You Stand Up And Embrace Your Light I’ve been a big girl all of my life, and there was a time when I tried to make myself smaller. As a child, I tried to do it physically by slouching and not standing to my full height.

I was cured of that habit by my greatest personal hero, my mother, Juanita “Mommy Nete” Hobson. My mother, who was the most powerful woman I have ever met, stood all of 5 feet 21/4 inches. I called her Admiral General Hobson.

When my mother caught me slouching, she would slap me. That’s right I said she slapped me, right between my shoulder blades. Do you know what you do when someone slaps you between your shoulder blades? You straighten up.

After she slapped me, she would walk around to my face, pull herself to her full height and say through gritted teeth, “YOU STAND UP!”

Since I have never been a fan of pain, she didn’t have to hit me too many times before I got the picture. Standing straight became a habit, but I don’t mind telling you I was delighted to go to high school and discover many of the boys were taller. Thank God for basketball players!

As an adult and a professional, it became more figurative. I would find myself involved in competitions in which I was not participating; in fact, I wouldn’t even be aware there was a competition. Quite often I would be blindsided by attacks from people I liked and thought liked me.

The lesson I learned from those experiences is that I have a light that’s very attractive. Most of the time, it is great. People want to be around me, talk to me, or get to know me. 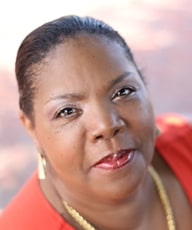 Dr. Lori M. Hobsonhttp://lorihobson.com/
Dr. Lori M. Hobson is an author, motivational speaker, and trainer. You can choose one of Lori’s signature workshops or have one designed especially for your organization. To learn more about Lori, visit her website. She received her Bachelor’s Degree in Psychology from Norfolk State University, a Master’s degree in Rehabilitation Counseling from Hunter College in New York City, and her Doctorate in Organizational Leadership from Nova Southeastern University in Florida.