“Tell the bully to stop.”

“Stand up for yourself and tell a trusted adult.”

“If you see someone being bullied, stand up for them.”

The basic anti-bullying messages haven’t changed, nor have they been updated yet the bullying continues. Clearly, something isn’t working.

Let us start with the goals of a bully. All they want is to gain control of a situation and draw power from it. Essentially, bullies feel powerless until their target reacts to their taunts – that is where the bully gets their power from.

Considering this, when we tell a bully to stop, they recognise their taunts are having the very effect they want to have, upsetting the target, and hence feeling more powerful than the target. This technique has the opposite of the intended effect.

What about ignoring the bully, according to John Lenhart of Flowcess, this is known as the Absolve technique. Let’s be honest here, when has a problem ever gone away by ignoring it? This option is like covering an abscess with a Band-Aid. The infection continues to fester underneath.

We often teach children to stand up for themselves but don’t show them how to (other than telling the bully to stop which we have already seen doesn’t work). Telling a trusted adult is the solve technique as identified by John. This results in three additional problems being created. Let us see how.

Another way bullying is addressed is using the Resolve technique. According to John, this is based on punishment and reward which is ineffective when it comes to changing the behaviour of the bully. Ultimately, a bully is after one thing – attention and this just becomes another way of getting it.

If you see someone being bullied, stand up for them. The question remains, how? Using Absolve, Resolve or Solve? None of these work as we have seen so far. In addition to this, the person who stands up for the target risks becoming a target of the bully themselves which is why there are so many silent bystanders. They choose to stay quiet to safeguard themselves.

So, what is the answer? According to John, the dissolve technique, which involves collaborative communication and unconscious confrontation.

Collaborative communication has three simple rules – make statements on yourself, ask questions, and answer questions. Unconscious confrontation? Perhaps it is best to illustrate this with an example.

A few months ago, the parent of a 10-year-old boy came to me for a private consultation. Her son was being bullied by a girl because he loved theater. This girl would tell him over and over, “You are a theater boy. Theater is only for girls.”

This is how I taught him to use collaborative communication and unconscious confrontation:

She said, “You are a theater boy!”

He replied, “Yes I am.” (Collaborative communication – making statements on himself, not on her).

She said, “Theater is only for girls!”

He responded, “Well, I am changing that. What are you doing to change the world?” (Both sentences are collaborative communication while the second one has an additional twist of unconscious confrontation). After saying this, he walked away. Walking away is key – leave the bully to wrestle with their conscience which you have awoken with this questioning.

The bully never bothered him again.

Another teen I worked with had a bully tell her, “Why don’t you just go kill yourself?” The unconscious confrontation I taught her to respond with was, “Would it be okay if I said that to you?” She did this, walked away, and the bully was left speechless never to bother this teen again.

Consequently, the bully has no option but to acknowledge (to themselves) that their destructive behaviour is intentional resulting in internal conflict for previous bullying behaviour. Alternatively, the bully may avoid answering the question and their unconscious brain will drain their energy towards future bullying behaviour. This is how to end bullying permanently – by dissolving it.

So, what is stopping us from teaching these effective techniques in schools today? I have reached out to many schools eager to teach this on a mass scale only to be declined. Why? Perhaps you can answer this question for me. 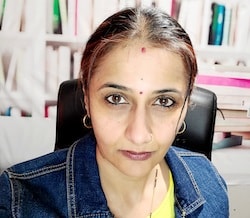 Kalyani Pardeshi
Kalyani Pardeshi is a CPA based in Canada who is an anti-bullying specialist. She grew up in apartheid South Africa and was sent away to a boarding school out of the country. It was the only way to ensure she received an education that wasn’t determined by her race. One consistent theme in her life was that wherever she went, bullying seemed to follow her, but she refused to be broken down by her tormentors. Being in boarding school meant that she not only went to school with her bullies, but she also lived with them too. She self-developed tools to help her nip bullying in the bud because the anti-bullying techniques taught in school were ineffective. Using her own tools, she took her power back.  Kalyani authored and self-published “Unbullied: 14 Techniques to silence the critics, externally and internally” in which she shares the very techniques that helped her combat bullying. Her book has won three international awards including The Book Excellence Finalist Award. She uses her experiences and what she has learnt from them to equip teenagers with customized tools of their own to combat bullying and heal the scars thereof because she firmly believes that it is easier to mould a child than it is to mend an adult. Furthermore, Kalyani grew up in a home where she was led to believe that she had to earn her worth and value because she was born a girl. She developed a deep lack of self-worth because of these experiences. This led to her bullying herself to prove her worth and value just to be loved and accepted until she finally burnt herself out doing so. Recognising the many ways in which she was bullying herself, she embarked on a mission to put an end to her inner bullying behaviours through simple, actionable techniques because self-love affirmations didn’t solve her problem. She now specializes in identifying ways in which we bully ourselves in the name of motivating ourselves and combatting this inner critic/bully. These presentations/keynotes are available for teens and adults.

What if Self-Love Isn’t the Answer?

Why Words Cause More Damage than Sticks and Stones