1.1 The Breaking of My Head

So, what makes me think that I have the knowledge or authority to describe to you what I think life is all about, and how to get the best from it? Well, I guess that after reading this book, you’d have to agree that I’ve lived quite a bit, for a start!  And my life hasn’t been the smoothest of journeys.

In fact, it’s been so rough at times that I am surprised I’m still alive to tell the tale.

This first part of my tale starts in the summer of 1982, at the age of 8 years old. My friend Nikki and I were out on one of our usual bike rides. It was a Saturday and a beautiful day, and my family was due to go down to the coast as we often did during the summer months.

I’d been in trouble the week before because I’d got a puncture in my bike tyre and my punishment was that I wasn’t allowed to ride my bike, but that was alright because my Nana (your Great Grandmother) was in charge for the morning, and she was unaware that I wasn’t allowed to ride my Fathers bike!  My poor Nana.  I don’t think that she ever really forgave me for that.

So, that morning I took my Fathers bike, and Nikki and I were doing our usual rounds of Steyning. We were coming down the steep hill with the park on the left at the bottom.  As we neared the bottom of the hill, I remember that we started to back-peddle; we did this a lot when we were riding, and I’m not sure why we did it, but on this beautiful summer morning this habit was to change my life forever.

You see, I’d forgotten that my Fathers bike had a back-peddle break and I skidded awkwardly at high speed.  Back then, wearing a cycling helmet wasn’t common, so when my head hit the curb by the side of the road it connected with a crack and I knew that I’d hurt myself pretty badly.  This was nothing new though as I was always hurting myself, with cuts and bruises a regular feature on my body.

I’d cut my left shoulder quite badly and the main impact was to the left side of my head, but strangely the pain was on the right-hand side.  My mother bathed me when I got home, and later on, she remembered where I’d said my pain was, and that single fact probably saved my life that day.

The rest is a bit of a blur and I can only construct what happened in my mind from bits and pieces, and from what people have told me about it afterwards.

The family decided to proceed to the beach as planned, but my condition worsened, and I started vomiting.  We quickly made our way to Shoreham hospital.  Here I passed out.

I’ll never forget my Mother saying afterwards that she wished that I’d been awake for the journey down to Southampton Neurological ward, as we were escorted down the M3 in an ambulance by no less than 5 police cars!  The surgeon listened to what my Mother had to say about the pain and immediately took me to emergency surgery.  He straight away made an incision and drilled into my scull where I had indicated the pain had been.  He uncovered a massive blood clot in my brain on the right-hand side.

You see, what had happened was that when the left-hand side of my head had hit the curb, my brain had bounced across and impacted against my scull on the right-hand side.  This in turn had caused a massive haemorrhage.

After the operation, I fell into a coma where I resided for 2 weeks.  It must have been the longest fortnight of my parent’s lives.  They both took turns staying with me and reading to me by my bedside.  It was during a reading of ‘Puck of Pooks’ Hill’ when my Father saw me stir for the first time.

The first thing I remember when I ‘awoke’ was the feeling of absolute and utter hopelessness.  I couldn’t move, I couldn’t see, I couldn’t talk, I couldn’t communicate at all; all I could do was hear and think.  I was scared.  I was conscious, but I was trapped inside a dormant body.  In years to come when I listened to the Metallica song ‘One’ it would bring back memories. It was about a survivor of the Vietnam war who was very badly dismembered by a landmine and was left with nothing but a conscious mind entombed in a torso, just wishing for death. Strangely enough, this became one of my favourite songs.

All I could do was think, and all I could think of was the fact that I was desperate for the girl in the opposite cot to shut-the-fuck up!  She was screaming and screaming and jumping around in her cot, and it was driving me nuts!

Interestingly, it was explained to my parents at the time, that having suffered a head injury, it was likely that the first word that I would utter when I regained consciousness would be a 4-letter swear word.  So, they all gathered around my bed eagerly anticipating 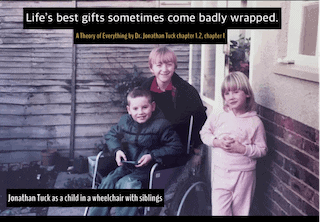 the profane torrent that I was about to deliver.  However, unlike you Alex, I didn’t know any swear words at that age, which left them all very disappointed. The first word I spoke was ‘hello’ to my Sister, your Aunty Ali.

I was bald; all of my hair had been shaved off and I now had a scar on the right side of my head which to all extent and purpose looked like a massive caricature of a penis that we used to draw for fun when we were kids.  I still push the tip of my finger into the spot of maximum indentation to this day and wonder what I am going to do if my hair thins much more or if I go bald.  At least I can say that it’s ‘Dr. Dick Head’ to anyone who might joke about it!

After the hospital days, I remember being stationed on a low mattress in my parent’s room and having a bell to ring if I needed anything.  I was given a 30% chance of surviving with a normal life ahead of me, the surgeons advised my parents not to expect that I would be anything more than a ‘cabbage’, which was acceptable terminology back then.  I was going to prove them wrong!

I think that because of the severe accident and injury to my head, I actually experienced a very good ‘head’ start on many people in life!

Firstly, it gave me indefatigable determination, and ultimately the knowledge that if you really want something, then you can achieve it, despite the odds, and despite what anyone tells you, so long as you believe it and have faith in yourself.  I notice this trait in you too, William, as when you set your mind to something, you seem to dedicate your full attention to it and display great determination, passion, and resilience.

And yes, I’d learned to swear by then, and enjoy contextual swearing (mainly) to this day!

Secondly, it gave me a platform very early on in life to develop my left-brain, right-brain balance.  As a result of the paralysis I experienced in my dominant right side, I was fortunate to be forced to learn to use my left side to do everything, including writing with my left hand in the early days.  To this day I’ve used my left side for many activities including holding my drinks, playing sports like darts, table tennis, playing pool, playing football and cricket, using the computer mouse, and smoking cigarettes.

On top of that, and for whatever reason, I’ve always been very positive, and able to see the good in any bad situation. This positivity has only increased as I began to realise everything I’m going to explain to you in this book.

I think it also made me very courageous.  It enabled me to see gradually, that if an opportunity was there, and if it was reasonably safe, then I had to take it because it may never present itself again. And I was damned if I was going to regret not having taken it.  My friends at University used to tell me that I had balls the size of planets.  I think much of it may have been more accurately attributed to stupidity and naivety back then, but I accepted the accolade!

In hindsight, I’m eternally grateful to the medical team for setting me those challenges back then. For setting the survival fire alight inside of me, and for ultimately giving me the strength to be who I am today.  Oh, and I’m especially grateful that they saved my life too. But that goes without saying!
____________________

Excerpt from A Theory of Everything, Things I Wish I’d Known At Your Age 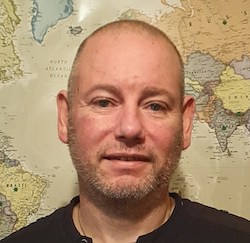 Jonathan R. Tuckhttps://atheoryofeverything.co.uk/
Dr Jonathan R. Tuck is a Holistic Energy Scientist who was introduced to quantum physics during his first degree. He completed his energy-centric doctorate at the University of Oxford in 2001. His deep interest in maths, frequency, vibration, and energy has served him well, and has been at the forefront of his work for the duration of his career, across the spectrum of scientific disciplines, and beyond. He’s studied human psychology and thought energy, and energy healing. He’s a Reiki Master Teacher who gives workshops explaining the phenomenon using quantum physics, and has a wealth of knowledge and experience in the health and wellbeing arena. In 2014 he cofounded a company who produce ultra-fast-charge energy storage devices, and has further interests and pursuits in energy and healing, for example using both metaphysical and electro-magnetic resonant frequency approaches. His pursuit of native healing and medicine, and pain relief solutions, was inspired by the ramifications of a serious accident that he experienced at the age of 8, where he became disenchanted with the current and established medical system. He performed deep research into the ‘truth’ about human health and wellbeing, and the abundance of other solutions, which have been known about for millennia in addressing health issues around the world. In many cases he’s used himself as a test patient for qualification and substantiation of the various approaches. His passion for understanding mental health issues from first principles has inspired him to research and develop many simple mind techniques, which have proven to be effective to reduce stresses and anxieties, and remove negative blockages and bias. Already an established author in the scientific community, his book ‘A Theory of Everything – Things I Wish I’d Known at Your Age’ was his first mainstream publication, which was originally written for his children. It provides a manual for life and is a step-by-step guide to raising your energy, vibration and frequency, and to attaining a more harmonious, joyful and purposeful existence as a human being on earth. One of the Keys to Developing Stability and Harmony, and Improving Your Mental and Physical Health, Your Life, and Your Interaction with Everything and Everyone in It and Around It, is in Raising Your Energy, Frequency and Vibration – Dr Jonathan R. Tuck