The natural gas industry, together with the oil industry, together account for an estimated 24% of all anthropogenic methane emissions. According to for instance the U.S. Energy Information Administration, natural gas is a fossil energy source consisting mainly of methane, which is a chemical compound with one carbon atom and four hydrogen atoms. The chemical formula for methane is CH4. 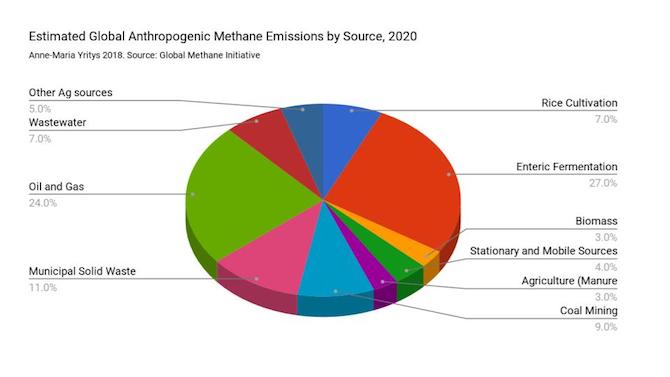 In OPEC ́s forecast for the world primary energy demand by fuel type from 2015 to 2040, the demand for gas will increase by a rate of 1.8% p.a., with the majority of the increase coming from non-OECD countries and the most rapid economic growth in the developing world. OPEC projects the global economy in 2040 being 226% in comparison to 2016, with 3/4 of growth coming from developing countries. China and India alone are projected to account for almost 40% of the global GDP in 2040. (OPEC 2017. World Oil Outlook 2040).

The OPEC acknowledges the relation between population growth and energy demand, however, considering a number of variables for instance in consumer trends. It also states how energy markets are affected by government policies and recognizes the need to monitor these on a regular basis, taking into consideration for instance the Paris Agreement and the Sustainable Development Goals, with energy efficiency and clean energy now trending development. The OPEC is closely monitoring worldwide energy market and policy developments, mentioning the USA, the European Union, China, and India at the forefront.

Furthermore, OPEC estimates that total world primary energy demand by fuel type from 2015 to 2040 will see an increase of 3.6% for gas, 1,5% for nuclear energy, 0.3% for hydro energy, and 4% for other renewables, while the demand for oil would decrease by 4.2%, coal demand decreasing by 5.1%, and biomass demand decreasing by 0.1% during the time frame. The OPEC identifies energy efficiency as a critical uncertainty for the energy market with policies concentrating on reducing emissions through a number of measures related to financial and fiscal instruments. (OPEC 2017. World Oil Outlook 2040).

The U.S. Energy Information Administration presents natural gas as a proportionately clean burning fossil fuel, although exploration, drilling and production have direct impacts on the environment, in addition to the fact that natural gas consists mainly of methane which is a powerful greenhouse gas. Leaks from natural gas-related activities such as pipelines are causing toxic anthropogenic methane emissions. Despite the many environmental and health risks related to fossil fuels such as natural gas, the global energy market will continue to depend on these.

The OPEC estimates that the highest growth in gas demand in the OECD region will be in OECD America, recognizing key influences related to the overall demand of natural gas and its dependency on multiple critical factors including gas supplies, competition,  regulations, and pricing.

For instance in Finland, the national Energy Authority reports that “The Finnish natural gas market has been under sector-specific regulatory supervision since the assertion of the Natural Gas Market Act in August 2000”. The natural gas market in Finland has currently no competition, with 100% of the natural gas is being imported through one pipeline from Russia and traded on the Finnish market by one single company. In Finland, the demand for natural gas has been in decline for several reasons, with natural gas accounting for six (6%) of total generation fuel mix in 2018, with the baseline for energy demand being market-based.

In its World Gas Perspectives report (2017), the World Energy Council identifies four key findings concerning the development of the world gas market: 1) gas is expected to be the only source of fossil fuel with a growing share of the world energy market until 2050, although the long-term future for gas is insecure; 2) the global gas market will shift to Asia, with demand in Europe and North America stagnating or even decreasing; 3) by 2060, worldwide electricity demand will double, posing a possibility for the natural gas market to further grow, unless governments and regulators decide differently; 4) the natural gas sector must innovate and become a cleaner source of energy – policies and societal change will have an impact on the future of the worldwide gas market. Despite having lower emissions than both coal and oil, gas is a fossil fuel which emits greenhouse gases.

Read one of my previous articles here: Why  Is Our World In A Freshwater Crisis?

Connect with me on Twitter @annemariayritys. For climate/environment-related posts only @GCCThinkActTank. Subscribe to Anne-Maria Yritys to receive my latest articles delivered personally to you.

Creativity Is The Essence Of Humanity