POWERED BY STORYTELLING ❖ INSPIRED BY THE BEST WRITERS ON THE PLANET

–The Story of Dred Scott and the Blow Family of Virginia

Are you ready for a film that can lift your spirits as Shawshank Redemption did?

Set in Antebellum America, a slave finds that his continued relationship with the white children that grew up with him is stronger than his desire to live a simple life. The result will have lasting effects on the history of the world. In 1857, the President and Chief Justice of the United States attempted to make slavery universal. Only eight children stood in their way, this is their story.

A Film to be displayed at the Smithsonian in Washington D.C. And based on Dred Scott’s Virginia By J A Hines

Dred was probably the most traveled popular servant in United States History. Scott and his family traveled over five thousand miles through 19th Century America. He briefly encountered four United States Presidents, two wannabe Presidents, an inventor, an explorer, a writer, and two freedom fighters. In his travels across 19th century America, he met two Native American chiefs that saw peaceful coexistence as a solution and two commanding Generals whose armies fought the greatest battles on American soil.

All of these people shared valuable insights on the major topic of the day that influenced Dred’s decision to seek freedom for his family.

These encounters with Dred are secondary to Dred’s relationship with the children he raised and grew up with spanning five decades during the first part of the 19th Century. A time that shaped the path of our country. 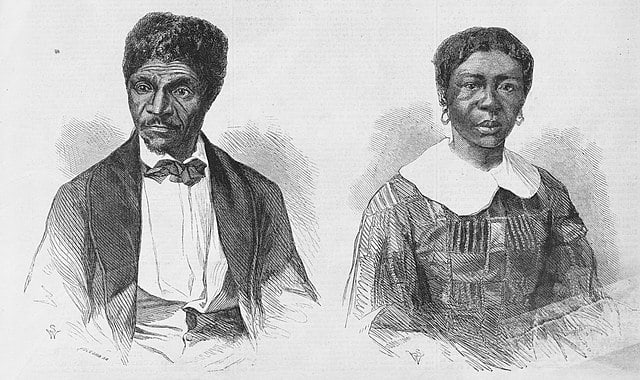 Dred Scott has been gone for months to the deep south. Harriet, his wife, is pregnant with their second daughter. She is due at any time.

I was elated to hear that you are among the living. It is hard to fathom that it seems like almost a year since I have seen you. My heart is overflowing with pleasure that I can hardly command words to communicate to you that you have a new daughter. Lizzy was born this week and is as fine and healthy an infant as you have ever seen. Mrs. Emerson named her to honor herself. She plans to sell both our girls. I have been delivering groceries for Samuel Russell. Mrs. Emerson worked me hard until Lizzy was born. I had one day off. I am tired but in good health. Eliza and I deliver groceries to a magnificent house about three blocks away. An older lady named Aunt Rachel answered the door. We became friends. Rachel introduced me to the Mistress of the house, Miss Elizabeth. I mentioned that my husband Dred has been away for many months in the deep south. Miss Elizabeth told me she grew up in Virginia with a servant boy named Dred. The more we described you the more it occurred to us we knew the same person. You my love. Elizabeth and I cherish that we have spent many hours together with our daughters. We both agree that they need to be protected from Mrs. Emerson and the lady on Morgan Street that sells babies. We must act fast before Irene Emerson takes them. Joseph, her husband, has introduced me to an attorney. He says a freedom suit will stop her from selling Eliza and Lizzy. My love for you is stronger than ever, please come home soon.

Lizzie benefited most from her family’s freedom by living the majority of ninety-nine years as a free person. She shared her freedom by helping raise her sister’s children after her sister died. Lizzie’s life spanned through the Civil War through World War II shunning publicity along the way.

She lived behind closed drapes largely in the shadows of the courthouse that decided her family’s fate. While she was eighty-five years old she would walk, rather than take the streetcar to pick up and drop off her niece. Lizzie feared anyone who would find out who she was until she died in 1945. She passed on memories of how freedom changed so much for her family, even if it could not change everything.

After the United States Supreme Court ruled on the Dred Scott Decision in March of 1857 there was a tremendous backlash. The Northern part of the United States including Frederick Douglass, a great 19th-century orator comments on the decision.

Dred Scott was an enslaved African-American man in the United States who unsuccessfully sued for his freedom and that of his wife, Harriet, and their two daughters in the Dred Scott v. Sandford case of 1857, popularly known as the “Dred Scott Decision”. For more information about this film please reach out to me below.

Jenny Hineshttps://sites.google.com/view/walkwithyou/
Jenny is a part-time Producer and Screenwriter for Walk With You, the story of Dred Scott and the Blow Family of Virginia, with an amassed social media following of over 100,000 subscribers.  Jenny is the Editor of four books, The Revolutionary Spirit, a novel sponsored by the Southampton County Historical Society (2009, Franklin, Virginia).  Dred Scott’s Virginia (2012, Franklin, Virginia), a historical non-fiction about Dred Scott and the Blow family of Southampton County, Virginia. The Historical Structures of Southampton County was released in April 2016 and Samuel Blow Hines, the story of a Judge, Bondage, and a President; a historical novel about a judge during the Nat Turner Rebellion released in August of 2016.  Jenny has solid analytical and critical thinking abilities, with the capacity to make logical decisions, through effective communication, and credits her studies at William Paterson University of Wayne and New Jersey and American Public University, Manassas, Virginia.  Additionally, Jenny is the driving force behind the Walk With You production company for upcoming films Dred Scott and the Blow Family of Virgina, The Esther, and The Kennedy’s Assassination What Really Happened.  Jenny holds particular interests concerning Humanitarian studies and Climate Change.

let's rediscover humanity together
"We rise by lifting others"

We are the Award-Winning publishing division of 360° Nation —presenting our life, culture, and biz multimedia digest as a hub of creative expression and personal growth. With an emphasis on action, our 850+ global contributors empower people to transition from knowing what to do to actually doing it —all complemented by syndication relationships with a choice group of equally innovative media outlets. Today and every day, we simply deliver the very best insights, intelligence, and inspiration available anywhere —doing it our way by placing our writers and our audience at the forefront. It's magical. It's evergreen. And quite frankly, it's just good stuff. Period.