This is a continuation in the “He Said, She Said” series: A conversation about early memories of radio and how it’s a different world.

Scott:  You know, I was thinking this morning that the first thing we do every day is turn on a television. I mean, we are so dependent on television now. What did we do before television?

Sandi: Well, we read newspapers, but mostly we listened to the radio. I remember turning on the radio to get our news or our music or sometimes soap operas…programs like that. What are your earliest memories of listening to the radio?

Scott: The first time I listened to the radio, I was living with my grandparents in West Virginia and that was family entertainment night. You know, my grandmother sat on a rocking chair and my grandfather sat on the couch and I sat on the floor beside him. And Pap would always tap his feet as he listened to the music. My grandfather liked Grand Ole Opry, and I remember one particular show called the Louisiana Hayride.

We lived on top of a mountain, and the reception was really bad, and so the music would fade in and out.  And every time the music faded out, he’d stop tapping his feet.  When the music came back, he starts tapping again.  One evening I asked him why the music faded in and out.  I thought maybe there was something wrong with the radio. And I’ll never forget what he told me.  He said that we were listening to a traveling band that was traveling around the mountain.

That was a big joke in the family for years.

Sandi: I lived with my grandparents, too, and my grandmother loved listening to the Grand Ole Opry. I remember listening to a lot of comedy shows, too. She especially liked Minnie Pearl.

Sandi:  A lot of the comedy programs started out on the radio and then jumped to television.  George Burns and Gracie Allen was one of our favorites.  We watched reruns years later when the kids were little.

Scott: George and Gracie became a “good night” routine to a lot of people.

Sandi: Before long we thought we had lots of choices to listen to… music, news, comedy, and even mystery programs. One of the things I remember about listening to the mystery programs on the radio was the sound effects.  We didn’t have bright, bright lighting, and so at night, those dim lights added to the mood of the sound effects… a creaky door or footsteps on the stairs.  It really felt like you were right there in the action.

Scott:  You know, so many times you heard the same programs all the time that you’d learn the voices.  You knew exactly who was on even if you walked into the room in the middle of the program.  I remember when we thought it was really high tech when they put a clock on the radio then later you could set your radio to come on at a certain time or in the morning to wake you up.

It sure is a different world. 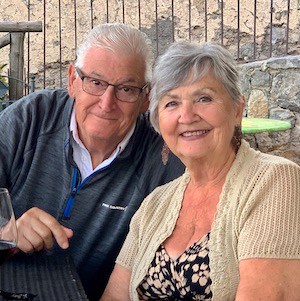 Scott & Sandi
Scott retired from Goodyear Tire & Rubber Company in Ohio after 40 years of service. While working every shift imaginable, he made time to coach softball and basketball for summer teams as well as high school, both boys and girls teams. Sandi was wife, mom, and homemaker for most of those years. They have 4 children, 6 grandchildren, and a great-granddaughter. They are very fortunate to spend most of their time in sunny, warm southwest Florida. In 56 years together, they’ve seen and experienced many changes. As Scott likes to say, “It’s a different world” …especially the world we’re living in now.