He looked down at the valley of this war-ravaged country. Dusk was spreading its blanket over the landscape, but he could not help but admire the beauty of the mountains in the background. Snowcaps covered them even in this sizzling season. For Americans, those mountains were treacherous, but the enemy certainly knew how to navigate the rocky terrain, hidden from the opposition. This late hour was bringing relief from the oppressive heat as sweat trickled down his shirt. He knew, however, that he and his comrades were fortunate that it was scorching but without humidity.

The assistant leader reflected on his life, reminding himself he was where he was supposed to be. He chuckled at his mischievous childhood acts, thinking back how his mother found him hanging from a fence by the hood of his sweatshirt. There were other antics, but his family recognized, “Oh, that is just him. Here he goes again.”

He thought about his enlistment, realizing that his DNA embodied the conflation of adventure and serving. The assistant leader acknowledged that his journey incorporated risk and danger, but that never deterred him. Many wondered why he offered his holiday leave to others, but he never gave it a second thought. The assistant leader decided that as a single man, why not? He had no problem availing himself while his married compatriots spent precious time with family. Someday, he surmised, it might be him, and he would hope that one of the young pups would do the same for him.

As he looked over the valley, he listened carefully for any sounds indicating a raid. Earlier, the helicopter arrived with sorely-needed supplies. Although the landing was soft and seemed unobtrusive, the assistant leader was worried about the insurgents detecting its presence. He listened carefully, walking back and forth.

Nightfall arrived, and suddenly, the assistant leader heard the buzzing. His chest tightened, and he began taking deep breaths. The noise became louder. Suddenly, out of nowhere, the patrol was under attack. The assistant leader yelled to his subordinates, “Take cover.” He was able to see the insurgents who somehow managed to land above the American patrol in two different positions. He radioed for artillery and close air support, but time was not on their side. The opposition began firing on the Americans. The assistant leader watched as one staff sergeant was shot and killed. Next, one of his privates went down, immobilized between the enemy and the Americans. When another staff sergeant, head of the sniper team, offered to rescue the injured brother, the assistant leader yelled, “That’s my guy. I am going to get him. Cover me.”

He began moving toward the injured soldier, dodging bullets that appeared to come from everywhere. “I am coming for you, brother.” He got within three feet, but the machine-gun and RPG fire intensified. He thought to himself that two wounded comrades would not be beneficial for anyone. He took a breath, looking to his soldiers to give cover, and tried again, running toward the target.

Similarly, the onslaught of artillery from the enemy was too close for comfort. He pulled back one more time. The assistant leader sighed. With his boot, he quickly drew a number 3 in the sand. “Ok, three strikes you are out, or three is a charm. I am going with the lucky charm.” With herculean determination, he made the third attempt while his brothers did their best to protect him. As he got close, the courageous leader felt the hit by an RPG that seemed to come out of nowhere. Everything began moving in slow motion. He ignored the pain and crawled towards cover. A few of his comrades managed to reach him. Their beloved assistant leader indicated he was cold and knew he was leaving this earthly life. He told them he made his peace with God. “Please tell my parents I love them.” The leader began seeing a bright light, hearing voices of fallen soldiers who left before him. He was returning home to a stunning city on a magnificent hill, unimaginable to the human mind, where he would join his glorious siblings in arms, who also made the ultimate sacrifice.

I had never heard of Jared Monti until 2009 when his picture appeared on the front page of the Wall Street Journal. At the time, President Obama signed the authorization for Mr. Monti to receive the Medal of Honor for his exceptional action. He became the second Medal of Honor recipient from the conflict in Afghanistan after Navy SEAL Michael P. Murphy, who received the medal in 2007. 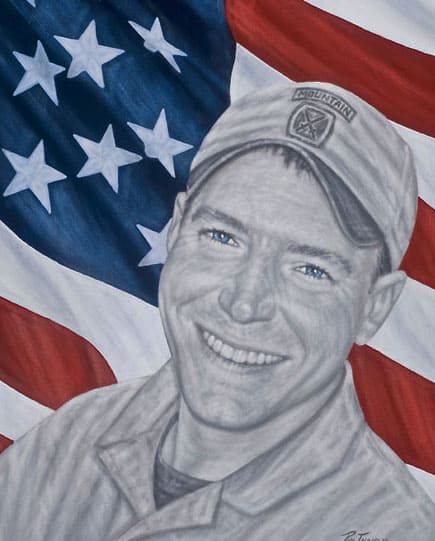 Tears streamed down my face as I read the story of this remarkable man who grew up in my home state of Massachusetts. Some months later, Investors Business Daily also spotlighted Mr. Monti in their Leadership section. I cried again.

Jared Monti is one of many who served our country selflessly. In celebration of Memorial Day, all of us should bow our heads in thanks to all of the soldiers who made the ultimate sacrifice. With all of the strife unfolding in the United States, remember, we have the freedom to express ourselves and would not be able to do so in many other countries. For those of you who are ashamed of our country, think about the fact that you would be imprisoned or worse, tortured or executed for proclaiming your unhappiness with the state in many other parts of the world. I hope none of us take that for granted.

Also, my sisters, you forget your good fortune. Yes, bad things occur in the U.S.A, but there is something called laws that give us equal value to men. Try living in another country where treatment of women can come in the form of a chattel or sex toy. Even in some parts of Europe, women are becoming increasingly unsafe. I suggest everyone read Ayan Hirsi Ali’s book, Prey. You will receive a wake-up call.

In the meantime, again, let us observe Memorial Day with gratitude. Perhaps, we might even imagine Mr. Monti and the other extraordinary fallen soldiers smiling from afar.

Darlene Corbetthttps://darlenecorbett.com/
Darlene Corbett views herself as a life-long learner, a pursuer of excellence, a work-in-progress, and a seeker-of-the-truth. She is also referred to as the "Unstuck Expert" in her many roles. Why? Because for over thirty years, she has been assisting people to get unstuck. Darlene's primary roles are now Therapist, Hypnotherapist, and Author/Writer. Although she loves speaking, it is now secondary and done mainly through her podcast, "Get Unstuck Now. Because of her wealth of experience, Darlene began putting her thoughts on paper.  Many of her blogs can also be found on Medium, Sixty and Me, and DarleneCorbett.com. Penning these articles set the stage for her first book, "Stop Depriving The World of You," traditionally published by Sound Wisdom. Being a believer in pushing oneself as long as one has life, Darlene has tried her hand at fiction, hoping to have something completed in the no-so-distant future. Over the years, Darlene has been described as animated or effervescent which contradicts the perception of a psychotherapist. She firmly believes in the importance of being authentic and discusses platinum-style authenticity in her book.