I happened to read an article on Bloomberg entitled, “Extreme Heat Uncovers Lost Villages, Ancient Ruins, and Shipwrecks”. Here’s an excerpt for reference:

The first thing that jumped out at me was weather. As anyone who’s paid the slightest bit of attention to the IPCC and the western governments that subscribe to and exploit its shibboleths to redistribute wealth knows full well, this isn’t weather. It’s climate change. Weather is just a word the climate-deniers use to explain atmospheric and meteorologic conditions and phenomena like heat, cold, rain, snow, floods, droughts, tornados, and tropical storms that are caused entirely by anthropogenic climate change.

Then There Are the Questions
The more I read, the more curious I became.

In a larger context, won’t the melting of all the glaciers on earth caused by climate change yield enough water to compensate for the droughts caused by climate change? It should be a wash (no pun intended). If the earth’s water cycle is constant, making the volume of water on the planet constant, isn’t drought just a distribution problem? That should be a cinch to fix. 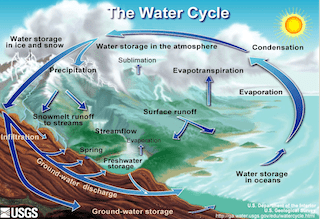 All we’ll need is the electric excavation and earth-moving equipment that will be necessary to dig the requisite trenches (no fossil-fuel-driven internal combustion engines for us). Then all we’ll have to do is lay the appropriate amount of organic piping to carry the water. And once we set up enough solar- and wind-powered pumping stations, we’ll be able to move the water to where it isn’t. Duck soup.

Once we have our environmentally harmless, climate-friendly global water-distribution system in place, the only thing we’ll have to decide is whether we want all those lost archaeological treasures and forgotten history, shipwrecks, corpses, ghost villages, ornamental gardens, and ancient cities to remain exposed — or whether we want them all back underwater again.

And given the fact that we actually believe we can influence the climate of an entire dynamic and ever-changing planet, a management decision like whether we want all those lost archaeological treasures and forgotten history, shipwrecks, corpses, ghost villages, ornamental gardens, and ancient cities to remain exposed or to be underwater should be a snap.

No matter what else we might be, we’re masters of avoidance and self-delusion.

Science can’t be settled. Anything that can be settled isn’t science. Settled science is a signal. It’s a signal to stop thinking: “Hey! You there! What are you thinking about? What are you saying? We have this all figured out, and this is no time to be questioning our motives, examining our agenda, resisting what we tell you to do about it, or to be concerned about the money we take from you to support our agenda.”

It’s easier to go along than it is to question anyone, especially ourselves.

People who don’t have their own houses in order should be very careful before they go about reorganizing the world … People have things that are more within their personal purview that are more difficult to deal with and that they’re avoiding … the way they avoid them is by adopting pseudo-moralistic stances on large-scale social issues so that they look good to their friends and their neighbors. (Jordan Peterson)

If we get our own houses in order, we’ll be shocked at how many things take care of themselves.

Pick a Card, Any Card