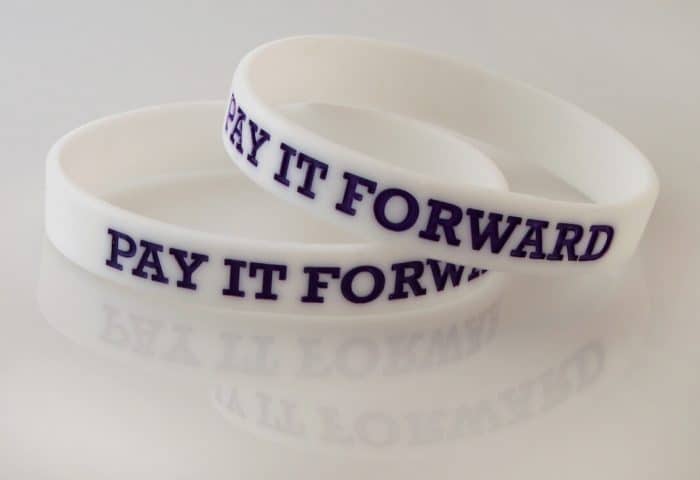 No act of kindness, no matter how small, is ever wasted.

A mother wanted to teach her daughter a moral lesson. She gave the little girl a quarter and a dollar for church “Put whichever one you want in the collection plate and keep the other for yourself,” she told the girl. When they were coming out of church, the mother asked her daughter which amount she had given. “Well,” said the little girl, “I was going to give the dollar, but just before the collection the man in the pulpit said that we should all be cheerful givers. I knew I’d be a lot more cheerful if I gave the quarter, so I did.”

Pay it forward. We hear it a lot and conceptually we embrace it. It makes us feel good especially at this time of the year. But as leaders how are we doing it?

My intent here is not to generate a checklist of “to do’s” like opening doors, and saying hello. Not that those things aren’t worthwhile; but I’d rather explore the mindset of a pay it forward leader. Here are three traits.

Paying it forward begins in the heart. Before any encouraging word flows from your lips and before anything flows from your wallet in a monetary contribution – it passes through the heart. Leaders who pay it forward are those with a giving mindset and understand that value given is value added.

Tangible acts of paying it forward: volunteering, mentoring, etc. are extensions of a pay it forward mindset. Another name for it is servant leadership. John Maxwell said it best,” People don’t care how much you know until they know how much you care.” The hands and heart of a leader are a powerful force for good when it flows out of a heart of compassion.

Pay it forward leadership on the surface may come across as “random acts of kindness” to some, but for the pay it forward leader it’s more about a habit developed over time. Over time it’s become a lifestyle not an isolated event.

As I look back over my thirty plus years in leadership I see a common thread among the successful leaders I know and have met: they are generous, they have big hearts, and they always pay it forward.

Connecting Your Dream To Your Reality

Why Can’t You Retain Top Talent?