Why is it 90% of drivers consider themselves to be better than average, 65% of Americans believe they have above-average intelligence and most of us believe we are more likable and honest than the average person?

To make sense of these mathematically impossible statistics, you have to know McArthur Wheeling  One cold morning, MacArthurWheeler walked into a bank in Pittsburgh, Pennsylvania and robbed it at gunpoint. A few hours later, he robbed another. Even more unusual? He wore no disguise or mask of any kind. His face was plainly visible and captured on surveillance videos of both robberies. An hour after the police released the video footage to air on the local nightly news, an informant who recognized Wheeler contacted the police.  Wheeler was arrested the same day.

Robbing two banks in one day without a disguise isn’t what earned him the title of “World’s Dumbest Criminal.” During his interaction with the police, he was incredulous as to how he was caught. After all, he knew his chemistry.  Wheeler knew that lemon juice could be used as invisible ink –you can write on paper with lemon juice, and it will be invisible until the paper is heated when the juice oxidizes and turns brown.

Applying the same logic, he believed that if he applied lemon juice to his face, he would be invisible (at least to the cameras) as long as he stayed cool. His rudimentary chemistry knowledge let to his arrogant confidence that he’d outwit the police and the disbelief that he was caught. “But I used the juice,” he said to the arresting policeman.

Cornell University profession David Dunning happened to catch the story in the 1996 edition of the World Almanac. He and his graduate student Justin Kruger caught the story and recognized it as more than stupidity. They theorized that people who are ignorant or unskilled in a particular subject area tend to believe they are much more competent than they are.

Bad drivers believe they’re good drivers, cheapskates think they are generous, and people with no leadership skills think they can rule the world. How hard can it be?

The theory is based upon the notion that we all have pockets of incompetence with an inverse correlation between knowledge or skills and confidence. A lack of expertise causes us to make mistakes. But, because we don’t know what we don’t know, we don’t even recognize them as mistakes. In a paper they published called Unskilled and Unaware of It, the Dunning-Kruger effect officially became a thing.

Across 4 studies, Professor Dunning and his team explored humor, grammar, and logic. And they found that participants scoring in the bottom quartile grossly overestimated their test performance and ability. In one of the studies, the students estimated how their ability to “identify grammatically correct standard English” compared with others. The lowest-scoring students grossly overestimated their abilities. Those who scored at the 10th percentile (i.e. they scored higher than only 10% of others) rated their grammar abilities at the 67th percentile.

And it’s not just a quirk of students. You can find examples of the Dunning-Kruger Effect everywhere. One study of nationwide high-tech firms discovered that 32% of software engineers rated their skills as being in the top 1% of their company. In a classic study at the University of Nebraska, 68% rated themselves in the top 25% for teaching ability, and 94% rated themselves as smarter than their faculty peers. Another survey found that 21% of Americans believe that it’s ‘very likely’ or ‘fairly likely’ that they’ll become millionaires within the next 10 years. All of these examples violate the laws of mathematics. 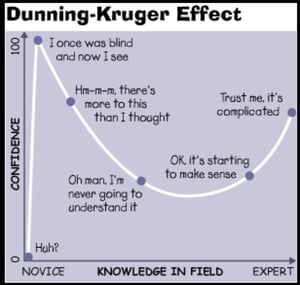 Those who have the slightest bit of experience think they know it all. Then, as people gain experience, they begin to realize how little they do know. This is the point at which they search out the knowledge they need and build their expertise. Those at the level of genius recognize their talent and demonstrate the confidence commensurate with their ability.

So, how can you overcome the Dunning-Kruger Effect? A good first step is recognizing that we are pretty bad at self-assessment. It’s a skill that requires work.

The best second step may be to consider the following story:

A university professor went to visit a famous Zen master. While the master quietly served tea, the professor talked about Zen. The master poured the visitor’s cup to the brim, and then kept pouring. The professor watched the overflowing cup until he could no longer restrain himself. “It’s full! No more will go in!” the professor blurted. “This is you,” the master replied. “How can I show you Zen unless you first empty your cup?”

If you already know everything, it’s impossible to learn anything.

The Fundamental Error We All Make

Politics are Killing Us – But Kittens May Be the Solution