The Universality of Nature’s Processes

Rod King wrote a pioneering post on ZICO Philosophy. “But, Fractal Gridding can be used to express ideas in a way common writing systems cannot. As an example, I present a Fractal Grid of the “Z.I.C.O. Philosophy” which is inherent in Fractal Gridding.

The ZICO Philosophy assumes that there are two basic processes in nature: deconstruction and construction. 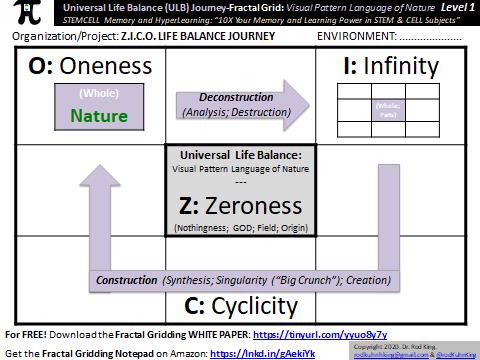 Increased energy disrupts the hydrogen bonds between water molecules. Because these bonds can be created and disrupted rapidly, water absorbs an increase in energy, and temperature changes only minimally. This means that water moderates temperature changes within organisms and in their environments. As energy input continues, the balance between hydrogen-bond formation and destruction swings toward the destruction side.

Again, water is amenable to the law of nature and its two processes of deconstruction and construction.

The PDCA Cycle consisting of the four blocks of plan, do, check, and act. For this cycle to be nature-like, it has to go through the two processes of construction-deconstruction.

Learn- unlearn is an example of construction-deconstruction. For example, the Four Blocks program — based on the premise that not all children learn in the same way — integrates four language arts areas into reading instruction. Those areas are guided reading, self-selected reading, writing, and working with words.

Again, it is four blocks with the two processes of nature learn (construction) and unlearn (deconstruction).

Creativity bases itself on constructing many ideas and deconstructing them into few selected ideas.

What makes humans bond together?

The question that occupied my mind with water making almost 60% of the human body is also responsible in any degree to how humans bond together. Bonded water keeps changing with water-water bonds breaking and new water-water bonds forming. This is true unless the water is trapped and has a more stable structure. It is a continuous construction-deconstruction process.

Do people bond to each other permanently or do they keep breaking their bonds and forming new ones until humans are “trapped” where a more stable human bonding structure emerges?

Are bonding in social networks emotional or more based on transient interests? Why then do we see the flux of people leaving and new ones joining social groups.  Are they water-like or ice-like? Is the warmth of trust strong enough to keep the “fluidity” of such bonds?

I tend to say that human bonds are closer to be like water- deconstruct and reconstruct. Is trust getting weaker for these human bonds to remain in a state of dynamic change than they used to be before?