The Strange Tale Of Why Companies Construct Such Massive Buildings

When the producers of the 1998 film, The Matrix, depicted the height of human civilisation, they showed a picture of the Twin Towers in New York, surrounded by mountains of other skyscrapers. Morpheus tells Neo that humanity reached a peak “sometime in the early 21st century” and since then, it has been downhill.

We intuitively see the middle of great cities as depicting the best that humanity has to offer. The buildings here are often the most civic and impressive, dominating the streets on which people build them. But it is the economic and commercial underpinnings that make them happen.

Researchers have several theories for why buildings in the middle of cities are so impressive. At root, the explanations are fundamentally economic, but there are interesting takes on what is going on here. It’s not just about making the best use of the available land. More is happening than meets the eye.

Building Height Is About Status

Take a look at the development timeline of most major cities around the world, and you will see an interesting pattern emerge.

At the start of a cluster of skyscrapers, a single lone building will go up. Developers want to see office spaces with spectacular views over the surrounding city – a unique differentiator that sets them apart from everyone else.

Then, as time goes by, other buildings start popping up around the original. They are looking to benefit from the views but also grab some of the prestige of the first tower.

As things go on, though, new developers start thinking about how they can make their buildings unique. While attractive designs play a role, the most obvious solution is simply to go a step higher. Adding more floors is the easiest way to make your building the most attractive among all the competitors.

Researchers have often wondered why the height of buildings doesn’t always reflect the land value of a particular location but the size of the surrounding towers.

And that’s what makes these clusters of tall buildings follow a similar pattern. Developers have an economic incentive to go higher, even if the land values do not warrant it. That’s often why you see these vast buildings go up outside of the commercial centre – just like with the shard in London.

Interestingly, it is not banks or real estate businesses that are the driving force behind ultra-tall buildings. The data suggest that the primary industry pushing rooftops towards the sky is the legal sector.

The reasons for this aren’t immediately apparent when you view the industry superficially. After all, lawyers can locate pretty much anywhere they like. Why would they need to rent expensive downtown offices?

The reason comes back to the type of market in which law firms operate. Unlike banking or even real estate, law is a highly competitive and cash-rich industry. Lawyers get paid a lot of money, but they also find it challenging to differentiate themselves from everyone else. After all, one lawyer is usually pretty much the same as any other.

An obvious solution is to locate in offices that are higher than their competitors. It might sound trivial, but hosting clients while looking down on offices occupied by rivals can generate a substantial competitive advantage. Who would want to go to your competitor if you’re the top dog? 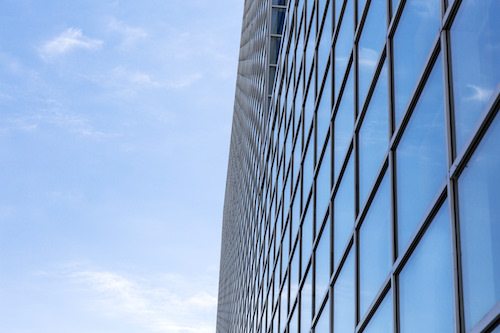 Larger buildings also tend to offer greater economies of scale. Tesla’s Gigafactories for both manufacturing and assembling batteries are among the largest buildings in the world. You could have a setup where you have several dozen smaller facilities churning out the same number of individual cells. But when you do the math, you discover that this method works out as more expensive.

The reason for this has to do with the scale that large factories can use. If you have limited floor space, you can only process a small number of products at any given time, meaning that you can’t reach your output demand. Instead of routing all deliveries to a single location, you wind up having to manage a much more complex supply chain.

Furthermore, the volume of a building grows much faster than any of the dimensions. So if you lengthen a building by 2 per cent and widen it by 3 per cent, you wind up with a volume increase on the order of 10 per cent. Thus, you actually get increasing returns to scale when you make buildings bigger. You can spend your budget more efficiently on things like panelling or structural materials and commercial drainage.

There’s also the flexibility issue. Let’s say that you’re Elon Musk and you want to change how you use your facilities. If you have a small factory, you have a choice between producing one widget or another. But if you are Musk, you can divide up the space pretty much how you’d like – and even add extensions if you require them.

We’ve already seen this playing out at Tesla. Company executives are continually changing the layout of the battery production line, as we saw on “Battery Day.” But this kind of innovation is only possible because of how easy it is to rearrange processes. If it was more difficult, then disrupting the setup wouldn’t have been possible.

Once you get to scale, you typically find that you have other market advantages too. Small-scale companies have to continually negotiate with suppliers and logistics companies in an attempt to get them to provide the services that they need. The problem is that these larger firms are only interested in volume purchases. If you want less-than-truckload, you’ll pay a premium for it.

When you are a large commercial enterprise, though, you suddenly get market power. Suppliers become dependent on you – not the other way around – and everyone wants a piece of the pie. After all, you can always go to somebody else.

Being in this position is only possible, though, if you have facilities in place to deal with large orders. Logistics companies like simple patterns. They don’t want piecemeal operations where they can help it.

There’s a final reason why many companies are making their buildings bigger than ever before: the argument from sustainability.

Large tower blocks might look like a blot on the landscape to many people. But for those interested in the environment, they’re an opportunity to reduce urban sprawl and keep cities contained. Suburbia extends miles and miles from the economic heart of most cities, even though most of the real value for the local economy is within a few square miles.

The idea now is that companies should start building mixed-use skyscrapers where workers live on the upper floors and then go to work on the lower floors before returning home. The commute is a simple elevator ride instead of a long journey on the train.

How this change will affect the socioeconomics of work remains to be seen. It seems very similar to the nineteenth-century model, where factories would literally build worker houses on-site to keep the labour force close by. But whether workers will enjoy being just a few floors above their bosses remains to be seen.

Mixing commercial and residential might have some unexpected advantages, though. We are, for instance, much less likely to see urban degeneration where people and companies occupy the same site. Everyone has an incentive to keep the area neat and tidy without graffiti. The idea that businesses need to be close to each other is another idea that economists love. For them, it explains why incomes are so much higher in the middle of town than they are in the suburbs. You have a greater exchange of ideas when cities are three-dimensional compared to their two-dimensional counterparts.

Remember, it isn’t just individual businesses like Tesla, that are making giant buildings. Developers themselves recognise the economic advantages that they bring their clients. The more individual companies they can pack into a building, the more companies can work efficiently with each other, form relationships, and feed off each other. A large office tower is often a thriving economy of its own, providing facilities that firms need to get partnerships off the ground.

You’ll often notice that most major global cities have special vertical districts that are very different from the surrounding community. Often they are highly planned, like Hudson Yards in New York or Canary Wharf in London. These areas didn’t grow up organically. Instead, planning corporations recognised opportunities to bring major firms closer together and provide shared facilities. These regions are often so successful that their rents are higher than the traditional city centres, like downtown Manhattan or the City of London. Companies want buildings that nourish their workers, provide plenty of light, while also bringing them into close contact with people from other firms.

From the preceding discussion, the power of large buildings is clear. Expect them to become a more prominent feature of the world as we go deeper into the 21st century.