The smell of fresh-brewed coffee always puts a smile on Hunter’s face. He poured a cup and headed to the porch, sat down in the rocker, held the cup of coffee to his nose, and enjoyed the aroma of this seemingly magical liquid that could jump-start life in an instant. “Aah, I love this smell he said out loud and then took a sip. It was like the smell of bacon cooking and how either one could fill every nook and cranny in the house. One of the simple pleasures in life he thought. He took another sip as he leaned back into the rocker. “Good morning Charlie,” he said as the rooster crowed from the fence post in the yard, signaling to him the start of a new day. “I need to head to the city today and pick up some things we just don’t have in our little town.

He was not much on going to the city because it was always busy. Too much hustle and bustle he thought and not as comfy as his little town and besides he can’t ride Whiskey to the city to pick up things like he would in his little town.

He finished his coffee, fed the animals, grabbed a piece of toast, another cup of coffee, and headed to the old 55 Chevy stepside pickup. He whistled for Remington, his yellow lab, who eagerly jumped into the front seat to ride to town. He cranked up the old truck, listened to the engine run as smoothly as it did the day it came off the car lot, dropped it into 1st gear, eased off the clutch, and headed down the old dirt road to the city. Remington sitting in the passenger seat looking out the window not missing a thing as the two rode along. “What do you think old boy? It sure is a pretty day to take a ride, don’t you think?” Remington looked over at him with a seemingly slight grin on his face, tongue hanging out, and gave a slight nod in approval before looking back out the window.

They rolled into the town of Uvalde and up to the Western Auto to pick up a new battery for the Farmall tractor, some ammo for the rifle and shotgun shells, and some other odds and ends before heading to the Rexall Drug store. Hunter always went to the drug store to the soda fountain to get a root beer float and an ice cream to go for Remington. He watched him devour his ice cream and then they headed back to the farm after a stop at the local feed store for supplies for the critters. When he arrived, he opened the door, he and Remington got out. “Let’s put this stuff away and you can come with Whiskey and me to the river today Remington.” He wagged his tail, barked, and headed to the barn.

Hunter grabbed his gear, mounted Whiskey and the three of them headed to the river. It was a beautiful day as they lazed around the river with no one in sight. After splashing around in the water, Whiskey and Remington found some shade to lay under while he fished. This was just what he needed with all of the stress that had been going on in his life. He had his best friends with him and could not think of anything better than that moment in time. He smiled laid a perfect cast out, sighed, “This is the life he said. Can it get any better than this?”

He was at a loss for words, something that does not happen to him often.

As he started another cast he heard a voice behind him say, “Do you always fish in your boxers”? Startled he spun around, and there, sitting on a rock in the water was the prettiest little blonde that he had ever seen. He was at a loss for words, something that does not happen to him often. “What’s the matter? Cat got your tongue” she asked? He collected himself for a second, “Where did you come from? I mean no, I can talk. You just startled me. How long you been there?” She giggled, “Long enough” then smiled. “Long enough for what?” he asked. She smiled even bigger and started towards him as she said “Long enough to learn a few things.” “Like what?” he asked as he was making his way to shore to grab his pants. “Don’t put them those on account of me. I already saw you in your boxers, no sense in hiding now” she said with a giggle.” He stopped and turned to face her, standing in the water about 12ft apart. “Who are you? What is your name? Where did you come from? Do you live around here? How come I never seen you down here before?” “Easy cowboy, one question at a time. Let me answer a few before you throw any more at me.”

Her lips glistened as she smiled at him and her beautiful blonde hair moved with the wind. He could not help but stare at her beauty as she stood before him in the water. She had on a white t-shirt that was tied in a knot at the waist and covered a black swimsuit top. She wore cut off shorts that were fringed around the edges. She was about his height, a slight to medium build and long legs. She was darkly tanned, which made her golden hair stand out even more. He could not help but stare at her as she spoke and he never heard a word she said.

With that, she smiled, spun around, laughed, and ran off. He stood there watching her as she disappeared out of sight.

“Cowboy! You ok? Did you hear anything I said?” “Huh!” he exclaimed. “I am sorry, what did you say again?” “I said my name is Savannah, I am from here but you don’t remember me, and it has been a long time, but I remember you. She made her way out of the water, petted Remington on the head, and patted Whiskey on the neck as she started off upstream. “Hey wait.” he hollered. “Where are you going? Where do you live? Can I see you again? How can I find you?” She spun around blew him a little kiss and smiled. “I will be around and you will figure it out. You used to be pretty smart. By the way, you’re not so bad looking yourself, cowboy. I saw how you were checking me out.” With that, she smiled, spun around, laughed, and ran off. He stood there watching her as she disappeared out of sight. He looked back at Whiskey and Remington, “she is so beautiful, I have to find out who she is and where she lives.” He gathered up the gear and the three of them headed up the mountain to the house. His mind was still spinning and he was at a complete loss of words for the first time in his life.

For the rest of the evening, she was all he could think about. “Savannah. What a beautiful name for a beautiful girl. Who is this person that I cannot get my mind off of and why can’t I remember who she is?” He sat in the rocker on the front porch, drinking a glass of tea, watching the sunset with Remington by his side. A peace came over him for a while and all of a sudden, he did not fell all alone in the world.

“Business was bustling at the diner as Savannah poured a customer cup of coffee and headed back to the counter. She had a smile on her face and she often found herself staring out the window and daydreaming of the river.”

Chapter Two: “The Visitor” – Part One – To be continued… 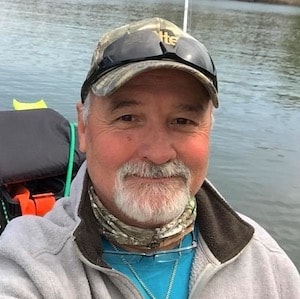