The Rebirth of Business

–No matter how sophisticated we get, it will always be our values that define us.

It doesn’t look like the world will go back to being how it was before, the life we knew. I also don’t think we’re headed into some apocalyptic vision. Just the opposite. This whole crisis is like a new birth, and we’ll need to take advantage of it to make some changes in our lives.

The word “crisis” doesn’t deserve the bad image it has. In English, a crisis is “the turning point for better or worse in an acute disease or fever,” or “an emotionally significant event or radical change of status in a person’s life,” according to Webster’s Dictionary. So even though it’s a dramatic situation, it isn’t necessarily bad.

The Hebrew word for “crisis” is really interesting. Mashber, which is Hebrew for crisis, is the word that ancient Hebrew texts used for talking about birth. The mashber was the special chair on which the woman in labor sat until she delivered (Talmud, Arachin 1:4). Also, in the Bible (Isaiah 37:3), the word mashber denotes the opening of the birth-canal right before the newborn baby emerges to the world.

What does this mean? We will have to review the current situation with fresh eyes and decide what’s really necessary and what’s redundant.

Suddenly we don’t feel so bad about airport closings; it’s not so terrible to be at home; and working from home isn’t so bad. I’ll stop here and let you decide for yourself what you really need to sustain yourself.

The economic world will have to adjust itself to the new patterns of behavior after the crisis, and will probably make some drastic changes in my opinion.

The changes that the business world will need to make will not be about the organization and technology — but rather the new product. Because our next big thing will be based on the correct relations between us. The more that companies invest in this area, the greater their chance of success.

I’ve been reading some interesting things written by Michael A. Eisenberg: Six Kids And A Full-Time Job, who understands our need for change. I love the way he gets that we’re transitioning between different eras in human history.

His whole way of thinking is very innovative and directed at leaders of the new education. These are leaders who already have an urge to deal with this change since they feel that this is how things should be. I recommend following Michael Eisenberg and deciding for yourself. I know I will keep following him for the simple reason that this attitude must spread — and as quickly as possible. Knowledge is power. 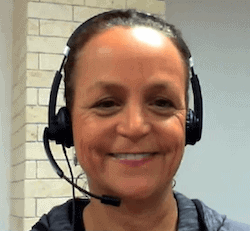 Josia Nakashhttp://www.goodvibeagency.com/
Josia is a consultant to the high-tech industry and loves sharing all the good Israel has to offer the world. She has a BA in International Relations and Political Science and was the IDF's second female sniper instructor.