The Power of Women and True Self Expression

The power of self-expression of thought, opinions, views and ideas for women have never been felt and acknowledged more openly in such a profound way in which we see today, as more women starting to engage their voices around some deep conversations, that is rocking the very core of what is considered to be the norm for us women when it comes to expressing what we really think or feel on a verity of topics. Diverse groups of women are vowing to let their voices be heard throughout society while empowering more women on a global scale, and who are standing up for their rights in a so call male dominating society.

It’s a true  paradigm shift where true gender-equality, appreciation, and respect for women mean so much more for those who have struggled for so long to hold on to their dignity and pride awaiting the day when we could hold our heads up high, and take their place in a society that is learning to acknowledge, respect and appreciate the true strength, meaning and purpose of being a women. For several decades contributions to society by women from around the world have been known, but very few have been widely acknowledged and given credit for their great accomplishments in general, especially African-American’s and women of ethnic origins. However, today the light is beginning to shine much brighter for those who have been forgotten or, intentionally looked over simply because you were women.

Finally, we are now beginning to see a change of attitude. It’s a new day for so many women, who have endured the struggles of indifference, and the harsh realities of an ignorant, prejudice and male-driven egocentric society for too long.

This is truly a wake-up call for America! Although, still a long way to go, the future remains bright.

Finally, we are gaining some ground and well-deserved recognition. Women are beginning to level the playing field when it comes to rising to the top, and positioning themselves on all levels, securing their place in society and providing for their families financially. Women are speaking up and holding others accountable for their actions, towards injustice, and cautioning others to live up to their promises toward changing wrong to right, exclusion, inequality, and injustice in a society can no longer hide from the truth. This is truly a wake-up call for America! Although, still a long way to go, the future remains bright. It’s time for us all to choose to take a stand for what’s right and rise to a level of leadership.

The voices of women can finally be expressed thoroughly, authentically, and unapologetically.

Voice of The Community

It’s a time when the voice of our communities is joining forces to be heard. Sounding an alarming message that’s ringing louder and louder like The #MeToo movement and TimesUp. This is only the beginning. More women are finding their voices in society, which is very enlightening, empowering and liberating when it comes to discovering truth, purpose, and meaning in the things that we desire to learn more about ourselves, people and the world we live in today.

The Power of Self-Expression

I believe that the true power of women is in how we communicate our views, opinions, and ideas. When, and where! When women unite on the same front things happen. This is the real key to women’s power and that’s exactly what we see taking place today. More women are in a position of power and are lifting up one another, and making a huge difference in the world through true leadership, bring the conversations about inequality, bullying, and sexual assault, emotional and physical abuse, along with injustice to the round table. From a completely different perspective.

You see, we’re not so different after all. The majority of us when we think about it can admit that we all have the same human wants, needs and desires when it all balls down to it.

So what does that mean? Well, in my opinion, for me equality means that we have the right as human beings to strive to achieve the best life possible, to provide for our families, and to rise to the highest level of our human capacity of compassion, love, and kindness towards one another, and to achieve hope and healing for the world.  In simple terms, if we could reach this level of truth, and spirituality, growth is possible, individually, and globally. The world would be a better place for us all, and there would be no need to sweat the small stuff. Again, my opinion!

Women seem to be more in control than we may think since, American women control more than $39 trillion, or about 30% of the world’s wealth, reports Nielsen. What are they spending that money on? According to Nielsen’s research, it’s all about conscious consumption. All women, regardless of age or ethnicity prefer to spend their money this way, but multicultural women in particular support companies “that give back to and do no harm to their environment, community, family, and health.” Women have had to endure the long power struggles to move into a position where their voices can be heard without fear of repercussions, and are now rising high on their throne as boss women and taking control, leading the way for others.

It’s an Exciting Time To Be a Women

Each of us has a voice that could contribute something beautiful in the world. When we do away with the fear of being stereotyped, and old beliefs that we deserve to be excluded from the round table, only then will we be able to rise as women to the highest level of our female capacity with compassion, generosity, love, and creativity.

The world is taking notice of what it means to be beautiful, strong, intelligent, fierce, fabulous and female, with dignity and pride, who deserves recognition for all of her accomplishments to her communities, family, and society. She is not afraid to let her voice be heard, and make a difference in the things that really matter. It’s this true self-expression of female power that has the power to change the world.

Let Your Voice Be Heard! 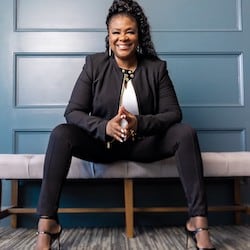 Cassandra Tindalhttps://womenzstraighttalk.net/
Cassandra A. Tindal is the CEO of WOM MEDIA LLC, and Executive Producer of Womenz Straight Talk Television. She is the Editor-in-Chief of Womenz Straight Talk Magazine, whose multimedia enterprise focuses on producing real stories through content that enlightens, inspires, and informs the viewing audience or readers. Cassandra expresses her interest in raising social awareness of today’s global society through media. Through the empowering content and expressed intention to provoke mindful revelations in the human consciousness, reflective of today’s society. She is a co-contributor in the inspiring book  Chaos to Clarity: Sacred Stories of Transformational Change, where she shares her own story of being a cancer survivor, and a certified professional life coach. Cassandra also writes compelling articles for her very own publication, along with a team of editorialist who provides a unique element of media content for the magazine. Articles focus on the stories, views, and opinions of everyday people. Depicted through the colorful spectrum of life’s journey - on a broad range of topics that are quite edgy, relevant, and straight to the point. And what entertains us the most - is widely explored.

The Art of Self-Expression