The Possibility of eRada (Episode 9)

Before her mother had finished, the disc melted on the table … and … was gone, leaving only a small, flat pool of water …

The girl was flabbergasted! Her mother did this?

Perhaps she was no different than most grown children. She never really paid much attention to what her mother was doing all the years of her childhood, then at school, then off to work. Her father worked at the Green Shoe Factory in Boston where Stride Rite shoes were manufactured, ran the stitching department, drove an hour into work and home … she didn’t really know him either.

“Mother, what is going on here,” she said with a twinkle in her eye and a half smile.

Her mother began this way …

When I was a little girl, I never knew my grandparents. My mother told me stories about them and that they were descendants of the Northmen, also known as Vikings. They settled in Kiev Russia where they raised their families.

Grandfather was a Knight and Grandmother was an Earl and they met for the first time on their wedding day. Betrothed at age eleven, they communicated by messenger over the years. Many messages were lost; some showing up years after being sent. It was amazing how their love persisted for decades.

Her mother stopped and said, “wait a minute…”

She got up and climbed a pull-down staircase into the small attic, above the kitchen. The girl poured herself another cup of coffee. She wondered why her mother hadn’t ever talked about her grandparents before. She was also kicking herself for not paying more attention. Looks like mother had a magical and mysterious life.

“Found it,” she heard her mother’s holler float right down ad through the wood in the ceiling. There, in the corner of the attic, covered with dust was a small trunk with splintering wood spines, dried with age, and a leather handle. It was dusty where the blanket covering it had slipped halfway off at some point long ago. 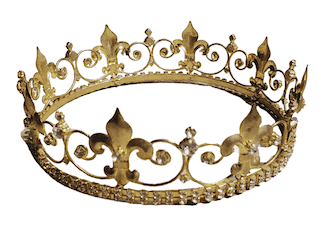 Opening it, she reached in and carefully fingered past several thinning layers of aging raw silk, to reveal a crown. Simple, tarnished, yet it had survived time … over twelve hundred years and was last worn by Lee’s great grandmother when she met her betrothed. As an Earl, she was granted the rights in Kiev as a landowner and therefore a queen-of-sorts. This was her crown!

Lee’s mother began to cry as she realized this ancient relic had been buried in her attic without a care for the whole of the girl’s life and was never shared. “Water under the bridge,” the mother was fond of saying. I’ll make it right, right now. Now is all we have, after all.

She gently lifted the crown from underneath all the layers of silk and carried it like a newborn, down the attic stairs, step by step, and walked to the table. Cradling the small package in one arm, she moved the coffee cups, biscuit plate, and utensils to the side with one hand, then gently lowered the silks onto the table.

“Lee,” her mother said, “Let me tell you a story about my grandparents.” 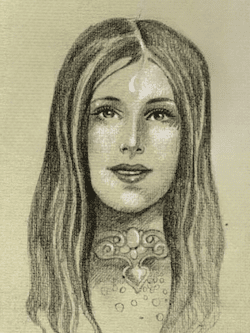 eRada’s female emissary, Jaya-Li (Jaya for short), was the daughter of her mother’s generosity and her father’s sense of unity. She lived with her brother and parents near the upper crust of eRada.  Their home was built into a hill where the beds of magic truffle served as their roof and maintained a gentle coolness within. With four hours of night and three suns, it was the perfect scenario for inhabitants.

The openings to the outside of the hill were three small windows and a door. Other than those four places a passerby would never realize there was a home there if they didn’t notice the openings.

Inside in the far-right corner as one enters, sits a very large white stone fireplace, with an opening for wood log storage. The fireplace was six feet in diameter with a wrought iron arm from one side to the other for hanging pots of stock, brother, and hot water for cooking and to keep the main room warm.

Next to the fireplace in the back of the room was a small pantry and next to that was an open cabinet where the family dishes were kept. Across from the fireplace was a single bed offered to the occasional traveler, and a narrow staircase leading to an upstairs, further inside the hill. The upstairs had one room with two large beds for the family.

The table and four chairs sat in the center of the large room and there were two ladder-backed chairs, handmade by Jaya’s father, and a small woven rug. The floor was laid with wide, long planks of cedar, which grew naturally on eRada and had their home always fragrant of cedar and warm smoke, as it was absorbed into the wood.

Her mother had a modest garden about fifty feet away from the house, filled with flowers, fruits, and vegetables that adored and thrived under long, long days of warm sun. She cultivated year-round oranges and a berry something like a strawberry as the girl knew it, along with corn, spinach, and tomatoes.

Hunting for game on eRada was restricted and organized to give each family ample food all year round. There are vast forests in addition to the truffle beds, and the environmental balance was overseen by eRada’s chosen male emissary, Stuvan. You’ll meet Stuvan in another episode.

Jaya’s brother, Aadi, was half her age when a great turbulence occurred within the center of eRada, causing critical weather implications. The livelihood of eRada depended on the consistent nature of their climate. Any disturbance could affect the crops and thereby their livelihood. And above all, the distribution of magic truffles in every corner of the known world, which was their primary focus.

The disturbance happened one late afternoon when Jaya had finished her work for the day. That included going with mother to the fountain for their daily spiritual walk, prayer, and retrieval of ‘water,’ tending to mother’s garden, several hours within eRada, schoolwork with the master, and working in packaging or sorting magic truffles.

She often wandered to her favorite stream and cuddled into the thick and lush green moss that grew along both sides of the stream … and napped.

While sleeping, a storm began, blowing monstrous winds from within the planet, through the tunnels, and to the surface. The winds were so strong that Jaya was rolled down the small hill and right into the stream and was quickly swept away by the now rushing aqua discs. She knew she could not reach the shore while being pushed downstream at this rate, so she lay back and did the only thing she could do … ride it until it ended. For surely it would end, she thought. Surely it would end.

Episode 10 will reveal the mystery of the crown, more on how that one disc ended up on the path to Lee’s mother’s cottage.

What happens during Jaya’s furious ride down the blowing aqua discs in the stream?

Beware of the Creeping Dream Killer

Gut and Intuition are Different