She awoke to sunlight streaming in through the stained-glass window in her bedroom. The turret was round, and the windows were small, decorated with gardenias, the girl’s favorite, as is her mother’s. Somehow, she imagined getting a light whiff of gardenia when she focused her gaze on the blooms in the window.

ENJOY ALL PRIOR EPISODES BELOW↴

The Possibility of eRada (Episode 7)

Today the girl was going to finally talk to her mother about the disc she found … and how she met Van not long ago and how he disappeared. Her mother would likely have ideas about this. In any event, she needed someone to talk to.

Right now, she spent so much time at work … and she had no interest in talking about her life with the owner of Janeslee & Sylvain Handmade Chocolates.

She grabbed her purse, a sandwich for lunch, and her Pendleton, and bounded down the back stairs, heading to her mother’s cottage. The sun had been breaking through the fog, which didn’t happen at 8:00 am typically and it shed dancing light along the pine needle path. She loved living here in such a beautiful place and close to her mother.

As the door to the cottage opened, the waft of fresh coffee filled the air … mother smiled, hugged the girl, and invited her to have a seat at the small kitchen table, which overlooked her mother’s garden, filled of course with the last blooms of her gardenias for the season.

Oooh, mother had made fresh biscuits this morning, riddled with sharp cheddar cheese. She knew her daughter loved these. Coffee poured, cream added, biscuits buttered, and mother sat down at the table.

“Mother,” the girl said, “I’ve been wanting to show you something.” She reached in her pocket, took out the disc, and laid it on the table by her mother’s coffee cup.

“I found this by chance on the path coming here about a week ago. Do you know what it is?”

Her mother touched the disc ever so lightly with her forefinger, then looked up at her daughter thoughtfully, as though she was getting ready to say something. She paused.

“What?” the girl asked impatiently. “What?”

“Do you know what it is mother? When I touch it, my fingers are wet, and something so strange happened. When I first found the disc, I sneezed and by the time I got to your porch, the flowers appeared to explode in color.”

“What is it? How did it get here?” She kept firing questions at her mother, one after the other.

Her mother smiled and leaned back in the ladder-back chair that had been in their family since she was a little girl, now rubbed with age where the chair back met the table edge, looked up and said with another smile and a wink, and said, “watch this.”

As her mother began to whisper these words aloud, almost like a song, she took the girl’s forefinger and her own and placed both tips directly on the disc.

Hail to the Spirits that guide us, day in and day out,
We offer our gratitude and ever-present love,
For your protection of our peace and harmony,
Knowing you are watching us from above.
Our greatest good is what we wish for one another,
The gift you give to every father, child, and mother.
Behold the miracle of eRada, your gift to us,
To live where all are one, Hail to the Spirits that guide us.

Before her mother had finished, the disc melted on the table … and … was gone, left by a small pool of water.

Once truffle harvesting was in full swing on eRada, which included a lot of hard work setting up the underground processing and packaging for distributing the magic truffles through the galaxy, it was time to select the emissaries from eRada. The emissaries were one male and one female with an extraordinary propensity to living their virtues.

Many offspring of the original spirits now had their own children, and all the children of that generation considered it to be an honor to be selected emissaries to the world. All good deeds done by offspring were recorded in the family journal and these acts were part of the process of selecting the emissaries from eRada to bring their magic truffles to the world.

In fact, for the first judging, both Freya and Odin from the old Norse god collective were invited to participate in the judging. These Norse gods had much experience in determining the highest quality of value in their own countrymen.

And so it was that a daughter of mother’s Generosity and father’s Unity, and a son of mother Justice and father Courage were selected. They came from a long line of highly visible and generous spirits and were well known by fellow eRadans.

These two met as did all the children, when they were toddlers in a nursery commune, where they were carefully watched over during the harvesting and manufacturing, and distribution days, deep within the planet.

Each day an ‘old soul’ would travel to the commune and teach the children the history of eRada, the origin of their values, spirituality, geography (in case they became emissaries), and about the values of all the gods of the world. They spent their days listening, playing games, laughing, and napping at the knee of the old soul. Life was free and easy for them, just as life was in most cases for inhabitants of eRada.

All the children on eRada were like brothers and sisters, each exemplifying the virtue of their parents, and of course their grandparents before them. Each generation of eRadans became more focused on exhibiting and sharing their virtues through their deeds. 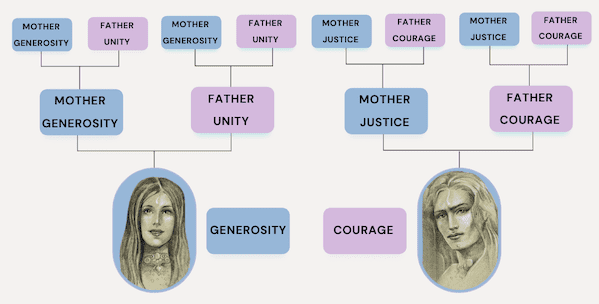 The emissaries managed the world distribution of the magic truffles, returning home each year with supplies and tools from other worlds, that rounded out life on eRada. They came back with foods, spices, and herbs … and stories told to the children in faraway places.

While not mentioned before, there exists a negative force within eRada which will be revealed in a later episode. You will learn of the Spirit Demons, who constantly hover and flit over and around the mountains, sucking up the tender plant life that keeps eRada in environmental balance, also small wildlife, and the precious truffles when the wildlife wasn’t enough to appease their hunger.

They seemed to prefer the truffles filled with blueberry, although they also made a huge dent in the raspberry ones. Packaging results revealed this daily ‘loss’ of those truffles. Spirit Demons travel the planet via the intertwining wind tunnels, that forced the course of discs in the water beds.

Episode 9 will begin to reveal the lineage of the girl and her mother.

You will learn the Story of the selected female emissary.

Gut and Intuition are Different