The Possibility of eRada (Episode 6)

I didn’t see the Girl for the next few days as I was teaching during her work breaks when we could meet. I kept looking at the map I drew and finding more and more questions for which I wanted answers.

ENJOY ALL PRIOR EPISODES BELOW⤵︎

The Possibility of eRada (Episode 5)

The next day the Girl skipped her work break so she could slip out early and stop at the nursery before catching the bus home. She was going to see Van again. She felt herself skipping as she left the chocolate shoppe.

Each day that week she brought him a truffle from that day’s batch for him to sample. What she didn’t know (and never would) was that Van was just as excited to see her at the end of his day, as she was to see him. I bet she would have loved to know that.

There he stood among the lush and fragrant small cedar trees in the nursery, flashing his broad, toothy smile. “Why did she find the gap between his two front teeth endearing,” she thought to herself? She could not remember ever meeting anyone that had the same kind of gap, except a boy in her class in middle school who had it corrected with braces.

Walking toward him that day felt magical, which she shared with me ‘why magical’ at a later meeting. His grey-green eyes sparkled, and she could see the copper and gold flecks in his iris, and the soft and thick, bronze lashes framing them.

By the third day that week, as she made her way to the nursery, she literally felt like she was ‘gliding’ toward his now outstretch arms. Enfolded in his brief embrace she notice she felt a warm glow as she stepped back, and they began talking. It was amazing she told me how much they could talk about in fifteen minutes.

“What’s the flavor today,” he asked on that third day.

“Raspberry! I almost forgot!” she said as she reached into the vest pocket of her Pendleton. She almost forgot to grab one, remembered, and dropped the sample in her pocket as she walked out the door.

As her fingertips felt the slippery chocolate shell, she felt something else in her pocket, underneath the chocolate. Oh, yes, she remembered. The disc! The last time she touched it was after a shower several days before.

Fifteen minutes later he watched her turn and head out of the nursery and down the sidewalk toward her bus stop.

He found her captivating and beautiful. Their conversations were light yet everything she said … every word she spoke … felt intense to him. Every word was important to hear and absorb.

Today was the first time he finally opened his arms up to her as she approached, and it felt wonderful! It was not sexual … he knew that feeling for sure. This was different.

“How kind she is,” he thought, “to bring me truffle samples and listen attentively as I pontificate the pleasures of taking the truffle whole into my mouth, sucking it a few times to release the outer chocolate goodness, then closing my mouth, allowing my gums (not teeth) to crush it, releasing the raspberry flavor in a gush, then gliding down my throat.”

“She listened to me,” he thought. As Van thought back over his last two relationships, he couldn’t ever remember a girlfriend listening to him this closely and kindly.

As he fell asleep that night, her face was the last image on the screen of his mind.

As the Girl fell asleep that night, it was his face she saw as the last image on the screen of her mind.

Life on eRada included the upper, middle, and ground elevations … and below ground of this oddly shaped planet, with three suns and four hours of night based on its odd climate.

The Divine Spirits and their families live in the upper elevations, where truffles are harvested daily and grow in winding moss beds around the mountains. (Graphic renderings of eRada shown in Episodes 3 and 4.)

The female Divine Spirits are blessed with a placket of skin along their middle spine which can open, under specific circumstances, revealing a large set of wings. It is not unusual to see a female transporting her male across the lands to study with the Old Souls. 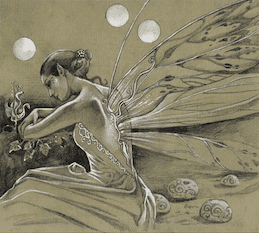 The Divine Souls, better known as the ‘Old Souls’ live in the middle elevations in caverns that run near the surface of the planet. Old Souls have undergone a spiritual transformation into another form and are where the male Divine Spirits study and learn about the world of spirituality and virtues. It is also not unusual to see a female after transporting her male partner by wing, at the knee of her male, as he has long spiritual conversations that often exceed the four hours of night.

Below ground is where the truffle harvesting occurred every day. The temperature was cool and dry there; the perfect setting for keeping the truffles fresh for packaging and transport. With three suns and only four hours of night, when left unharvested, the truffles melted back into the soil within five days of blooming.

The ground elevations were made up of small lakes, rivers, streams, and plenty of wildlife. Water, however, is not like the water the Girl, or you and I know. It looks like water from a distance. Yet, as the Girl hovered over the river getting closer, she saw that it wasn’t water at all in the river! The river and all water beds were filled with zillions of clear glass discs that were constantly flowing, like water.

There were the discs!!

A lucid dreamer she realized in her dream that she had a disc from eRada!!!


How did a disc end up on the path to her mother’s cottage?

How did inhabitants get water, if all there was in the rivers, streams, and lakes were flowing discs?

How did the discs move continuously as though they were water?

These are questions to be answered in the next and upcoming Episodes.

The Possibility of eRada (Episode 4)