The Possibility of eRada (Episode 3)

The girl awoke the next morning to the sound of thunder. Her dreamed slipped away as her thoughts turned to getting ready for work. She was learning to temper chocolate this week. Tempering causes the crystals to be small and consistent to create the best, smoothest and most tasty chocolate. The shoppe ordered only the best product from Belgium, along with natural flower essences. Each truffle was rolled by hand and the girl was learning that technique too.

Another long day, when she got home, she hopped in the shower.

She forgot to bring her robe into the bathroom, so she grabbed the nearest thing to put on … the Pendleton was close by, hanging on the same chair since she left it there since the day she found the glass disc.

She loved Pendletons. These were her dad’s; he had given her his prized collection of six. They were wool and a little itchy, yet so warm and colorful. They smelled like her dad too; always comforting.

They were also perfect for the weather when worn as a jacket. When it got warm in the afternoons, she tied the arms of the shirt around her waist. Worked perfectly for the cool, foggy mornings that turned into sunny afternoons particularly during ‘Indian Summer’ in the fall. That was the warmest time in the City.

She felt something in the shirt pocket. Oh! It was that odd disc she found on the way to her mother’s. She took it out of the pocket and realized it got wet when she touched it. In the next second she squeezed her nostrils together with the fingers on her right hand (like when she inhaled pepper) and when she did, she quickly took an involuntary, sharp breath in through her nose, and saw, what she remembers as ‘seeing stars,’ and then coughed twice. She had a light dinner which tasted extra good and went to bed.

She was dreaming again, in a deep, warm and soft slumber.

Right back to tracking where that sunvirate had gone. It disappeared and while the game continued among the immense astrological signs, lumbering around the heavens, unaware of their size, with a new one, the girl focused on its landing point.

She saw it! She saw sparkles intermittently from quite a distance. As she ‘leaned’ across the sky to get closer to it, it had lodged in an odd, elliptical-shaped planet. Damaged, it sparked only now and then.

At first glance, the tiny planet had two suns and in what seemed an instant, as if by magic, the sunvirate loosened, shot upward, and took its place as the third sun of the planet!

Unfortunately, the damage disallowed this sun to rotate with the other two; it remained constant in the sky. The dance of the two rotating suns, anchored by a constant one, created climate and day and night on the planet. 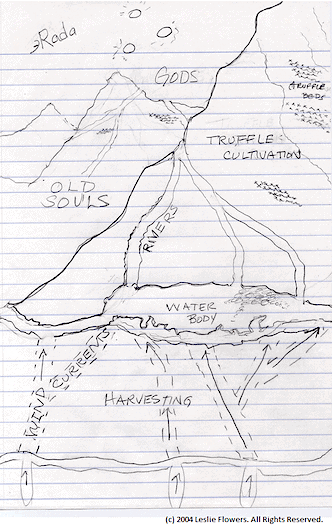 “eRada,” she mumbled, and she turned over, punched her pillow down, buried her head in deeper, and drifted away again.

As the girl continued telling me her story, I had met her during her break at the chocolate shoppe. And I drew this map of eRada on the back of a brown paper band that held stacks of napkins together when they came back from the cleaners.

I worked quickly as she explained all the features on this odd, shaped planet. I was fascinated.

She started with the three suns at the top and how one of them was the sunvirate from the game she watched the night before.

She explained how the sunvirate became the third sun maintaining day, night, and climate. How would that work I wondered as she talked away, lost in the exquisite description she was sharing with me.

Her break was over, and she invited me the next day, to continue telling me more.

Now you know the sunvirate became the third sun, giving ‘life’ to this odd-shaped planet.

While the disc shows up again, its purpose will be revealed soon.

In Episode 4 I learned all about the unique climate and topography on eRada, amazing on its own.

I am the imaginary cartographer.