The Possibility of eRada (Episode 12)

It was late when Lee got home that night; it had been a long day at work. She took out a burrito from the freezer and nuked it, poured a large glass of water, and headed upstairs.

The moon in her bedroom cast a bright light, flooding through the stained-glass window, casting magical shadows from tree limbs, gently waving in the night breeze.

She undressed and sat mindlessly eating her burrito, looking out the window onto the rolling landscape and could see the roof of her mother’s cottage from there.

After dinner, she crawled into bed, never noticing that the crown mother had shown her yesterday, sat on a chair in a dark corner of her room.

Snuggled in, she smiled and welcomed sleep, which came right away.

Then she thought she felt something touching her head … she knew she was asleep. Then she felt a strong arm, wrapping around her waist, and was lifted out of her bed.

She woke with a start! Van was standing in her bedroom!! It was his arm wrapped around her waist!

He adjusted the crown he had placed on her head, pulled her even tighter, kissed her full lips hungrily and deeply and said, “Hold on, I’ve got something to show you.”

“What? Wait,” she said, still flushed from the rush of his kiss! “How are you here? Where have you been?” She had so many questions.

Van lifted her into his arms, touched her crown, and they both floated eerily up and through the turret roof as though it wasn’t there, and out into the moonlit night sky. 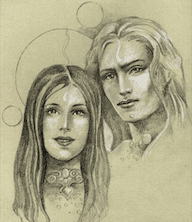 It was night on eRada when Van and Lee floated from the dark sky down into the atmosphere of eRada and landed gently in the middle of a wild truffle bed.

“Where are we,” Lee asked, feeling a little dizzy.

When she looked up at him, she was in shock! He did not look like ‘her Van,’ the Van she met at the nursery … not exactly. It was him … but he looked middle aged now! “Oh my God,” she thought to herself. “What’s going on here?”

Van laughed when he saw the look on her face. “Lee,” he said, “you look older too! And so beautiful.”

She felt her face with her fingertips, then around her eyes and her mouth. It was different; older, sagging?

“Where are we,” she asked him again.

It had taken forty years of travel, he explained, from the moment we left your  bedroom in San Francisco to arrive here, on eRada. While it felt to Lee like it was a few moments, she had lost all sense of time.

“I want you to meet two very special people tomorrow,” he told her. “They are our younger selves.”

“Huh? This is all too much, Van. You mean there are two versions of us,” she asked.

“Yes. We are forty years older than they are! So, we get to see and get to know our younger selves!”

“Tomorrow,” he said, “You will meet Jaya-Li and Stuvan; you and me.” He smiled looking down into her eyes and brushed her cheek with the back of his hand.

It was night and the three moons were shining brightly over eRada during its daily, four-hour stretch.

Van adjusted her crown again, pulled her very close, and kissed her gently for a long, long time. With arms wrapped tightly around one another, gazing up at the moons, they nestled down into the soft truffle bed and fell into a deep sleep.

As they slept, dreaming about tomorrow, the dreams were warm and filled with these sounds, seeming to emanate all around them.

THIS ENDS PART I