It was a week or so before I was able to meet with Lee again. I met her at the coffee shop over her lunch hour. I couldn’t wait to find out if anything was new since we last met …. probably not. I was interested in seeing if she was still having that dream.

I got there first and took a seat at the window looking out on the dead-end alley, just off a busy street between Chinatown and Nob-Hill. It was narrow and on one side was a long, blank warehouse wall with minimal redesign. Now there were several dwellings, each with entry into the alley and with a window.

At the end was a tall narrow building of flats, where five escape ladders built a stairway to the sky. Behind each ladder, there were identical windows … a big one in the middle and two smaller ones on either side.

I saw several children squatting on the curb across the way, making signs of cardboard box flaps. Two got up and began batting a racquetball against the door of one home. The door opened and they were greeted by a lurching and barking old German Shepherd, followed by a woman who pulled the dog back in, smiled at the children, and closed the door.

In bounded Lee wearing a Pendleton over her full-frontal apron, covered with chocolate and some green and pink food coloring of some sort. I smelled raspberries!

“Do I smell raspberry,” I asked her. She laughed shaking her head and pretending to wipe her apron and lick her fingers smiling. “My favorite,” she said.

“So …has anything happened since we met last week?” I wanted to hear more about her dream.

Before I knew it Lee began talking about Van, who she met the week before at the nursery on the way home, and how he disappeared! She described him as tall, with copper hair and a small separation between his two front teeth.  She talked about their simple hugs that felt so comforting and warm. And then she began to cry.

“What do you mean, he disappeared,” I asked.  “And why are you crying? You only knew him briefly, right?”

“After two brief visits on my way home, one day when I went by the nursery, and I couldn’t find him anywhere! When I found the owner and asked him about it, he insisted no one named Van worked there!”

“Do you think it’s possible that I never met him? And this was part of those very strange dreams,” she asked.

[From Episode Ten] Finally, after three days of turbulence, the winds subsided, and she walked, wobbly-legged to the shore. Now for the long walk back to her home. Oh, she was so hungry and could almost smell the rabbit stew mother always seemed to have simmering over the hearth.

You may be wondering Why Jaya-Li didn’t simply ‘release and open her wings’ to get home, rather than walk. The use of wings is restricted to first, any emergency that required fast transport, and second, transporting the males to the knee of the Old Souls where they study every day. 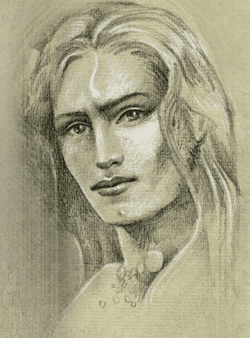 with Jaya-Lee and is the son of mother’s generosity and her father’s sense of unity. His father had been managing the delicate environmental balance on eRada since its inception.  Stuvan now has this role and protects the forests and all living things on the planet, along with the truffle bed harvest, planting, and maintenance.

Stuvan’s biggest challenge Spirit Demons who constantly hovered over the mountain, sucking up plants, creatures, and truffles, when they were hungry.

As a youth, Stuvan developed a solution to the hungry Spirit Demons. His system provided consistent nourishment for them so that the mountain range ecology remained pristine.

Each day he gathered up the bits of tree and flower that were naturally sluffed off and placed the great pile of offering in the center of a large meadow. As the Spirit Demons were attracted to fire, Stuvan would create a small narrow lane around the pile of nourishment and set it on fire. The fire self-extinguished swiftly, yet after the Spirit Demons made a beeline to the feast.  Much more efficient than foraging.

Unfortunately for managing the ecosystem on eRada, Spirit Demons and Old Souls (teachers) had altercations frequently. They both use the wind tunnels that fuel the water beds to reach the surface of eRada.

It took all of Stuvan’s mental prowess to manage the Spirit Demons and the Old Souls, in addition to his environmental responsibilities on eRada.

He has his own Spiritual Guide of sorts in Lalla. Many creatures live on eRada, but none to compare with what we might call a bear, whose telepathic powers are greater than any spirits on eRada.

As Stuvan grew and learned how to protect the forests at his father’s side, Lalla offered great insights into preserving ecological and planet balance so that the finest truffles would spring up through the heavy moss beds that covered the forest floor, and peace would be enjoyed among all spirits.

Lalla can foresee what might happen when certain solutions are available to manage the environment or a skirmish between the ‘souls,’ and image them in real time for Stuvan to follow. At these fortuitous moments, Lalla will lie face down on the moss and in between truffle beds, with legs and arms splayed, and hum a certain group of notes, three times in a row.

Then, just above the Lalla, appears a hologram of events playing out like our newsreels. She might offer several solutions in a few minutes, depending on the challenge. Stuvan would then study them and choose which avenue to follow based on this vision. Lalla served as a second sight or additional layer of intuition for Stuvan.

Although Lalla is five feet on all fours, her paws have two extra digits at each heel, allowing him to gather great speed in his lumbering trot. When running at full clip, it took Stuvan from boyhood into manhood to keep stride with his beloved Lalla.

While growing up, these two spent countless hours frolicking in the waterbeds on the mountain, sun shining in their faces, both spirit, and guide like siblings.

When harvesting season was through, they would stuff themselves with the truffles that grew around the very edges of the field. These edges were left for those who required their passion and spirituality and succulent flavor. The spirits had heard about this effort when former emissaries came to earth and stumbled on the most popular book on that planet, what they call the New Testament.

Episode 12 The girl needles her mother for more information about her past. Van shows up unexpectedly. Listen for strange music!!

The Possibility of eRada (Episode 5)