The Possibility of eRada (Episode 4)

I couldn’t wait to hear more about eRada. We made plans for the next day to meet again on her break.

ENJOY ALL PRIOR EPISODES BELOW ⤵︎

The Possibility of eRada (Episode 3)

The girl walked through town toward home every day after work to catch her bus. She passed the bookstore, the hardware store, and then the nursery on the corner. These small shoppes where a comfort as they were the ones that stood since the 1950s with some embellishment and upkeep. It was cozy. It was comforting; a great way to wind down her day and get lost in her thoughts.

Just now, though, her thoughts were interrupted as she passed the nursery … a bronze flash of light in the dusk caught her eye … coming from somewhere amidst plants and shrubs. Still walking she turned her head to look back into the nursery.

When she saw it again, she stopped, turned, and stepped into the front of the nursery. In the back, behind a cluster of shrubs, she saw the light flicker again. It was the quick glint of a floodlight in the dusk, bouncing off the shoulder-length, coppery hair of a tall, slim young man working there. He looked up.

She turned and walked toward him smiling. She had never seen him before yet was somehow compelled to approach and to speak to him.

His name was Van, he told her, and had started that day as an intern for the nursery as he was working on a degree in agriculture at the local university. He laughed a moment … then reached over to wipe off a glob of dried chocolate on her sleeve. “Tell me you work at the chocolate shoppe,” he said smiling. She shook her head ‘yes.’ 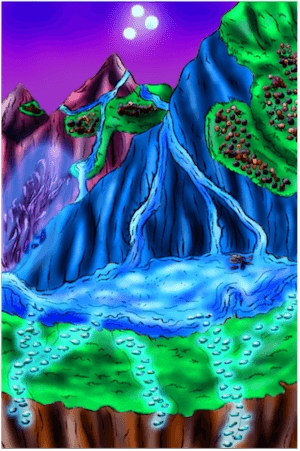 With thoughts of how she met her new friend Van on her mind coupled with another particularly exhausting day, it was only moments after a quick bite to eat, that the girl flopped onto her bed in her turreted alcove, and fell into a deep sleep

As she dreamed again of eRada, she was able to maneuver herself far above, and all around the planet, which was quite beautiful. The temperature was steady at 65◦F; no change (not so different than San Francisco she thought inside her dream).

The odd shape allowed only four hours of night of each twenty-four and with the constant temperature, glorious wild truffles erupted naturally through all the moss beds in the mountains. Each truffle was infused with and exemplifying one particular virtue.

The truffles were cultivated and harvested by the population along the mountainsides in the upper elevations of eRada. They were then packaged for shipment within eRada, far below the surface.

At the closing of each day, a basket of eRada’s wild truffles were offered by the people to the ‘Beloved One,’ with thanks for the gift of life in this beautiful place and their daily labor of love. The offering took place in the small village square near the fountain in the town center. One representative of each family on eRada was there each day to give thanks.

The truffles served as barter for goods required to sustain the population.   After the offering each member slowly crushed one plump truffle in their mouth where the taste oozed into a caramel-like liquid gold, as it slipped down the palate. Liquid gold releasing the exact DNA of that virtue into every cell in the family member’s body. Because the offering and consumption occurs daily, each inhabitant on eRada was fully expressed with many, many virtues and robust health.

I was hoping when we met again the next day, she would explain more about the unique topography and who lives on eRada.

Do you think her new friend Van fits into the picture?

You were ‘this close’ to the mystery of the disc in this episode!