The Poet & the Peddler, What Poetry Can Teach Us About an Audience

What does the poet know that the content writer doesn’t? This question is really a conversation with myself. It’s happening in my head, but maybe you can relate?

Part of me is a poet and part of me peddles products as a copy/content writer. These two competing identities usually don’t communicate. But, today, the poet in me has something to say to the peddler in me. Maybe it will resonate with all the other peddler-types out there masquerading as copywriters and content producers, or anyone else really who longs for an audience.

First, let me back up and tell you a little more about these two identities, and what it’s like for them to inhabit the same geography. The peddler makes more money, I probably don’t have to tell you that. And the poet has an air of both superiority and self-doubt, that last part coming from years of being ignored, dismissed, undervalued, and misunderstood.

I usually keep these separate selves pretty well compartmentalized. They like to pretend that the other doesn’t exist, though secretly the poet envies the peddler’s paycheck, and how she’s in demand. And, conversely, the peddler envies the poet for being able to take her time, to ponder the profound.

The peddler is obsessed with the sale, of getting rid of all her wares. The peddler is seduced by impressions, clicks, likes, and shares — mistakes them for variable proof of worth. The peddler is a hustler, an attention-getter. I often have to remind her to settle down, to step back, read it again, and again, and then read it aloud. I don’t have to remind the poet of that. The poet knows, the redemption is in the revision, the silence, how the words sound as they move from page to atmosphere.

These two parts of myself behave very differently. They feel like separate selves — to the point that I’ve often wondered if I meet the qualifications for DID in the DSM-5. DID is Disassociative Identity Disorder for those of you who may not have spent your twenties and thirties in a therapist’s office racking up diagnoses that never quite explain why you’re so weird and unfulfilled.

The Poet’s Deep Need for Love

Most mornings, the poet demands a breakfast of poems. Her desire is insatiable. This is when she feels most loved. It’s an intimate ritual. The poet in me is, first and foremost, a reader of other people’s poetry. She likes to play the role of the submissive, if you will, giving over all her time and attention to another. She can feel the adoration of other poets as she sits quietly with their words, taking them in. She can feel the enormous respect they have for her as the reader, their devotion to sharing wisdom, secrets, and liminal states of being.

Over the years, I have been entangled in plenty of intimate exchanges between poet and reader. I’ve imagined myself the object of affection for the likes of Louise Glück, Elizabeth Bishop, Jenny Xie, Matthew Zapruder, Miller Williams, Ted Kooser, Deborah Garrison, Tess Gallagher, and on and on.

The number of affairs I’ve had, the many lovers I’ve taken from the world of poetry, would make the most experienced courtesan blush.

The relationships I’ve had with poets have been so formative, I believe they may haunt my final hours. When I draw my last breath, I imagine seeing “two roads diverged in a yellow wood.” Robert Frost’s well-known poem was the first to shake me loose from habituation. And, it did it with a whisper that sounded something like this: “You, yes you, pay close attention, learn this by heart, remember it always, I have thought long and hard about where you are, I have studied your sacred being, and I have put this down for you because you and I are the same, we are humans, and I can not help but love you.” Frost’s poem is evidence of how much the poet loves me —the unfamiliar reader. He has examined me most intimately and recognized his own reflection, and this utter mystery delights him.

The Integration of Both

Your first duty is to love your reader. Love your audience, the way you’ve always wanted to love yourself — with utter abandon.

If I, as the poet, were to have one of those master classes everyone is so fond of these days, about how to influence, seduce, and make your audience adore you and do something they wouldn’t ordinarily, I’d say take your cues from the likes of poetry. Learn that your first duty is not to love your message, your intention, your muse,  or even words and language, though that last bit helps. Your first duty is to love your reader. Love your audience, the way you’ve always wanted to love yourself — with utter abandon. Make them feel whole, not separate, or lacking. Surprise them with understanding, appreciation, adoration, and respect. Your audience is smarter than you think. They’re onto you already, so you might as well do what you can to create a memorable, visceral, and surprising experience.

Your job is to shift attention, not to manipulate or steal it — there is a difference! You are the soft knock on the door of desire. Your words are the subtle whisper they can’t ignore. Your job is to enter them like a poem and transform them for the better. It is not to tear them down in fear, to festinate their actions, to shake their coin-purse loose. Your job is to see them, think about them, fall in love with them, know them the way you long to know yourself. Recognize this first, and then you have permission to move the sale.

Let me let a poet put it to you straight. The poem below is a sublime example of how a poet thinks about his reader. It shows the obsessive devotion to the audience, despite their flaws or shortcomings. This is the poem “Reader” by Billy Collins.

that is me rushing to the window
to see if it’s you passing under the shade trees
with a baby carriage or a dog on a leash,
me picking up the phone
to imagine your unimaginable number,
me standing by a map of the world
wondering where you are—
alone on a bench in a train station
or falling asleep, the book sliding to the floor.

Putting it Into Action

Do you see the symbiotic thread in this poem— the need for one another? The reader and the writer have a co-dependency Carl Jung wouldn’t bother healing. They are yoked. So, before you tip-tap your way forward on a keyboard or take up the leaking pen, sit and conjure the image of who you’re writing for. Find yourself in them. Make a pack like a physician to do no harm. Then lay your love on them like Balm of Gilead, not because you want something, but because you’d want them to do the same if the positions were reversed.

If you can be of service to the reader or solve a problem, that is grand and noble, do not diminish it with formula or strip it of importance. But don’t make it heavy either, or glaring, or something urgent. Be gentle and kind the way you’d be with the toddler version of yourself. Do not yell unless they’re in danger of burning themselves, and, even then, resist that temptation to be the center of attention. Instead, simply move their hand away from the stove, look into their eyes, and say, “I got you, you’re going to be okay.”

No matter if you’re a poet or a peddler, you know how to do what you need to do already. You know how to speak to another so that they hear the humanity— so that they feel recognized, healed, caressed, and gently prompted to follow the sounds of their heartbeat and breath. You, yes, you, actually know how to make someone fall to their knees and say, “Thank God, you sent me that email!” All you have to do is recognize the poet in you, who longs to practice the sacred privilege of connection. 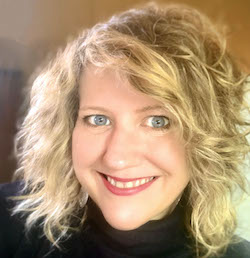 Robin Bennetthttps://www.11centsdigital.com/
Robin A. Bennett is a freelance writer and B2B business strategist. She serves industry and new world creative agencies, including Eleven Cents Digital. She is on a mission to elevate humanity and bring art back to commerce. She believes in the sacred word of poets and that nuance, metaphor, observations, and reflections can shift the human heart and bring awareness and attention back to what matters, our oneness. Professionally, she provides highly original, feel-good copy, and big-picture strategies for consultative sales organizations. Personally, she’s committed to helping people regain their sovereignty and find ways to remain human in an increasingly digital matrix. She believes that we need to protect our attention the same way we do our mental, emotional, and physical health.

What If: A Prompt for Your Forgotten Self, Inner Poet, or...

When Good Enough Is Enough