It’s winter and cold outside. She is sitting next to the window, with a blanket, looking outside to the snow out of the sky, in her hands a warm glass of Gluhwein. When it snows, she sometimes goes outside in the garden, to catch the “white pearls”, the snow has some kind of magic. Then she looks up to the sky and smiles as the snowflakes touch her face. While looking up she always notices the silence in the air, it has so much grace in it that she feels humble.

Today she is just looking outside, enjoying the warm Gluhwein, she smiles looking at the lighted candles, and feels peace in her heart.

Her mind wanders off, she keeps smiling, because in a couple of days it will be 31 December, today it is the 27th of December. That’s the day they met for the first time, almost 44 years ago. Every time she thinks about their love story, or him a smile comes to her face. But she also knows that every time when he hears her name or thinks of her, his face gets very soft, he gets a twinkle in his eye and a smile on his face. Even after 44 years, their love for each other didn’t change. Nor have they figured out if their love story was meant to be or not, as it isn’t an ordinary love story. But you must have figured out, that after 44 years this is a true love story.

When they met 44 years ago, he was studying at the university and she was in High School. They would be spending new year’s eve with a gathering of friends, at her friend’s house. She was new to this group of friends, everyone else knew each other. Then he came in, it was a special introduction. It had not escaped anyone that something special was emerging, the handshake lasted just a little too long. All evening, everyone noticed the spark between these two people, and how they complemented each other on so many levels. It was like they knew each other their whole life.

The whole evening was full of magic, especially at midnight when the new year started with loud cheers and toast, enchanting fireworks, hugs with appropriate kisses. Then she saw the intense kiss between her friend and him, she immediately woke up from her dream. She was confused looking at the reality of life. How could this be, had she imagined all evening, was her intuition misleading her? No, impossible. She was one of the first to leave that evening, she did not understand the disappointment on his face, but most of all the pain in her heart.

In the coming months, he was always on her mind, but she did the right thing and stayed away. The group of friends decided to reunite at the end of the summer holidays and she too was invited. The friendship with her friend was above all, no man would come in between. And so they met again after seven months, it was great to see him again, everything was just as special as that one night. Even though there were a lot of vibes going back and forth between them, without a word there was something so special going on between them. This time the goodbye was much harder and more painful. Everyone went their own way again. And yet something was not right.

A few months later when the doorbell rang he was standing in front of her with a bottle of wine. Time for a chat! Thinking back to that moment made her laugh, too, how much courage it had taken to do so! Feelings were shared and admitted, but she remained loyal to her friend in her friendship. The next day when he left his face was full of disappointment, which he had hoped for, she had said nothing about it. Her feeling said that something was really wrong. After a few months, she heard that he was getting married, no not with her friend, with someone else! She was furious. She wondered what her sacrifice was worth now? She also knew that this marriage had to do with his visit.

Moment of truth! Time for a reality check, if her friend would not be in the picture, would she be ready for a commitment with him? The whole world was like: you fall in love and get married! But this was not going well with her. Everything was there, the soulmate connection, the whole bonding between two hearts, the loving and caring. So many different forms of love, which one was this? Her answer came when months later he visited her again.

As in every love story, there always is a good fight, she was ready to give him a piece of her mind! She opened the front door looking like a tornado in human form. Yelling at him “what on earth made you marrying her?” within seconds he showed her a picture “Oh no..” which he answered with a smile “Yes and she also has the same name as you”. She was staring at herself in this picture, the woman in the picture was a look-a-like of hers! Again thinking about that moment in the past made her laugh so loud.

Both shared whatever there was in their hearts, which made them aware that this soul connection for sure was from some other level. Before he left he said two things: “You were the first and will not only be the last but forever! Whatever happens in between, will never be about our love for each other. Our love is forever” As he drove away, he texted her: “I divorced her”.

Now 44 years later, although they don’t live together, this love was just meant to be! She just can not wait to see him. In a couple of days, again they will meet on new years eve, like the past 44 years. Nobody knows where they go, they just disappear to celebrate their love…

This is a true love story, they both are still friends with the same group of 44 years ago. Their love is still going strong, so there is not a happy end but a happy forever. 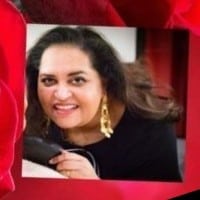 Ineke Kanhai
I believe in and guide you to Be your own Excellence. We rise by lifting others Up! My personal Brand: #BeYourOwnExcellence. My main focus areas are being an/a Online Coach, guiding you to Be your own Excellence. Empowering and uplifting people overcoming difficulties in life is a very grateful job. It is truly amazing making people aware that being your authentic self, is enough. Being your own Excellence is the greatness and magic that you contribute to our world. No competition needed. You are your own competition. It’s a true gift seeing people living that moment of awareness Being their own Excellence following the path of #kindness and #compassion.Humanitarian; Contributing, bringing global awareness in making our world a better place to live in peace and harmony for humanity and all living beings, trough acts of kindness and compassion. When it comes to our planet and all living beings, the essence is sustainability and we as humans should find a way to re-connect as souls with the rest of the living planet! Making a difference and leaving a legacy by touching lives with words of encouragement, inspiration, motivation, and action. Painting visions of a future much better than now as I choose Peace for the Healing of us all. Jobseeker; Jobseekers from a volunteer foundation to help with professional guidance in their career development. Jobseekers can also join a private group (with 4000+ group members) to share experiences and that we manage as a moderator to keep staying inspired and motivated. LinkedIn profile scan; I help you with a quick profile scan of your LinkedIn Profile if things are in order. For this, I use the checklists of professionals as LinkedIn Experts and recruiters (from the Netherlands) who share their checklists to help create a professional LinkedIn Profile. Women Empowerment Moderator; I also help moderate other online private groups. Like an online private group of women who have been sexually abused as a child or in their youth. Experienced expert (formal) caregiver; (field: acquired brain injury and dementia).My inspiring caregiver story, taking care of my mother. Where doctors gave her 3-6 months, God blessed us with a journey for almost 13 years, often going from impossible to Possible! Live a Life of great fulfillment: Be Your Own Excellence!