Facts do not cease to exist because they are ignored. (Aldous Huxley)

Since night does, indeed, follow day, I suppose it was nothing more than fair, reasonable, and predictable that the Age of Enlightenment should be followed by the Age of Ignorance.

The Lost Art of Connecting Dots

The Age of Enlightenment was characterized by the sovereignty of reason and the evidence of the senses. The Age of Ignorance is characterized by the disdain of sovereignty — of reason, of nations, of the individual — willful denial of the evidence of the senses, and the refusal to question or to think critically about anything. This has been pointed out before:

There is a cult of ignorance in the United States … nurtured by the false notion that democracy means that ‘my ignorance is just as good as your knowledge’. (Isaac Asimov)

Case in point: People in Portland, Oregon, rioted because George Floyd was killed No, wait. They rioted in Portland because Derek Chauvin was found guilty of George Floyd’s murder. No. Hold on. The riots in Portland continue because … well … no one’s really sure what’s going on there at this point, aside from a little recreational destruction.

On the other hand, there should have been a deafening outcry about last Friday’s news from Washington — “Biden Targets Racial, Social Inequities With Vast Spending Push” — or at the very least, a modest, “What the hell?” But there was nothing:

President Joe Biden’s $6 trillion budget request proposes record spending to reduce historical disparities in underserved communities, following his campaign pledge to promote racial equity as an inseparable part of rebuilding the economy. In the 1,740 pages of proposals he sent to Capitol Hill on Friday, Biden attempted to make good on campaign promises on climate, infrastructure, education and the social safety net.

On second thought, what’s the big deal? Money is like age: It’s just a number, right? So, we’ll spend $6 trillion here. We’ll spend $2 trillion for COVID relief there. Because our appetite for pork-barrel spending is greater than our appetite for bacon, we’ll mortgage our future and our national security. We’ll worry about it all later. Well, actually, we’ll mortgage the futures of countless generations after ours and let them worry about it later. And we’ll have to wear steel-toed shoes to keep from breaking our feet since the can we’re kicking down the road is now the size of a very large concretion, has the density of osmium, and is growing faster than any of us will try to measure it.

Nothing in the world is more dangerous than sincere ignorance and conscientious stupidity. (Martin Luther King, Jr.)

Talk about sincere ignorance and conscientious stupidity. Check this out: The world has been plagued by poverty and inequality for all of human history. What for? Why have we endured this perennial lack of economic utopia? According to the people we’re not supposed to say lean left because it’s a judgmental label, the historic, philosophic, and enduring public-policy dilemma of the allocation of scarce resources could be taken care of quite nicely, right now, thank you, if the rich would just pay their fair share (excluding people in Congress who, after being paid five-figure salaries, leave office with multi-million-dollar estates). As you’ll see from the accompanying graphic, the rich aren’t paying … oh, shit. Never mind that. 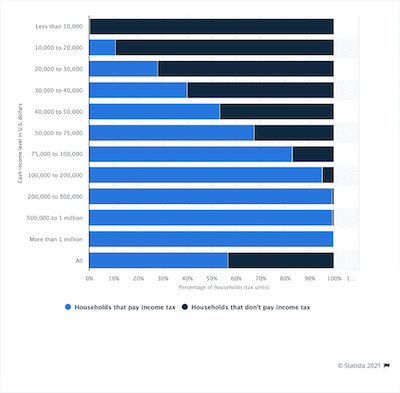 Dang! Well, if we can’t soak the rich anymore because, as the song goes, a drowning man can’t get no wetter, here’s another idea: Let’s take the money from businesses. You know, those mean, profit-making enterprises that provide the goods and services we choose to consume. Yeah. That’s the ticket. And guess what, Uncle Joe and Aunt Janet are already all over it. Yep. Here’s what they want to do:

Biden and Yellen … want to get governments all over the world to agree to charge companies no less than 15 percent for the State’s wisdom and beneficence … If private firms connived to fix a minimum price for their goods, they would be branded “robber barons” and their CEOs would be vilified before congressional committees. Do not expect Biden, Yellen and the government price-fixers who endorse a global minimum tax to ever face so much as a tough question at a press conference.

What are the two things they won’t do? Say no — to anyone to whom they’ve promised anything — and cut spending. And why do we fall for this baloney year after year, election cycle after election cycle, political promise after political promise? I can name that tune in two words that constitute cause and effect:

terrified people cannot process information well. they cannot make sound judgements. they do not weigh risk and reward, cost and benefit. they freak out, they demand action and flock to leaders with loud shouty voices and simple narratives to tell them what to do.

The problem with socialism is that you eventually run out of other people’s money. (Margaret Thatcher)

Along with the Age of Ignorance, this is also the Age of the Great Improvisational Power Grab. Those leaders with the loud, shouty voices are winging it, kids. And they’ll keeping making it up as they go along — as long as we continue to go along with whatever they’re making up.

Imagine the people who … are not ashamed to ignore, totally, all the patient findings of thinking minds through all the centuries since the Bible was written. And it is these ignorant people … who would make themselves the guides and leaders of us all; who would force their feeble and childish beliefs on us; who would invade our schools and libraries and homes. (Isaac Asimov)