Sometimes you run across things so obvious they beggar belief. It’s as if your brain freezes, as if you can’t trust your own senses to see what’s happening, to attribute cause and effect, and to react angrily, determinedly, and constructively. To illustrate the point, I offer two exhibits.

Exhibit A is this article from PsychCentral — “Schools Fail to Educate at Least 30 Percent of Our Students” — which says this, in part:

Most of the urban and rural students, primarily from families below the poverty level, are not getting even a rudimentary education … the U.S. has a 30 percent rate of students failing to graduate high school … in urban settings typically 50 to 70 percent of the students fail to graduate … What needs to be done is quite clear … take power away from the unions and ineffective school boards; require longer school days and longer school years; eliminate tenure for teachers and offer merit pay to the best teachers; fire those who can’t teach effectively; certify teachers without degrees in education but who demonstrate the ability to teach effectively (which also increases the percentage of minority teachers for schools dominated by minority students); fire principals whose schools are ineffective; fund charter schools; and offer school choice. So the path to success is known. But it is blocked by a recalcitrant bureaucracy and a stubborn teachers union that prefers the status quo.

Please take note of these excerpts from that citation:

But here’s what we are going to do: We’re going to put the power of the federal government behind every effort to maintain the status quo. We’re going to mobilize the Office of the Attorney General of the United States and the Department of Justice to protect and defend the teachers who’ve unionized to ensure their ability to do what they want, when they want to do it. We’re going to bring the Fed down on parents and other concerned people who care about more about the educations their children aren’t getting more than they care about the ideological, politically popular, special-interest brainwashing their children are getting. We’re going to shut them up, shut them down, and prevent them from speaking up in their own interests. And Uncle Sam will carry the big stick.

I’m sorry. What’s that? You think I’m blowing smoke or exaggerating? Oh. In that case, I invite you to get a load of Exhibit B: 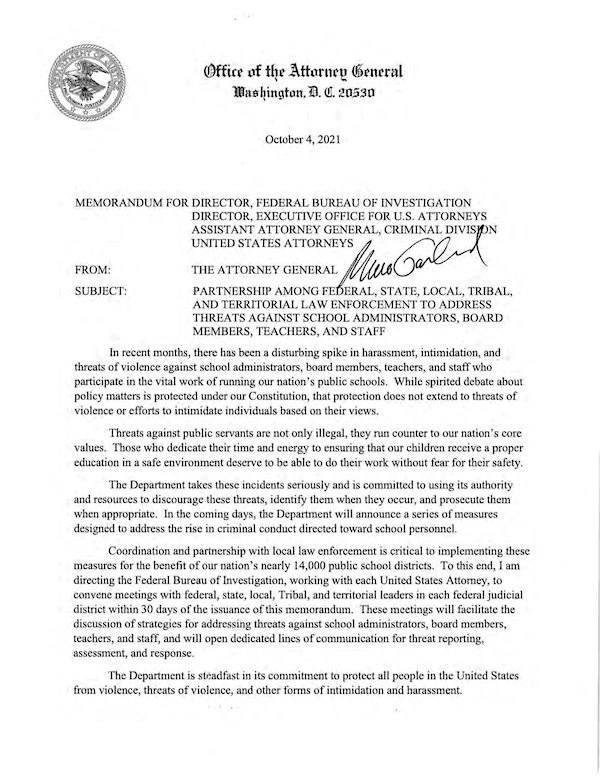 Two expressions come immediately to mind. The first — in a corollary to the admonition, “Never believe anything until it’s officially denied” — is earnestly, piously, and consistently uttered by all politicians who don’t want us to understand what their real motivations are. Those motivations are power, control, votes, and the political careers the Constitution recommends against their having. And what they always say is, “It’s for the children.” Bullshit.

It is happening here, kids. And we’re letting it happen.

That knocking sound you hear is the Piper. He’s pissed. And he really wants to be paid.

The Will O’Leary Rule