The Journey of Ideas Sperms

Our age is an age of competition and the true competition is for attention. Would you read a post that does not attract your attention or watch a movie that is of no interest to you?

The competition for attention is scaling up exponentially. Just think about it and ask yourself how many tweets we share every day. How many posts we publish on a daily basis worldwide? How many new songs launch every day? How many people belong to major social media platforms? How to rank first in search engines competing with millions of posts and ads?

It is obvious we live in an age of huge numbers and the struggle for attention is exponentially increasing.

We are getting close to how we came to this world. We came as a result of competition among millions of sperms with one sperm only fit enough to ferment the female’s egg leading to pregnancy.

It is a different challenge to be the fittest among millions than being first among a small number of competitors. You may win a scientific prize in your country, but it is far more challenging to win the global Nobel Prize. It is easier to be the number one squash player in your homeland but is very different to be the world champion.

Our world is turning into a sperms-like world. A huge number of competitors with one winner only shall emerge. The best-seller, the world cup champion, and so on. We are closer to a sperm-like society with one sperm only getting the cake.

The Metaphor of Sperms of Competition

The huge number of sperms competes for one target- the egg in the female body to fertilize. The goal is grand for the “prize” is the pregnancy of a baby. This is a very challenging situation. For sperms to compete they must first be in the right track- the reproductive tract. If not, no matter how fit they are they become out of the competition.

The sperms have to swim in a difficult viscous fluid and to make the swim they need to have the right morphology. This requires sperms to have the right shape of an oval head, of the body structure and chromosomes, and uncoiled tail so that the sperms may swim in straight lines. If a sperm misses any of these traits, it loses the competition.

The need for big challenges is that to have a highly fit sperm to fertilize the egg and create a baby. It is in big challenges that huge numbers may sort out to have a winner. So, is our business today, which faces huge challenges to reach the targeted customers?

BIZCATALYST 360° is the medium for publishing this post. It is the equivalent to the medium sperms has to swim successfully in. BIZCATALYST 360° does a great job on its homepage. It has sections to highlight hot posts this week, another section to highlight the editor’s pick, and another section to highlight the posts of a featured author. In this sense it serves as a natural medium to help the “sperm of posts” to swim and that the fittest sperms may reach close to the target- the readers.

Once few sperms reach close to the oval they have to open their shell so that the sperm may get in and fertilize the egg. The oval head is the right shape to do that.

The importance of the medium in which we publish posts finds great support from recent research findings. Literature findings show it is not as much the message as it is the medium and even memory that determines whether an Internet meme goes viral or dies without a trace.

A reader might ask me what is the relationship between posts ideas and sperm shapes. Visually shaping your ideas shall show you if the shape is fit enough to swim in hard mediums as sperms do. One recent post is that on what is It Like to See Ideas as Shapes. Thoughts and feelings are constellations in the mind of a man with a rare form of synesthesia.

It is about The Birthing of One Creative Idea from millions of suggested ideas.

Why do we need to generate millions of ideas to have one good idea? I am using the birthing of a child as a metaphor. We need millions of sperm-like ideas to produce one child from one egg. The birthing of a creative idea is similar. This explains my fascination of the fractal grid and its importance in generating sperm-like ideas in huge numbers.

Dr. Rod King is the pioneer of this work. He has invented the Fractal Visual Grid to generate millions of ideas easily and in a friendly medium. The image below of what is possible with this grid is self-explanatory. 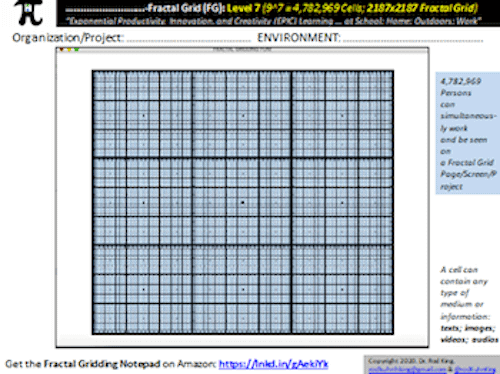 Imagine producing millions of ideas so that the fittest one would fertilize the “egg of the goal” and what a beautiful product emerges from using this grid.

The journey of sperms to reach their goal and fertilize the egg is challenging so that few may just reach near the goal.

What emerges- miraculous baby products? Great products come from fit ideas that found their way to the goal

One other dimension of the Fractal Visual Grid is the huge amount of resulting “Ideas Wastes”. These ideas are amenable to recycling, recombination and reinvesting for new possible uses.

Are We Witnessing the Emergence of a Modified Long-Tail Distribution?

The previous discussions revealed a new trend- the offering of millions of ideas, products, posts that are sperms-like. Only one product or idea will be able to fertilize the egg (goal) and produce a miraculous baby.

Are we moving into an age where competition is among winners with only one idea being the winner? Are we witnessing the emergence of a new distribution?

Beware of What Fills and Stirs your Pot