Late in 1998, I read a brief “call for connection” letter in a publication called Noetic Sciences that I had subscribed to on the recommendation of an alumnus from my college. It has been years since I had had any interest in doing much reading but I had followed a gut instinct and had been briefly perusing the magazine for several months when the few words penned by an inmate in a California state prison caught my eye. And heart. He signed the request for pen pals with the words “Captively yours” and always a sucker for a good play on words, I sent him a postcard of introduction.

I was living, and had been for more than 15 years at that point, in Japan, so on the surface, it was an unlikely friendship. He wrote back almost immediately, with well-polished words and phrases aimed at convincing me to join the list of supporters who sent him in money for the prison canteen. On one level I wasn’t unaware of the con behind the facade. But I saw and felt something in him so much more immense than the surface need and pain that the core purity became the only thing I could focus on.

Over New Year’s between 1998-99, just a few short weeks after our correspondence had begun, I traveled to Santa Clara CA to take a meditation intensive with my Guru. And all the time I was there, the thought kept running through my mind: “I’m going to be back in California in April.” I’m going to be back in California in April. How I didn’t have a clue. I was already working and traveling on borrowed money, and I had a husband and two children (7 and 12) so I wasn’t exactly the definition of foot free and fancy. But the feeling was unshakable and even 23 years later, as I type the words, I get goosebumps from the truth that I had already realized that, in April, I was going to get on a plane and leave my life in Japan for good.

Over the next weeks and months, the letters continued. And with each one, the conviction in every cell of my being that somehow, this man was the next chapter in the story of my life, got stronger and more ingrained in my every breath and heartbeat. I even had two close Japanese friends with whom I was able to share the unfolding events and feelings, and they – both mothers with young children of their own – were not only unfazed by the thought that I might actually leave my family and go be by the side of an incarcerated inmate who needed me more than they did, but in retrospect somehow had the knowledge even before I myself had fully accepted it that this was exactly what was going to take place.

Coincidentally (yeah, right) there was another meditation intensive in California scheduled for early April and I continued to take the necessary steps for international travel once again. Unable to comprehend that I really wouldn’t be coming back to Japan I booked a round trip ticket. A few days before my departure, I looked my Japanese husband in the eye and asked simply: “Are you ready?”.  Note that we had not discussed a word of all this. How could we have? And besides our communication had always been much more on the wordlessly spiritual level anyway. We met, married, had two children, grew each other up in many ways…and then it was time to move on.

“Life goes on”, was all he answered, a tinge of sadness in his voice that made me think that, on a subconscious level, he already knew this was goodbye.

For the record he was an excellent father and had always been considerably more of a hands-on parent than I was. I enjoyed the pregnancies and breastfeeding for a year, and then the spiritual wanderlust in me would take over and I would get on a plane at least once a year to be with my Guru wherever She was. And if you were privy to all of the experiences we shared during our 14 years together, I think it would be clear that each step prepared us for the next, leading up to what I can only call The Great Surrender.

I got on that plane on April 1st 1999, with only a backpack of clothing and $200 and absolutely no experience living in the US as an adult, flew to LA, took the intensive, and then the adventure began in earnest. Over in Japan, my husband – after years of struggling to find work that matched his skill set and personality – borrowed the money to open his own small store close to the apartment where they lived, and still owns and operates it to this day. The daughter who was 12 when I left graduated from high school, joined me and Cody (who was paroled in 2002 after 39 months of receiving visits from me) in Morgan Hill where Cody was on parole, moved with us to AZ when we found and purchased the first cabin on the mountain, and within 6 months time had moved in with our builder, a man 27 years her senior, 3″ shorter, with a heart of gold, who had unquestionably been “waiting for her”. 14 years later they have two children and are one of the happiest, healthiest families I know. And my son is an independent grown-up living his life and 100% doing his thing in Tokyo.

What is the moral of the story? I can’t answer that question for YOU but I’m sure that if, like me, you are a true Spirit Warrior, you will find the message in here meant “just for you.” No, I wasn’t there for my children when they came home from school. I wasn’t there to cook all their meals and do the laundry. But I modeled, with absolute conviction, what it looks like to Follow the Command of the Heart in full faith and surrender. And in both their well-adjusted, happy healthy lives, the influence of Mom is just as tangible as is the loving on-site presence that their amazing father gave them, while I was there and after I had left.

I read once that all spiritual practice is merely preparation for the moment when Surrender is offered to us; and that if we can say an unequivocal YES to that open door and walk (or fly…) through it, nothing will ever be the same again.

And thankfully, never will be. 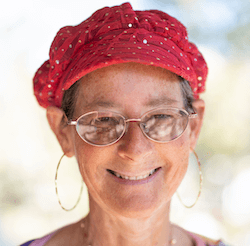 On Wings of Grace