The Evolution Of The Sharing Economy The sharing economy is a broad term used for on-demand, peer-to-peer economy. Using this concept, businesses provide consumers the ability and platform to share resources and services from housing to vehicles and more, typically via an online and/or application-based business model. Sharing economy, in the beginning of the 21st century was just seen as an innovation but now a bunch of companies operating in this line has created a separate stream of economy. The proof for this is the growth of companies like Uber, which is now present in almost 60 countries, and Airbnb, operating out of 191 countries.

There are several types of companies, which provide on-demand services in almost every business domain. They provide food, groceries, clothes, and services like drivers, electricians or plumbers at the click of a button. These companies provide employment to millions of people.

We define the shared economy as a marketplace segmented into two unique models:

A) Renting out underutilized assets

Airbnb—renting a home when not used

Turo—renting a car when not used

Uber/Lyft—service aside, the physical car you ride in can be classified as an underutilized asset

A survey by Pew Research Centre showed that roughly three-quarters (72%) of American adults have used at least one of the 11 digital commerce platforms. There is a wide variation across the entire population of Americans as to how they include these services in their daily lives. 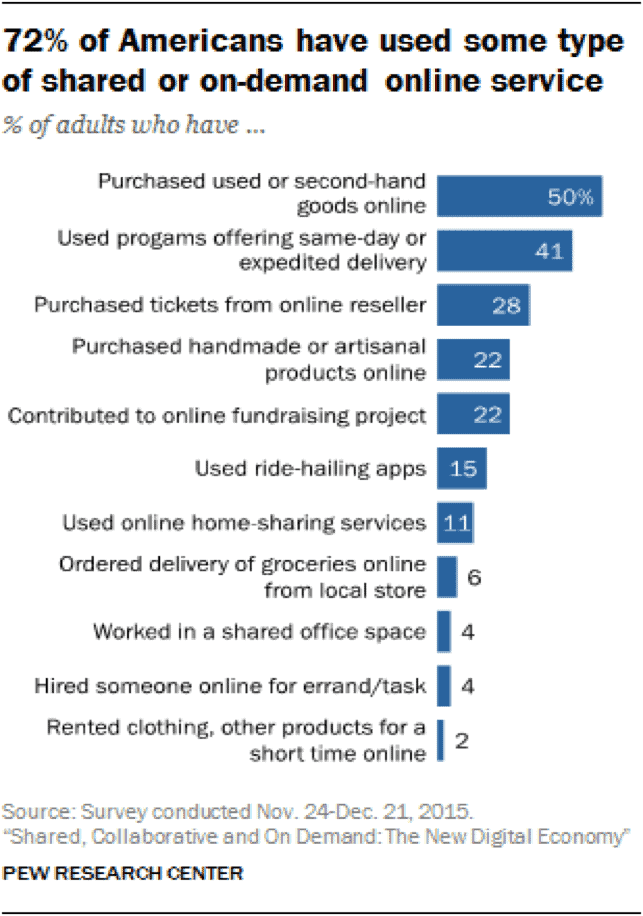 1) 50% of Americans have purchased or used second-hand goods online (examples include sites like eBay or Craigslist).

2) 41% have used programs that offer same-day delivery of items they purchased online (examples include services such as Amazon Prime or Google Express).

3) 28% have purchased tickets to a sporting or entertainment event from an online ticket reseller (examples include StubHub or SeatGeek).

4) 22% have purchased handmade products online (examples include sites like Etsy).

A relatively small minority of Americans uses several of these services. These services are often new to the market, or those whose availability is more geographically constrained than those listed above:

A) 6% of Americans have ordered groceries online from a local store to get them delivered to their homes (examples include services like Instacart, Peapod or Fresh Direct).

B) 4% have worked in a shared office space that people can reserve for a short period of time.

C) 4% have hired someone online to do a task or errand (examples include services such as TaskRabbit, Fiverr or Amazon Mechanical Turk).

D) 2% have rented clothing or other products for a short period of time online (examples include sites like Rent the Runway).

Americans under the age of 50 are twice as likely as those of 50 and older to buy second-hand products online (63% vs. 34%). This behavior is not found commonly among the blacks, those who have not attended college and those with relatively low household incomes.

The rural residents are just as likely as those living in urban or suburban areas to buy second-hand goods online.

College students whose household income is high and those under the age of 45 are most likely to incorporate shared and on-demand services into their lives.

A survey by National Technology Readiness Survey (2015) shows that US consumers are spending nearly $57.6 billion in the on-demand economy.

The foundations of the shared economy have been laid for 25 years:

1989: Tim Berners-Lee invents the World Wide Web, creating the language and architecture for sharing information over the Internet.

1995: eBay introduces a user-generated feedback system of buyer and seller ratings to prevent fraud. A colored star is earned with every positive rating either by the buyer or the seller.

1999: Napster popularized peer-to-peer file-sharing, through which we can share personal assets (MP3 files of music, in this case) with a connected “community” of anonymous Web users.

2000: Zipcar becomes America’s first car-sharing company [Source: Eha]. The idea catches on with city-dwellers who don’t want the hassle and expense of owning a car but want a quick and easy way to rent one by the hour.

2004: Facebook builds on the successful model of MySpace; enabling users to create personal profiles, make “friends” with other users, post text, photos and videos, and comment on each other’s posts.

There are many such examples as above. 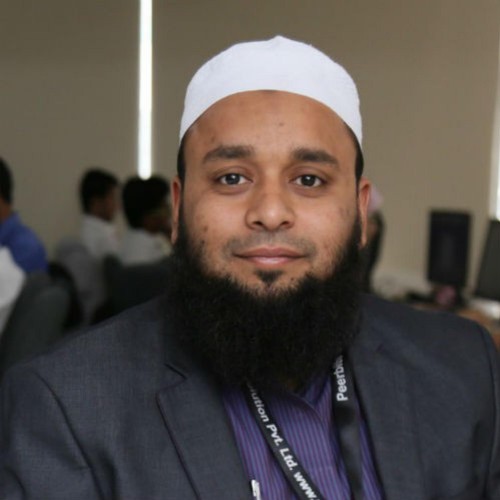 Shahid Mansurihttps://www.peerbits.com/
SHAHID Co-founded Peerbits, one of the leading mobile app development company USA, in 2011. His visionary leadership and flamboyant management style have yield fruitful results for the company. He believes in sharing his strong knowledge base with leaned concentration on entrepreneurship and business. Being an avid nature lover, he likes to flaunt his pajamas on beach during the vacations.