“The Circumstances Necessitate the Pomp”

“Hooray, Hooray” the street lined crowds cheer and clap as the procession progresses towards the palace.

“Doot Do Do Dooooooo!!!!!”, the fanfare horns blare in unison announcing the arrival.

“Presenting the Browns of Baltimore!” 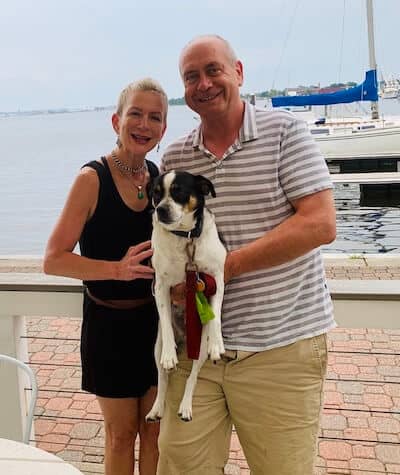 Okay, it’s just Mark Brown and Shelley Brown, no relation, walking into the house from their trip to the grocery.  The only permissible outing on this day, April 5, 2020.  River, the mixed-breed dog of the manor, okay condo, is there to greet them as if they’ve been gone for a year when it’s only been just over an hour.  “Who’s a good boy?” is said in unison at least 3 -5 times with a pat, pat, pat of the thighs. River, affectionately known as Skipper, Clipper, Clip-Clop, Slippy, and Slip-slop just to name a few because he never answers to any of them, wags his little tail with raised bottom in downward dog.

Congratulations young River for recognizing our absence.  I know you would answer. “Me! Me!” in response to the previous and redundant questioning if you could as you scurry away realizing there is nothing edible being tossed to you.

“The Browns of Baltimore” sounds regal right?  Much more regal than, “The Browns of Chicago”!  Really, say it out loud and notice your chest rise and your posture slightly more upright posture.  Look at you now, you’re at least a quarter-inch taller.  Did you do it?  I bet your shoulders moved a little.

“What are you doing?”, asks Shelley Brown.

“Looking at the Hero app”, replies Mark Brown, no relation. Except she can’t tell if he is saying “Ero” or “Hero.”

She asks him if he saying “Ero” or “Hero”?  He answers her again and she still has no idea which one it is, a confused look on her face, similar to the way people cock their head to one side while looking at River and trying to figure out which breeds make up his mix. Shelley is reminded of the time, just a few weeks ago, when she insisted, The Browns of Baltimore sit down on the couch to sing along to a YouTube video streaming a song with lyrics.

She asks him, “What song would you like to sing?”

Writhing with laughter she asks him to say it again.

Mark looks at her with his typical “She’s totally from Mars” look and repeats, “Wild Orses.”

Shelley, practically peeing herself and overcome with non-stop and as some would say, “school-girl” giggles contains herself long enough to try to imitate him, “Orses, Orses, Wild Orses.”

The English member of the Browns of Baltimore hasn’t lived in England for almost 38 years and when he speaks, people will often look perplexed for a moment.  It’s the same look I notice when people look at River trying to figure out which breeds make up his mix.  Mark Brown, no relation, has a unique dialect, Yorkshire (where the sound of the letter “H” in front of a vowel is apparently forbidden) mixed with a bit of New England.

When I was in college, I briefly hooked up with a guy from London strictly because of his accent and maybe a tiny bit because of his strangely cute male pattern baldness at the ripe old age of 18.

Mark didn’t talk much the first few times I met him.  We were usually with a group of friends including his ex-wife whose last name is also Brown, no relation.  No, no, I know what you’re thinking.  I didn’t break them up and yes, it’s a total coincidence that we share a last name which I will promptly hyphenate during the post quarantine nuptials sometime in the near future or never.

When he finally spoke to me, I looked at him perplexed much like someone who looks at River when trying to figure out his breed mix and it wasn’t because I had just watched him complete the saltine cracker challenge.  The saltine challenge is a food challenge or competition in which a person has 60 seconds in which to eat six saltine soda crackers without drinking anything.  Riveting!

Even though he isn’t as “Englishy” as the guy from collage, though they do share the same strangely cute male pattern balding, he is English enough for me to have adopted some of his “Englishy” verbal mannerism including the following:

Of course, the typical words such as “loo”, “there there”, “brolly” and “Wellies” are also de rigueur in our home as well as the requisite “Ininit?”, “Didinit?” following every statement and sounding like a question you are supposed to answer but nope.

The most “Englishy” word utilized by Mark Brown, no relation, is the adjective “Lovely.”

“How was your day?” Shelley asks.

“How do I look?” Shelley asks.

On April 9th, just like every day over the past few weeks,

Lord Brown of the Baltimore Browns will enter the drawing-room.

Recalling how earlier in the day he uttered, “It’s me Birthday. Ininit?”, The Lady in Waiting, Lady Brown, no relation, will curtsey and lay a small box at his externally pronating feet.

Lord Brown will beseech her, “What is it me Lady?”

“Why it’s a box of adjectives. Ininit?”  She will say hiding her desire to fall over herself from non-stop and as some would say, “school-girl” giggles.

With a look of utter confusion, the same look I notice when people look at River trying to figure out which breeds make up his mix, he will say,

We will then carry on for a game of “Hot/Cold” in order for Lord Brown to find the other trinkets I’ve hidden around the castle.

Wild Orses couldn’t drag me away…

Collage art by Shelley Brown, “The Circumstances Necessitate the Pomp” 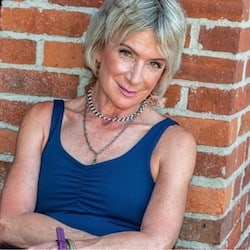