On the blog of one of my businesses, I recently published a post called, “Science Friction”. In that post, which is about the automated mechanization of marketing and sales, I wrote this:

The mechanized dehumanization of marketing and sales (among other things) can’t succeed long term: We’re human beings. It’s a matter of nature and definition that we’ll never escape, defy, or surrender our tendencies to interact as human beings. Neither will we forego our social sensibilities or our need to engage each other emotionally and to be so engaged, even in commercial contexts.

That automated mechanization leads to the derivation of the proverbial sales funnel. (Good grief.) That’s exactly the kind of depersonalized, overly complicated crap, of course, that gives marketing and sales a bad name. And it’s also what led to the transferring of a product name to pernicious forms of digital marketing.

Here’s a diagram of the sales funnel: 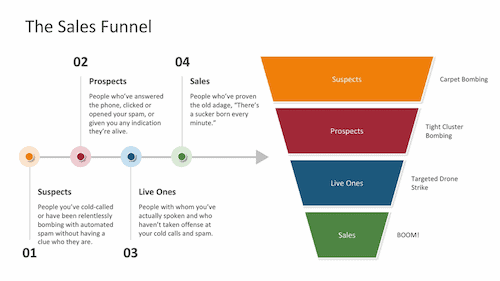 No Money, No Problem

In the context of our financial relationship (Ouch!) to government, it occurred to me I could just as easily have written this:

The mechanized dehumanization of taxation can’t succeed long term: We’re human beings. It’s a matter of nature and definition that we’ll never escape, defy, or surrender our tendencies to interact as human beings. Neither will we forego our social sensibilities, our resistance to being hornswoggled, or our need to engage each other intellectually and emotionally and to be so engaged, even in the ways we’re taxed and misrepresented.

Aside from ignoring — or passively accepting — everything that’s being done to us (not for us) by the governmental surrogates we elected, what the hell are we doing? Among other things, we’re blithely ignoring all the shit that’s being dumped into the funnel daily. 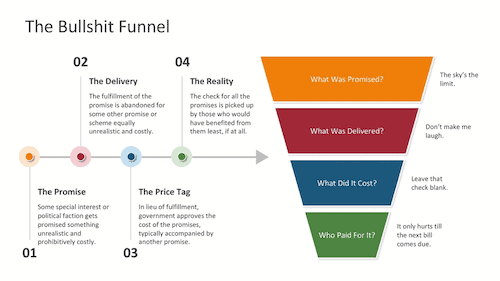 It’s been going on for so long, we wouldn’t be able to see it anymore, even if we were inclined to look for it. But we’re not. So, it doesn’t matter. We live in a variation of GIGO (Garbage In, Garbage Out). That variation is BIBO (Bullshit In, Bullshit Out). We don’t even care. Why should we? Everything will be taken care of by … well … we haven’t quite gotten far enough to realize the buck stops with us.

It’s tempting to say money’s finite. But the truth is it’s not. As we’ve proven many times over, when currency gets short, we’ll just mint more. Value, on the other hand, is finite. The more money we print, the less value we have. That’s why we have runaway inflation. And it’s why political promises are so dangerous.

As the saying goes, time will tell.