The 10 Most Common Pet Office Peeves 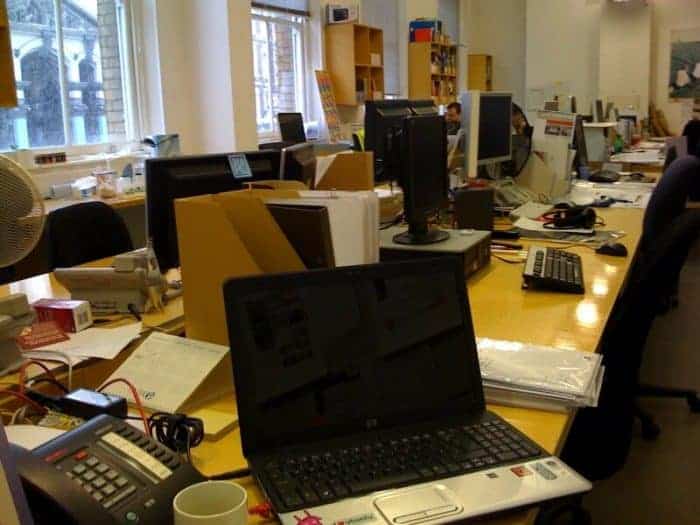 From repeating yourself over and over to arduous meetings and jumbled jargon, what makes office workers mad?

Considering you spend over a third of your waking hours at work, it’s a good idea not to spend that much time frustrated by loud typists and silent-but-deadly producers.

Read on to discover the nation’s top 10 pet peeves at work, which are guaranteed to send you round the twist.

Ignorance is (not) bliss

Ever said the same thing five times to a colleague? You probably let them off the first time – they were probably busy.

But after the second time, when they’ve still got their earphones in, it’s just rude.

In a survey by Printerland.co.uk, the biggest pet peeve, as voted for by UK employees, was people not listening when they’re trying to convey a vital message and end up endlessly falling on deaf ears.

Please sir, can I have some more?

The research also showed that a fifth of workers fear asking their boss to take their holiday – days off that they’re actually entitled to.

In addition, over a third of staff felt uneasy about calling in sick, with genuine reason – something that shouldn’t be a problem.

Some people can cope with an overflowing inbox – half of which remain unopened for months – or at worst, forever.

But by not replying to emails, you actually slow everybody else down, resulting in people across the nation being unable to get on with their to-do list. Not only that, you’re likely to forget important meetings or deadlines.

Make time to respond to emails. You could allocate a few mini time slots during the day to ensure that you do get back to people so that workflow continues smoothly.

Meetings are dull at the best of times, so why make them longer than they need to be?

They distract you from the tasks you were doing, halt your workflow and often occur when you’ve got the munchies and you’re not in snack-reachable distance.

It would help if people came prepared to meetings so that items can be discussed quickly and you could always try suggesting ways to speed up the chats, meaning a more productive day ahead for everyone.

A world without wifi

It’s hard to run most offices without the internet these days. So, when the system goes down it can mean whole offices can’t get on with their work. What a nightmare.

This can end up costing employees more, as desperate to please or finish tasks on time, they resort to using their own data on personal mobiles.

Avoid the scenario by ensuring your office has a reliable internet provider to ensure that this problem doesn’t occur too frequently!

There’s nothing worse than a sniff of something unpleasant and no one to pin it on.

If you bring your stench into the workplace, it’s sheer torment for your colleagues as they have nowhere to run – and that goes for body odour too.

To take you colleague’s consideration into account, take a bath, invest in a deodorant and if you must trump, go to the bathroom!

So many workers think it’s the job of the office cleaner to wash up the pots at the end of the working day. Yeah, that’s right – crusted-on ones like porridge or soup.

For everyone to get along in an office, there needs to be harmony – and that’s not happening when the sink is stacked up with plates – and even worse, the food hasn’t even been scraped into the bin.

Don’t run the risk of annoying your work pals. Wash your pots when you’re finished.

Even if you think this is just your problem then you’re wrong. It often encroaches onto the desk next to you and can soon spread where it’s not wanted. If the equipment you need to do your job is taking over a small desk, why not invest in some space saving hardware like a portable printer?

That way, you give yourself more room for bits of paperwork and more importantly, snacks.

Good investments for offices are wireless printers as they give offices one less cable to trip over. It’s also one less problem with where to place the printer, which will stop Mildred moaning that a) everyone is standing around the printer which is next to her desk and b) the noise is distracting her from doing her work.

So, if you really want to annoy your colleagues, with a little thinking outside the box, you could drill down and use some annoying office buzzwords.

There’s nothing like a straight-talking person to deliver a message, so next time you decide to leverage some ideas, how about this paradigm shift – drop the loopy lingo.

So now you know what annoys your colleagues, avoid these pet peeves as best you can!