Teamwork At The Speed Of Sound

Sometimes the “chemistry” of a team just works.  In this piece reflect on an amazing project to bring 6 perfect strangers together from all over the UK to Bernie Tormé’s studio in the garden of England, with the sole ambition of honouring my friend Bill Nelson, leader of English pop art groups Be-Bop Deluxe and Red Noise. Bill has given us over 40 years of pleasure through his continuous creativity. United only by a shared purpose and passion for Bill’s music we set about recording three songs by Bill’s first group Be-Bop Deluxe, ending up in recording four in just under 6 hours. The background story as to how we managed to achieve so much from a cold start is worth exploring. In just 22 hours, the band formed, stormed, normed, performed and reformed from perfect strangers to what Bill would call permanent flames.  This experience offers important transferable lessons about how to develop a high-performance team in record time from an extremely unpromising start point.

The “Lazing Apostles” (a spoof on one of Bill’s songs entitled Blazing Apostles) were selected using the internet after I placed an online “advert” for band members on Facebook. There were no auditions, interviews or psychometric tests. Nobody knew each other before we met with the exception of the drummer, who I worked with during my time at The Wellcome Foundation. It seemed that everyone intuitively understood the “job spec” and the level of capabilities required. All I did prior to meeting face to face was to arrange a brief meeting on Skype for an initial social chat.

The band we ended up with were a motley crew: Two management consultants, a film producer, an odd job man, a council officer, a druggist – not quite the usual rock’n’roll credentials!! 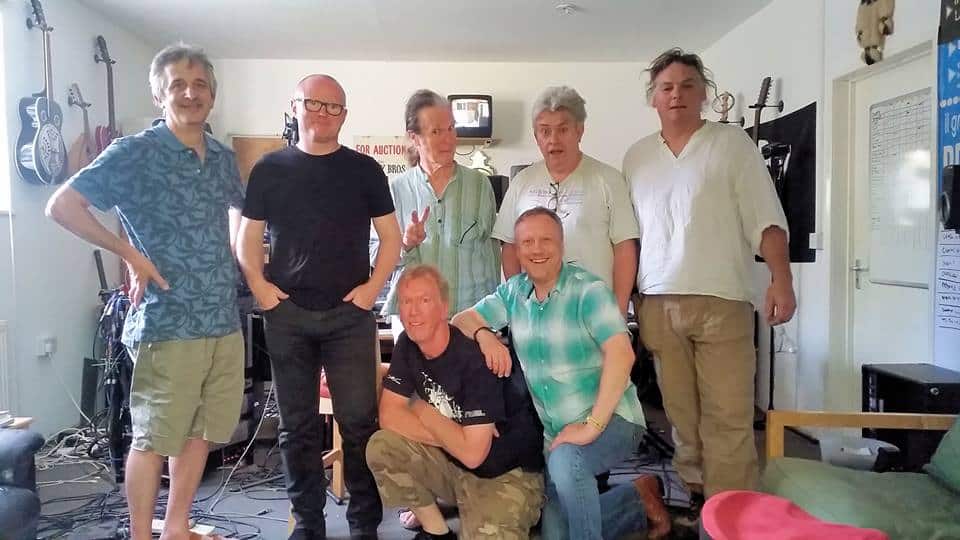 We had agreed to attempt three songs on the day, possibly two if things went less well. I converged our song choices to three using a Delphi type process using a secret ballot on a list of songs chosen by the group. This meant there was a razor-sharp focus to deliver these songs on the day and no divergence to try other songs. This is essential under limited time conditions. We also agreed on the structures of each song through e-mails and sharing definitive template versions of the songs from YouTube. Each member then set about learning their parts individually – there were no joint practices and fairly little discussion prior to meeting in person.

Getting the Chemistry right

Given our complete lack of playing together, we sensibly agreed to meet at Bernie’s studio the night before, with the ambition of running through the songs once or twice and having a few beers to develop the essential “psychological contract”. We needed just over an hour of physical practice before we retired to the pub to let our work incubate overnight …

Without the use of a flip chart or holding hands in a circle, everyone in the band got the rules of engagement.  In hindsight, I think they were:

Start with the end in mind

Given the huge geographical separation of the band members (I estimate we travelled some 1500 miles between us to attend the recording session), the most important thing we did was to lock in the recording date at the beginning. Creativity and genius count for nothing if you are not all in the same room at the same time!

80 percent of success is showing up

Here are the four songs we produced on the day ⤵︎