Strike Up the Bandwagon

I had an out-of-body experience the other day.

I was reading a trade magazine (which I won’t name for fear of being sentenced to a long stretch of incarceration with a dude named Tiny as a cellmate), and I came across a term I’d never encountered before. The term is climate justice. As soon as I read it, I felt as if some ethereal version of me was floating outside of and above me, slowly gaining altitude. As my ethereal self ascended, I was yelling back down toward the self I’d left sitting stupefied and drooling at my desk:

“Dude! It really happened! We finally got to the point at which we’ve become so gullible, so afraid, and so reality-averse we’ve allowed the changing climate of a dynamically evolving planet to be co-opted for sociopolitical subterfuge and corporate manipulation! And people are actually falling for that shit!”

Then my ethereal self vanished in the clouds.

To snap myself out of my reverie, I picked up the glass of ice water I’d left standing on my desk and poured it down my shorts. (In hindsight, I wish I’d opted for something slightly less traumatic.) After I dried off and warmed up, I took it as a measure of my sheltered existence that when I went to Wikipedia, the term was already there:

Climate change. An ethical and political issue. When frame is used in a context like that, you can be sure you’ll be able to sniff to your heart’s content and never catch the slightest whiff of irony:

frame (verb): to incriminate through the use of false evidence, information, etc.

Since the article I was reading in the trade magazine was about ESG (brace yourselves), I did a little more digging and found this on a website called JD Supra:

Ten years ago, issues of corporate social responsibility (CSR) – such as measuring carbon footprints, socially responsive company policies, or ethical supply chains – might have been championed by activist employees or customers, but they were not a business objective for most organizations. What a difference a decade has made! Social change, advances in technology, and the ability to prove ROI have elevated issues of environmental, social, and governance (“ESG”). These are now hot topics in the boardroom and increasingly a requirement for investors, employees, and customers.

What a difference a decade has made, indeed. But let’s look back a little farther. We’ve gone from hippies and Earth Day to Congress and the EPA, from the EPA’s 1970 budget of $1,400,000,000 and a staffing level of 58,000 employees to its 2020 budget of $9,057,401,000 and a staffing level of 14,172 employees. (Yep. There’s nothing like a good public-sector bureaucracy to ensure its self-indulgent bloat.) We’ve also gone from the hypocrisy of Al Gore to global warming, from global cooling to climate change, from private-sector panic to CSR, from the political, special-interest agenda of ESG to the shameless extortion of ESP — Especially Spurious Pandering.

It’s enough to make any self-respecting skinner start to wonder: When the hell is the pendulum going swing back toward unity and sanity? And what do I have to do to get my piece of the public pie before it does?

Well, I don’t know about the rest of you, but I’ve come up with my own special interest. I’m calling it MAPS (Micks Are People Sometimes). I’m going to campaign to make sure ethnic slurs like Paddy Wagon, bog-trotter, narrowback, harp, taig, carrot top, coal cracker, fumblin’ Dublin, hibe, mackerel snapper, pot-licker, shillelagh hugger, tater tot, and turf cutter are classified as hate crimes. I’m going to lobby to get Saint Patrick’s Day declared a national holiday. I’m going to crusade to have the shamrock replace the rose as the national flower. I’m going to insist on getting free Guinness everywhere I go. And I’m going to call that stout justice.

I’m also going to introduce this meme and its associated hashtag as the standard for my cause. 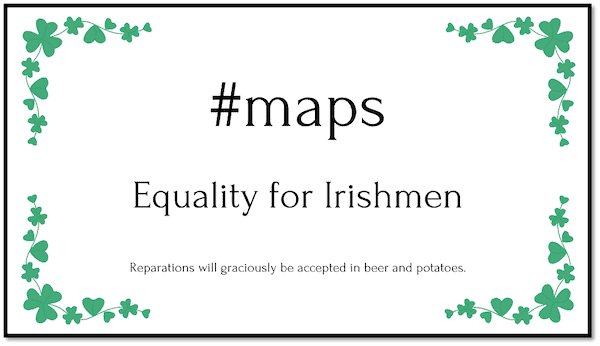 If you think you deserve special treatment for something, anything — or if you need help making something up (at this point it really doesn’t matter what it is) — call the ESP Hotline at 1-800-GET-MINE.

Call now. It’s only a matter of time till we get real and stop this shit.