Standing Up for Human Rights 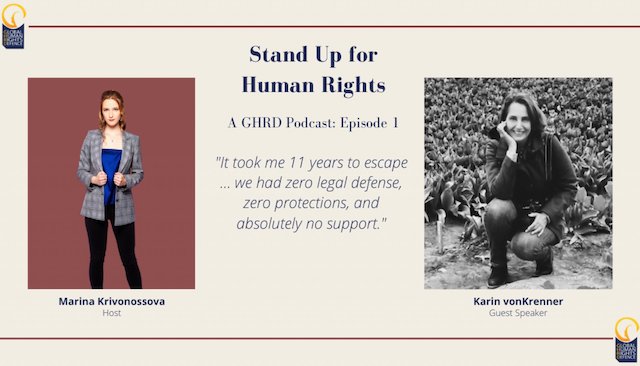 Welcome to the Stand Up for Human Rights Podcast, Hosted by Marina Krivonossova. Tune in for the story of Karin vonKrenner — a journalist, photographer, and ex-fugitive — whose landmark court case relating to kidnapping across borders changed the way human rights are viewed in a judicial setting.

Marina: Hello and welcome to the Global Human Rights Defence podcast: Stand Up for Human Rights. Every episode of this series will feature a unique guest who’ll share their experiences and expertise pertaining to the human rights topic of their choice, so no two episodes will ever be the same. I’m your host, Marina Krivonossova, and I’m excited to be here today with Karin vonKrenner.

Karin vonKrenner has spent her life traveling and living around the world since she was “knee-high to a cricket”. As an AP-trained correspondent and human rights legal advocate, she focuses on bringing new perspectives to tough issues.

In 2008 she challenged the Hague Convention On Kidnapping and introduced new protection protocols for women and children fleeing domestic violence across borders. Karin is currently writing a book; “Collateral Damage” based on her experiences as a journalist and fugitive. She has been recently featured in Voice magazine, Access To Justice and nominated for the Athena Award. In 2017 she co-founded “The Business Of Diversity” event as a platform for diversity communications in the business world. Karin is a freelance journalist, photographer and currently, Founder of “Project-ASK.org” a platform for social change through the medium of art that was inspired by her travels during the 2020 pandemic.

Welcome, Karin, it’s great to have you here. Can you tell our audience a little more about the topics we’ll be tackling today?

Karin: Hey Marina, it is absolutely wonderful to be here, and I love the fact that you brought me here. We’re gonna be talking about international law, but in a very specific arena, that’s the Hague Convention on kidnapping, which is again, it’s a very specified area when we’re talking about international law. It does cross into human trafficking because of the things that happen within that arena, and obviously domestic violence is a huge one. So, all these are very women and child-centered issues, but there are men involved in it, I’ll say that from the very beginning. Less, but there are some. So, I’m gonna be delving into that very interesting, dark area, and my expertise literally comes from being a kidnapping parent and fugitive from Interpol, FBI, and a few other people. (Chuckle)

Marina: Oh, wow! So very direct experience there, I didn’t know that! (Chuckle)

Karin: I started out as a journalist in the Middle East, worked for Middle East Review, ANSA, Action, and a few other organizations, I was a war correspondent. I always say my first war was actually in the Philippines during the Marcos Era, and I worked my way across into the Middle East, and summarizing, along the way I had a son, and at that time the country I was in was not part of the European Union, and to really, really age myself here on Zoom, computers were kind of a new thing, the internet was a new thing, so information gathering, connections, the network, all these wonderful things that we have today did not exist. (Chuckle)

Karin: It took me 11 years to escape — and “escape” is the word I’m using, and under the Hague Convention at that time — it was the Hague Convention for international kidnapping — and as a kidnapping parent, which would be me (chuckles), we had zero legal defense, zero protections, and absolutely no support. At that time, we were considered high-level felons and considered dangerous criminals.

Marina: Wow… And I think when most people think of kidnapping, they think, you know, a guy driving up to a playground, grabbing someone’s child and running, so that’s very clearly not what you’re talking about, so can you explain more the kind of kidnapping you’re referring to?

Karin: So, I’m referring to — like I said — it’s a very specific area that the Hague Convention tried to cover, and initially it was designed for protection, but actual usage of the Convention became something that was almost terrifying to those of us on the opposing side of that Convention. It never addressed issues of domestic violence. It never addressed protection, per-se, even though the overall umbrella implied it. It was very much directed to jurisdictional issues and to the seemingly presumed-innocent parent who had the child kidnapped from. So… Kidnapping is perceived, like you said, as someone grabbing a kid and horrible, horrible things happening and disappearing with that kid, and we don’t even wanna go there down that dark hole of what we can imagine there.

Karin: But nobody’s ever addressed the side, in a large way, of kidnapping for protection. The fact that many women around the world are doing something to try to escape a situation, and if you work with domestic violence, they always say eight is the standard number for a woman to try to leave a domestic violence situation. We up that to an even higher, almost impossible number debating on two issues.

One, if she has children, it becomes harder to leave, not easier. Because it’s a financial issue. And women will stay in a domestic violence situation that’s been horrific from the outside and can be internally, but for the sake of their children, they will sacrifice literally their lives because there’s no other option for their child to be fed, housed, or have a roof over their head. We know the generational damage that does, we have the studies now. But we’re still dealing with what’s primarily a legal and financial issue.

Marina: I can very much see where you’re coming from with the financial aspect, but I’m very much curious… I’ve obviously never been in this sort of situation, so everything that I can say will be from, you know, the internet, or something I heard from someone, but in this situation pertaining to domestic violence, wouldn’t the first course of action be to go to the police and seek protection and hope that the law can protect you? Like, how it is that the law is protecting the person inflicting the damage?

Karin: Okay, I’m gonna bring this back into the international arena.

We have many countries out there that will happily sign anything because it looks great. It’s a good political push.

Karin: In the international arena, we have two issues: when we do the law, we’re working internationally with politics, it’s very much a political issue, especially with international law. And one of the primary things we have — the issue between signing a convention and ratifying the convention. We have many countries out there that will happily sign anything because it looks great. It’s a good political push. But too usually, to access it as a legal tool, that convention has to be ratified. And that’s a whole different thing. So, for instance, with the Hague Convention, there are several countries still to this day who have signed on to it, that means absolutely nothing, to be honest. Unless they ratify it, it is not a legal tool or a user process that can be accessed. Now, when we deal with international law, we’re also dealing with jurisdiction. And the first thing I say to anybody is always, “I don’t care where you were born, I don’t care what your passport is, once you put your foot on the ground, you are liable to the laws of the country you’re in.” That’s just the bottom line.

Karin: In my case, you can appeal, and many did. Like I said, mine was very educational, I can do Fugitive 101 now: How to Do It! (Chuckles) And How Not to Do It!

Karin: Like I said, there was no information available to me, so it was a very hard and long learning curve, to say the least. You’re in a jurisdiction, and that jurisdiction of the court has the majority of power over you, as long as you are physically in that arena, so as tourists, we will go and visit a country, with our children and with our family, and we might get a speeding ticket, which we pay that speeding ticket off, but we’re pretty okay. We haven’t broken any major laws. And as we all know from the number of Hollywood movies, the minute you break a law in that country, you’re in big trouble. 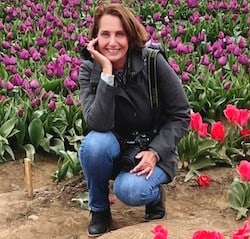 The Patience of Job