There is also a belief that after death a soul goes to heaven or hell, but then gets another chance on Earth, to fulfil the purpose a previous life has prepared them for, or to atone for the sins of a past life. The soul also retains a memory of these past lives, but they are incredibly difficult to retrieve and interpret. However because I’ve recently been on a mighty quest to find my memories of my current life, I think I have become more aware of memories from my previous lives. Throughout my life, I’ve found an affinity with a couple of professions without ever working in them. This could be my soul’s memories surfacing. For example, I’ve always had a bond with businessmen who are also hobby farmers. I’ve also always yearned to work in Intelligence and Security. Both Boeing and Lockheed Martin had contracts in this area, but I could never find an opportunity to work in them. I’ve also always been fascinated by tall ships from a young age.

I also get a strong feeling of connection to a place without any apparent reason. I feel this same connection to my grandparents’ old farms and my childhood home, but that’s understandable. But I feel a strong connection in a couple of places and I have no idea why. Could this be my soul’s memories surfacing? Don Heads and the adjoining Lillico Straight on the North West Coast of Tasmania is the first one. I never spent a lot of time there when I was a kid, other than being bused out to start our cross country run at Don Heads. But when I’m getting close to these places, I can feel the location drawing my soul in, propelled by an inner sense of calm. It feels like home. There was a port established in the Don River near the Heads. It’s no longer there because the sandbar was removed from the Mersey River and the bigger Port of Devonport was established. I believe my soul has a memory of this place. Perhaps in a past life, I was a shipbuilder in the Don River Port, maybe living on a hobby farm in Lillico Straight.

The other place I can feel drawing me in is at Bungendore, in NSW. It’s such a lovely little country town, surrounded by lush green farmland that I’ve always felt an affinity towards. The town of Bungendore also has many quaint shops, filled with handmade items. But I get a stronger feeling close by, when I drive past the turnoff to Headquarters Joint Operations Command (HQJOC) even though I’ve never been out to HQJOC. HQJOC is the operational headquarters of the Australian Defence Force worldwide and they run many Intelligence and Security operations there. Perhaps in a previous life, I did work in Intelligence and Security at HQJOC, perhaps living on a small hobby farm in nearby Bungendore.

I’m not sure there are any right or wrong answers here. Nobody knows for sure and everyone has and is entitled to, their own beliefs. Before my cancer journey, I wasn’t sure if there was life after death, but after everything that has happened, I am sure. I believe in life after death. I’m not sure what it’s like, but having that belief gives me hope. Hope that I will continue my journey after I leave this life, in whatever form that takes. That I will be able to return to Earth, to look after my son and help him out when he needs it, just like my dad helped my mother downsize and me find a job. This gives me hope. 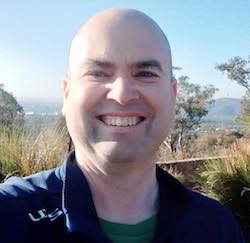 History is Rewarding and Important

Be Master of your Fate, be Captain of your Soul