I’ll Make this Sort of, er, Kind of Clear

You’re not going to like what I’m about to share. You’re going to start hearing these words uttered by just about everyone. All the time. You’ll be incredulous and ragingly aware at the number of times other people use them – and that you use them.

I get it. When I was made aware of their use, as an experiment, I counted the number of times I, my cohost, and guest used them in one forty-minute podcast: 36.

Used as intended, they hedge one’s thinking. They are meant to position whatever follows as less precise, accurate, or certain:

“If he were truly honest with himself, he was only kind of interested in the job.”

“The dorm food was sort of healthy.”

Reporter Steven Kurutz theorized in a New York Times article back in 2014 that our seeming increased use of the words were “a linguistic manifestation of the indefiniteness we feel, a noncommittal expression for a time of rapid technological change and instability across our social structures.” That’s saying that our use of them is deliberate; we’re consciously interjecting them because sociologically speaking, we’re vibrating due to the dynamic world we live in.

Could be, I guess. But two points argue against that theory at least when used as a broad brush explanation:

I’m no linguist, but I think our over-use of these terms is akin to our (lazy) use of common verbal fillers elsewhere. 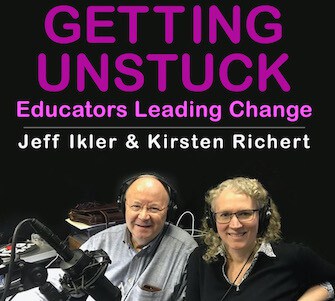 OK, so if imprecision in our thinking and language is a problem, let’s flip that coin over to this week’s podcast interview and guest, Colin Seale. Colin is an educator, attorney, and self-described critical thinking evangelist. He is the author of Thinking Like a Lawyer – A Framework for Teaching Critical Thinking to All Students. And there is nothing “sort of” or “kind of” about his argument or instructional framework.

When you think like a lawyer, you’re hardwired to look at problems and solutions from multiple angles, to ask questions, and to get the information that you need to make different claims, and then back up those claims with evidence. Why should we wait until law school to introduce kids to those thinking skills?

Simply put, if we want today’s students to take productive steps in our ever-evolving world, they need to be helped to think critically. Truth be told, having students think critically is not a new idea. We were sprinkling critical thinking questions into our lessons way back when I taught. And “sprinkling” is the operative word there because what is new is Colin’s systematic approach. Barriers stand in the way – how and when we teach thinking skills and to whom – but as Colin explains, they’re surmountable if we’re deliberate in how we approach things.

If you made it this far, thank you! And if you’re intrigued enough to listen to the podcast episode, thank you again. We’re kind of partial to this one.

Being Curious Enough to Avoid a Big Regret