Some Ideas about Change Teams

I heard this at a  workshop in some change effort somewhere. I don’t remember who This  speaks to what John Kotter calls the group of leaders directing a change, a  “guiding coalition.” The guiding coalition is a change team distributed across functions and levels.

It also speaks to change teams who research what customers want, design new processes, redesign preventative maintenance, or rationalize and combine overgrown product platforms. These change teams are often cross-functional and cross-level, joined by anyone with knowledge of the process and skill to make change.

Change teams do the nuts and bolts work of change.

What are change teams?

I saw a variety of different uses of small groups in change efforts. Groups of leaders in leadership training picked changes that they saw needed to be made to achieve the vision.

For example, at Managing People First, the leadership program for the top 2000 people at British Airways during the turnaround I saw groups of leaders redesign passenger loading processes, preventative aircraft maintenance, and travel agent loyalty programs.

General Motor’s Leadership Now was a training program for the top 1000 leaders. There was no formal change team component and yet I saw leaders spontaneously form change teams to rationalize car and truck platforms, and improve the dealer parts delivery process.

In continuous improvement (CI) initiatives, project teams drive improvement. In the best CI initiatives, these teams go through training together and are given direction as to areas that need improvement. Improvements are tracked and verified by the appropriate senior executives.

Successful innovation initiatives include similar directions, but often have a funding mechanism, which operates like a venture capital fund with stages of seed capital, mezzanine financing, etc. This structure allows more freedom at the idea generation stage, but exerts more control as the firm “invests” more in development of the innovation. As a result innovation teams are less temporary, behaving more like mini-start-ups that grow into viable business units over time.

Jon R. Katzenbach and Douglas K Smith in their 1993 Book the Wisdom of Teams differentiate a “real team” from a single leader group. The major differences are that a single leader group has one leader and individual work products whereas a real team has collective work products and a leadership approach that rotates according to the skills needed. In Change, both types are used, but if outcomes are unknown it may be worth the additional time to build a real team.

Working with consultants – the client team and the consultant team

Consultants often ask for a “team” of client resources to help with the change. In my experience, it is rare that consultants are asking for a “real team.” I will admit that even at Katzenbach Partners, where I worked at the beginning of the century, we misused the term. We were often looking for a single leader group. I have seen content or expert consultants ask for a team when what they wanted was two or three administrators to schedule appointments and request data.

At Gemini Consulting, doing large-scale re-engineering projects that would ultimately be managed by the client, I saw a variety of approaches. There were often large client teams that we trained to do the work. Sometimes the consultant was the leader. Sometimes a client was the leader. Rarely was the team a real team mixing both consultant and client resources, but it did happen.

In continuous improvement work, I saw a variety of real team and single leader work groups. I saw both clients and consultants lead. In the real teams, the consultants were often treated as an external resource, to demonstrate a tool.

Integration is the challenge of using groups in change

Groups do the actual work of change. They improve processes, innovate new products and services, and streamline procedures among other important tasks.

The challenge is how to integrate the actions of so many different groups. CEOs and other C-suite executives often assume that everyone is “on the same page.” In my experience that kind of alignment, even among top leadership groups is rare and where it exists it is the product of conscious effort and much discussion.

As a consultant on large-scale change efforts, I often used an integrating structure to keep the project and its change teams “on track.” An example of such a structure is shown below: 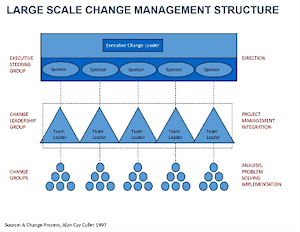 This picture evolved from my work at British Airways and my work as a part of the large re-engineering projects at Gemini Consulting.  There were weekly meetings of each team, vertical groups of leaders, and horizontal team leader meetings.

One of the features of each of these meetings was the two-minute drill, Accomplishments, Challenges, and Help (resources) needed. These were documented, aggregated, and communicated literally up, down, and sideways. It was always cumbersome at first, but alignment and integration were good and any problems in the schedule were visible quickly.

One of the criticisms of Gemini’s work was that we “took over” the client’s organization and monopolized the company resources. The criticism was in some cases justified as consulting stream leads set up single leader groups with them as the leader. If most of the consulting team had such a mindset, the client group members felt “used and abused” and when the project finished the remaining client organization structure was likely to feel disempowered. Adding to the void left was that many Gemini re-engineering projects achieved cost-savings by a RIF (reduction in force) leaving a reduced disempowered group to run new processes.

There were projects that avoided this crisis by effectively building real teams. Stream leads saw themselves as teachers of the methodology and gradually worked themselves out of a job leaving an intact functioning team when they left. Coincidentally these projects tended to emphasize redeploying people from streamlined processes to do other things.  came to see real teams and redeployment as a requirement for effective re-engineering.

The structure you use to manage the change, to align multiple teams’ goals and actions, and to integrate, and communicate priorities, must ultimately shift into the functioning organization.

It seems Bruce Tuckman, who named the four stages of team development, realized this too. In later research he added a fifth stage of team development: Forming ­– Storming ­­– Norming – Performing – Adjourning.  Admittedly this isn’t a perfect rhyme, but it does communicate that change teams do need to plan for transition to steady-state day-to-day operations.

Alan Cullerhttps://wisdomfromunusualplaces.com/
Alan Cay Culler is a writer of stories and songs, his fourth career (aspiring actor, speakers agent, change consultant, storyteller.) He retired after thirty-seven years as a leadership and change consultant. Alan was an executive coach, a leadership team facilitator, trainer, and project manager for innovation and improvement initiatives. Alan’s point of view: "Business is all about people, customers, staff, suppliers, and the community - pay disciplined attention to these people and rewards follow; ignore them and success will not last." Alan is “a seeker of wisdom from unusual places.” He is currently completing three books: Wisdom from Unusual Places, Is Consulting Wisdom an Oxymoron?, and Change Leader? Who me?. Alan earned a BA in Theatre from Centre College, an MBA from the London Business School, and a post-graduate certificate in Organization Development from Columbia University. Alan also builds cigar box guitars and wood sculptures, hikes, travels with his wife Billie, and gets as much grandchildren playtime as he can.

Be Curious: The Leadership Art of Good Questions