Social Values – One of the Best Segmentation Models – Part 2

This Appendix is derived from previous work by Applied Futures. For the values data we want to thank our colleagues and friends Les Higgins and Pat Dade from Cultural Dynamics Strategy & Marketing in the UK. They have taken Applied Futures’ original social values models and have expanded and updated them considerably. They have also applied them to many more countries, including India, China, Southeast Asia, Australia, and Latin America.

In the previous article [2], I described the values model and provided descriptions of how the model works at the individual level. In this article, I describe its use at the macro-level, and how it can be used for a range of purposes.

We can look at the values held by different nations and evaluate the overall tendencies of a particular country based on its values. For cross-country comparison, the three broad groups—Inner Directed (ID), Outer Directed (OD), and Sustenance Driven (SD), derived from Maslow—are most useful (see Figure 3).

The comments that follow are trivial—we could write a book on the cultural differences indicated in Figure 3—but we want to give you a taste. In this picture, we see that the United States is predominantly Inner Directed (50 percent), although it has large numbers of Outer Directed (32 percent). These numbers have reversed over the last decade, despite the recession. It has the smallest number of Sustenance Driven people in the West (18 percent). This combination of values is what gives the United States its outgoing, entrepreneurial characteristics, the desire to succeed, and predominantly capitalist economic system. We place significant emphasis on individualism, and we expect people to be able to make decisions for themselves. We have difficulty understanding people in cultures where the collective is much stronger, such as Russia, the Middle East and Africa, for instance, which are predominantly Sustenance Driven. In some of these countries, there is only “We.” There is no “I” except for the leader, who is likely to be Outer Directed and to wield absolute power. In the UK and some European countries, which have recently seen a resurgence of Sustenance values, we see a combination of both large Inner Directed and Sustenance Driven groups, which tends to create a greater interest in social welfare and socialist systems. (This may be changing with the advent of more populist groups. More recent surveys from around the world suggest that young people, especially in urban areas in Asian countries are predominantly, and excitedly, Outer Directed, while the older populations are still predominantly Sustenance Driven. 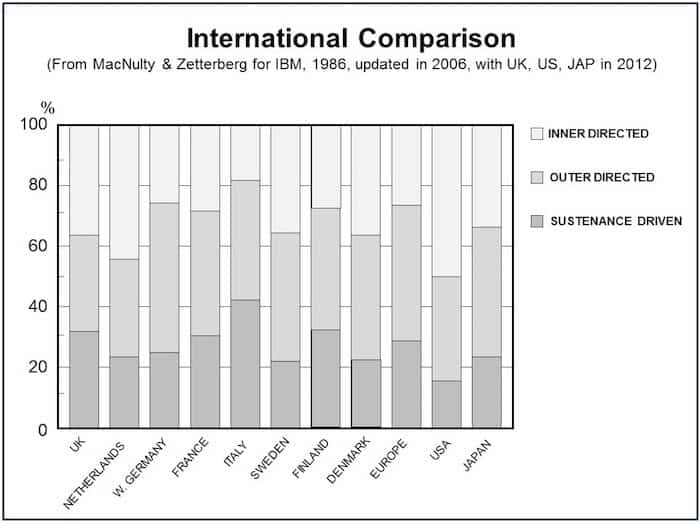 What Can We Do with the Data?

One major area for use of this values information is marketing, advertising, influence, and other communications. Messages that are directed toward values can resonate at a deeper level with people the way messages related to behavior do not, and they last longer. Generally, we have applied our advertising and strategic communications campaigns to promote certain behavior; and values can help significantly with those intentions, although we also need to understand and incorporate the context of the situation as well. However, there is an important element here: People are very reluctant (absent force) to act in opposition to their values. Consequently, understanding values allows us to craft advertising and strategic communications campaigns and even develop products and services that will not be failures because of inherent resistance.

Narratives are stories that pull together aspects of an organization or concept into a context. When developing scenarios for planning and R&D, we put great emphasis on narratives as they help people understand what we are doing and why. If we are developing an understanding of cultures with which we, personally, are not familiar, we will bring in subject matter experts to help us develop descriptive narratives of the people, their ways of life, their cultures and more.

At the very least, knowing the values and the cross-tabulations with attitudinal and behavioral data from the survey, enables us to create narratives about the different target groups, including the media habits of those groups. Those narratives can provide us with an enormous amount of information about what media to use, the content, tone, speed, music, and types of people to be used in developing the message.

Even better narratives can be developed if we can combine all our survey data with the experience of these SMEs who can tell us about a foreign country, and turn them into stories for use in Guided Imagination. For instance, in a workshop on an international aid program, the participants were trying to identify what the local population might need and how the United States might help them. Working with Dr. Claire Metelits, who had lived in the country for some time, we created a narrative that included word pictures of the physical environment. We wanted the participants to use their imaginations, so we guided them across terrain that Claire knew well. She described a walk down a mountainside to a village, stopping for a while at a picnic spot that was a favorite of the locals. She described not only the food that was being cooked, but the pastimes in which the villagers were engaged, including the men dancing. As she described the walk, I asked questions about weather, the countryside, odors, animals, villagers, including children, and villages. By the end of this Guided Imagination narrative, the participants in the workshop had a completely new understanding of what the villagers were like and what their needs were likely to be.

Values are long term, attitudes are medium term, and behavior is short term, as shown in the previous article. If all we have available is behavioral data, then the only forecasting method available to us is some form of extrapolation of that behavior. But behavior is very fickle and can be altered by external events of many kinds. If we want to forecast behavior—of a large population or small group—the most reliable way is to understand the underlying values and motivations, how they are changing, and then anticipate how those changes are likely to play out in behavior. Extrapolating values—especially using the values hierarchy, such as that of Abraham Maslow—is relatively easy. For instance, in the United States, we saw the Inner Directed population increase consistently over the almost 40-year period from the late ‘70s to today (according to data from SRI International, the International Research Institute on Social Change, Cultural Dynamics Strategy & Marketing, and others), while the Sustenance Driven population declined. The Outer Directed population, sandwiched between the other two groups, saw some decline at one time, but increased more recently. Similar patterns were observed for many European countries, although the changes were not quite so marked.

And the results of our Home of the Future project, described in the article “Irresistible Innovation” would not have been possible without the use of values as a basis for developing the scenarios.[3]

We believe that the more people use values as a basis for understanding their products, services, organizations, clients and their business in general, the more successful they will be.

[1] Taken from MacNulty & Woodall: Strategy with Passion: A Leader’s Guide to Exploiting the Future, August 2016