Social Values – One Of The Best Segmentation Models – Part 1

The Value of Values

Values underpin every aspect of society, including its culture, politics, economy, industry, attitudes, consumption, and even the development of technology. Thus, values provide a basis by which to understand the context within which people live and operate in a society. They provide us with a deep understanding of people—as employees, consumers, and other stakeholders—and enable us to communicate with them much more effectively than through any other means.[2]

Values are emotional constructs that underpin attitudes and behavior (see Figure1 below). They are closely related to beliefs, which are convictions that are held to be true by individuals or groups, and they are also related to psychological needs. They are longer term—people generally have them for anything from 10 years to a lifetime, and they change slowly. They underpin attitudes that can be held for 2 to 10 years, while behavior is short term, generally less than two years duration. Beliefs are long-held perceptions that have generally been inculcated from birth by family, teachers, and leaders of the society, although they can and do change slowly over time. In some cases, they may change quickly, generally through some extreme (good or bad) event. Motivations are the factors that compel a person or group to act, and they are functions of values, beliefs, and needs. Understanding motivations help us understand why people do what they do. Behavior tells us what people are doing. If we understand the why, we have a greater chance to anticipate what people are likely to do next.

We have used our values models very successfully for multinational commercial organizations, government institutions, and even for forecasting political changes in various countries for more than 35 years. Our values model is based on Maslow’s Hierarchy of needs,[3] and augmented by the work of Shalom Schwartz,[4] Geert Hofstede,[5] Ron Inglehart,[6] and others.

The objective of our values analysis is to sort any population into subgroups based on their values, beliefs, and motivations. Since values underpin motivations, we focus on the core set of values that might compel or influence a group that holds a particular set of values. We can segment the population according to the different values particular subgroups hold. Using values for this purpose is quite different and provides a much greater depth of analysis than psychographics.

In the West, we use the 21 Schwartz Values Portraits questions, plus 25 that we have developed and tested over the last 35 years. Until recently, for non-Western countries, we have used only the value sets and questions developed by Schwartz, as those have been tested and validated in 74 countries, but we have now added further questions to surveys for other parts of the world. In addition, we add questions on what we call attributes. Our instrument for determining cultural values used to be a face-to-face survey of the population of interest. Although we frequently use online surveys today, we realize we are not getting completely representative samples that way. However, since we are generally interested in younger and better-educated populations that is not a problem. If we need older populations who have less access to the internet, we can return to face-to-face interviews. Along with the values questions, we have questions on decision-making, media usage, ownership/usage of various items, influence/advice, attitudes, and behavior. We then cross-tabulate the values and the typologies we develop with the rest of the questions to provide a very rich picture of the population.

We perform statistical analyses on the results to arrange the responses in a two-dimensional map (see Figure 2 that uses the 21 Schwartz portrait values). When we use the map to display the values of an entire population, the results are neutral. When we put the values of a subgroup onto the map, then we can identify outlier values—what we call “hot” and “cold” buttons—that distinguish each of the subgroups. We use these values as a basis for understanding them and crafting the appropriate messages for the subgroup. Let us look at these subgroups at both micro and macro levels. 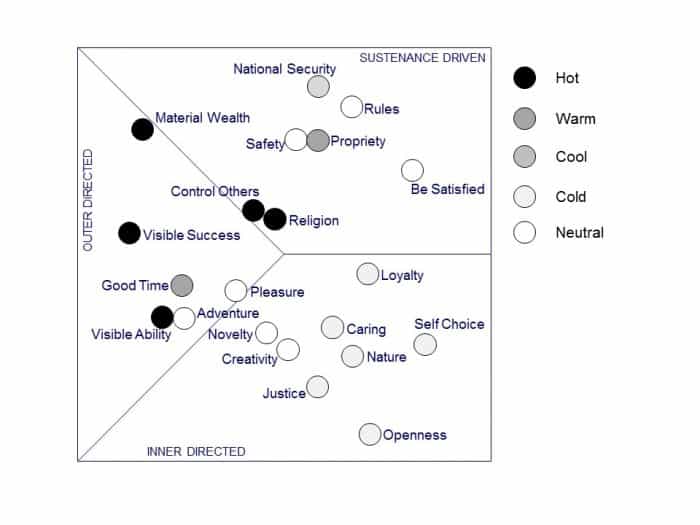 Figure 2: Values Map of One Subgroup

This is the level of individuals and small groups. In general terms, we have identified three broad Value Groups, each of which has a number of subsets. But for our purposes here, the descriptions of the three broad groups is enough.

The Inner-Directed Group is so named because its members derive their sense of personal direction, their personal rewards, and their criteria for success from within themselves. The standards by which Inner Directeds measure themselves and the world tend not to be the materialistic standards of wealth, social class, income, status, or possession, but rather they are standards involving such things as integrity, honesty, quality, and appropriateness to the situation, although when Inner Directeds “go bad” they can be really bad. They love ideas, and much of their conversation reflects this. Although most are not anti-materialistic, they consider people rather than things to be of paramount importance, so they tend to see people in ways that have far greater human significance than the social role of membership in a class or the economic role of producer/consumer.

CONTINUE READING ON PAGE 2 BELOW

The Future Of Education – A Personal Perspective (Part 1)

Is Anomie the Answer?