At Columbia Law, we sat with lawyers who would review our case and see if it was worthy of 501c3 non-profit organization status. The students being guided by the professor were very impressed with us and after a couple of weeks he got the call!

He called me and shared the news and invited me to meet others involved to celebrate.

My wife at the time didn’t want me to go because I hadn’t yet tamed the drug and alcohol behavior and with two toddlers at home, she was worried that I would get stupid at a party… and she was probably correct.

Three days after that call I received a call that he was gone…his mother found him on the couch non responsive and at 29 he left the world. Devastated and in shock, I was lost…for a moment and then gathered what was left of me and put all efforts I could into being a part of an organization I had no experience to run as vice president with the will and determination to see our dream through. His words echoed in my mind that if I helped him build the MOGA the MOGA would help me with all the ideas and projects that I was working on, and I kept going.

Still, the drugs and alcohol were impeding my progress and I did my best as the role of Husband, Father, painter, refinisher, restorer, contractor, writer, artist, and Vice President to manage everything but saw that I was sacrificing my family to achieve my dreams.

The Board Of Directors spanned from NY to Austin TX to LA and getting everyone together on a conference call at times was like pulling teeth let alone agreeing on what was the best way to move forward. I eventually reorganized the board, became President, and had collaborations with other organizations doing creative projects throughout NYC and QUEENS. Our website was getting around a thousand visitors a day and we were linking to famous artists and everything looked like it was coming together.

Our third baby arrived a healthy ten-finger ten toes baby girl that at one point because of a test done prematurely was told may have down syndrome and her mother was seriously questioning whether to abort or not and just that thought left me heartbroken.

I used to go to school in a mental institution and anyone with a so-called ailment or syndrome I never saw that way and are some of the most amazing souls I ever had come in contact with. She is now 11 and first in her class in sports and education by her own choice! Her two older brothers are also doing well in sports and academia!

After she arrived I took time off from the organization and focused on family and the board of directors were also experiencing things like paying rent bills and working for free was a challenge. I would tell them “When we show the world what we are willing to do for the love of the arts and they see our passion for what we do, not because we are getting paid… the doors will open and opportunities will come! MOGA is the platform where people can see what you are capable of doing!”

None of us had a salary and I wasn’t so great at getting donations and really had no clue on how to run an organization or business for that matter but with faith and steady efforts like everything else I did in life, it will come together with a bit of effort.

So I thought…the months passed and the members of the board were all waiting on me and this statement that another President of a nonprofit organization was echoing in my mind “They only show up for the wine and cheese” going rogue and making decisions without the board and feeling a bit discouraged of the lack of effort from the other board members and effects this was all having on my family I decided to resign and focus on my trade to support the family.

Started writing graffiti at 8 years old and many years later became a union painter for about 6 months, not happy with the structure and the politics of creating my own schedule doing projects with multi-millionaires on beautiful townhouses and apartments throughout NYC and the tri-state area. I was asked to refinish the front doors of the Pope’s Private Residence when he came to NYC in 2016.

We moved from Ridgewood to Glendale to Maspeth Queens and finally to our own little house near North Salem and now renting a piece of land with more than 58 acres and 131 acres next door nature preserve and hundreds of acres more surrounding lands of forest and lakes, streams and wetlands. Farming Chickens and writing novels while walking around barefoot in everyday life has been great for me!

A recurring dream when I was younger of an adventurous ride on a rollercoaster of sorts through all kinds of terrain and up hills and valleys, tunnels and caves to where I am now a small frame of a house stood and the ride came to a stop. Last year I looked at the house and the dream flashed and I knew I was exactly where I was intended to be and forever grateful for the ability to heal from the early childhood traumas, make peace with everything and acknowledge just how blessed I am to still be alive and living.

From an invitation to a Facebook Group that I was reluctant at first to join There is someone who is sharing things that no one else could explain to me all these years of searching that has raised my awareness and confirmed what no one else that I had previously come into contact with could. The war is over. Keeping the Ego in check is a steady and continuous effort at the gate to listen and observe and take out the TRASH!

I am close to being out of the water and through my many efforts and help that I have been receiving as well as guidance to live in abundance, stay in honor, settle all matters and return to the truth, there is a vision of a place that has been steadily coming to Me in my imagination and a recent trip with a Maestro I see a blueprint of a place we can build that I wish to share with you all!

The technology that is being constantly developed and the discoveries we are making are incredible! As it becomes available to the public, together we can build something for the future generations of our world now in a place of creativity and imagination to build skills, live in accordance with universal law and nature, master trades, and achieve things that we once thought were impossible and be free to govern ourSelves!

By this and our love for all things, we will transform this world overnight, and at the top of the morning the sun will shine and we will move on to the next era of being!

In harmony with the great symphony of this universe we will tune in and the way will guide us all back home!

Thank you for taking the moment to read and share your energy.

With love and gratitude, 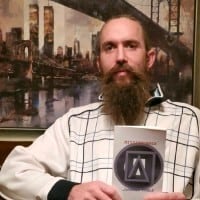 Jonathan Fable
Jonathan Fable grew up in Ridgewood Queens getting involved with drugs and crime at a very young age. He excelled in his classroom when he was present but chose to run away and experience life on the street. His guides were showing him a path that he thought was cool to him but as the years passed they ended up departing the world young or ending up in prison cells. First arrested at 9 years old and going through the system he was discharged at 15 years old to a phone call that someone he looked up to and loved that saved his life from getting clipped by the J train coming outta Sutphin tunnel had just been shot. After many near-death experiences and encounters with those who wished to take his life, he decided that the path he was on would lead to more harm than a better life.  He met someone who showed him the way and cleared his mind and practice his life changed for the better. Living abroad on an island with a very small population he was shown the old ways and became aware of his family history. Seeing the beauty of family he imagined the wife and mother of the kids he eventually would help bring into the world to love guide and protect had come to fruition. He started writing his life story around the time he met his wife and his Ego ran with information that he didn't fully comprehend but sounded pretty smart regurgitating. The idea of a museum of GRAFFITI Art 501c3 was shared with him by an old friend from the block as all the pieces were coming together for his dream to share his story and inspire the ones around him from his life. He put his project on hold and made an agreement with his brother to help build the MOGA! His brother shared that the MOGA would fund his own creations and also help the community that he rose up and out of. Creating opportunities and sharing guidance for the lovers of graffiti and hip-hop to be self-sufficient and create a great life! At the time of this opportunity, he was a father to 2 toddlers and a baby girl on the way. His plate was full and he rose to the challenge through his knowledge of painting, carpentry, and restoration he continued to improve his life. Also amidst this doing his best to overcome childhood trauma, tragedies and addiction he muscled his way through and published after many years of dreaming to now bring his dreams to reality. A story where his brother never departed the world and the museum of GRAFFITI Art transformed into the MEGASTRUCTURE OUTLINED IN GRAPHENE ARMOR where many omnipotent gods aligned at the moment of great awakening!

Where Do We Go From Here?

360 Degrees to Any and All Situations