Change Teams: Dysfunctions –What to Do When it’s Not Working?

Seduction (Part 2): Mae West – They Call Her the “Subversive Agitator”

Recently I watched a documentary about the legendary Mae West and was surprised to realize she was such a visionary…Far ahead of her time.

Seduction and the Modern Woman (Part 1)

Even though I am a big fan of old-Hollywood movies, film noirs, and the classics; truth be told, I have never watched a Mae West film in its entirety.  Nonetheless, I am now sold as a fan of how well she was able to adapt and overcome any obstacle thrown her way. She had street smarts and ability …. Which is a powerful combination and one of the things that gave her that edge.

Everyone can take a little bit of Mae West and put it into themselves so you will be even more confident, self-assured, determined, and optimistic. These traits are what you need when the road gets tough and you need to get going. These are the traits you need when people say no to your ideas or tell you are crazy for having them… or that people will never buy your product or service because it’s too risque.

Mae West was a visionary seeing far past her time in the 1930s & 1940s Hollywood. At that time, women were not paid equal to men in the film business (*similar to today*), but that did not stop Mae West from reaching for the stars. She is said to have had a meeting with the owner of a movie studio who wanted to offer her a big contract and during the negotiations, she knew what she wanted. She told him she wanted to be a writer on the movie, do the costumes, as well as get a piece of the all-mighty box office money… *unheard of for pretty much anyone at that time, let alone a woman to ask for such a thing*…. Yet because the studio was practically on the verge of bankruptcy, they knew they had a star in front of them and had to give her what she wanted. They agreed to her terms.

When asked what her compensation would be, she replied to the owner of the studio, “how much money do you make?”  He told her the amount. She came back with, “I’ll take that amount plus ONE DOLLAR MORE.”  And they GAVE IT TO HER gladly.

And just like that, she was now more in control than ever with her career.  Boy- did she make the most of it…. She gave herself permission to be bold, strong, and manipulate men; she was a parody of the sex siren. She played marriage her way. She was often the more aggressive to her male leading men who usually played the more naive character.

She is quoted as saying, “I wrote the story myself. It’s a girl who lost her reputation and never missed it.”

During her career, she would fall in and out of style with her audience which primarily was men when she started, but as time went on, she knew she also had to capture the hearts of women who had often seen her as sinful or amoral. She adapted yet again and before too long women fell in love with her as well being seen as a bold character to their mundane lives.

One of her fallouts came when she put a drag queen in her show she was producing on Broadway.  She felt comfortable in this space and of course, wanted to push the envelope once again. The show was raided by the police before it began and West was thrown in jail for obscenity charges.

She spent 8 days in jail waiting for her trial.  While she was in jail, she used the time to get more publicity for the Broadway show. On the way into the trial, she said, “I expect this will be the making of me.”  She wasn’t wrong.

Mae West didn’t do the typical things women of her era did, rather, she enjoyed going to boxing fights and hanging around muscular men.  She said, “ Men are my kind of people,” and that (she) “has no time for women. Their lives are different from mine.”

She died at 87 years young, no doubt with some hunky, muscle man nearby.  She left us as a Role-Model for what true SELF-CONFIDENCE LOOKS LIKE…. And all of us can use more of that in our lives.  So go ahead and sprinkle yourselves with a little bit of BADASS courtesy of Mae West…How can you add a little Mae West to your life? 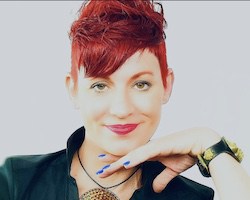 Melissa Van Oss
Melissa Van Oss is a MidWest transplant to Washington, D.C. She embraced city life becoming involved in a private underground world that few see inside of, she pushed past her own fears, insecurities, and barriers, and came out the other side transformed into a confident, adventurous spirit… she awoke her aura of Seduction. Melissa is a three-time bestselling author, speaker, human relations strategist, and scholar. She is the author of the Seduction as a Second Language Series. Melissa uses her experiences in the world of Seduction to help others understand Seduction As A Second Language and how it translates into more confidence from the bedroom to the boardroom. When viewed as an intellectual pursuit, understanding Seduction will lead you down a path toward personal transformation, evolution, and higher consciousness. There is a difference between social Seduction and seducing someone in our personal relationships, Melissa shares how to tell the difference between them and how to use them to your advantage. Melissa has been interviewed for Life Altering Experiences on Roku TV as well as being featured in The Hollywood Times. She has also been a guest on the podcasts - “What Every Business Needs to Know Right Now,” “Analytical Chaos,” and “The Guy Who Knows a Guy.” She also recently spoke at the Monetize Your Matter Summit. She works with individuals, high-level executives, entrepreneurs, as well as former professional athletes. Melissa has collaborated on the creation of several live events and spoken at numerous workshops. The Indie film in which Melissa was a consultant won numerous awards as well. Van Oss attended Kent State University, where she graduated with honors with a Bachelor of Science degree. She currently lives in Washington, D.C.