The soul of man requires both spiritual exercise and spiritual nourishment.

At one stage, man learned that prayer could not coerce the gods, so he made it a form of favor-seeking verbalized wishes- petitions – expression of sincere desires – monologues – techniques of achieving spirit co-operation. Soon, came the inclusivity of ceremonies involving the whole clan or tribe, and finally prayers led religion to assist in the conservation of all worthwhile values. It’s much later when the concepts of ghosts and spirits evolved, that these petitions (verbalized appeals) became superhuman in address.

From times immemorial, praying was part of many ancient tribes – the mana practices of the Melanesians, the Oudh beliefs of the African Pygmies, and the manitou superstitions of the North American Indians – Sentinelese Tribe of North Sentinel – Asaro Tribe, Papua New Guinea – all of them praying to – local gods – to fetishes, amulets, ghosts, rulers, and to ordinary people.

But prayers offered are so personal though?

To some it can be the calmest expression of gratitude; an ecstatic expression of praise; devotion (obligation); a silent expression of God-consciousness, bringing a wider spiritual vision, higher consciousness, greater tolerance, and understanding, making them humble in the realization that we are but a speck in the universe. Yet to others it can be a meaningless recitation of theological formulas, or even the feverish veneration of a fear-ridden mortal uttering undisguised shouting of pious phrases.

The grace of God means something like: Here is your life. You might never have been, but you are because the party wouldn’t have been complete without you.

Grace, also like water flows to the lowest part, and a seeker like me (who grew up in a non-religious family with hardly any in-depth conversations on divine interpretations of the cosmos), found herself thrown in the company of many enlightened masters, who offered torrents of mesmerizing understanding of the divine aspects of the “Parabrahman” (the supreme self), “Sagun”(the one with attributes), and “Nirgun”(without any attributes) – both describing “Sakaar” (God with form) and “Nirakaar” (God without form). My diaphanous spirit’s curiosity for eternal interpretation of the Devas and Devi’s of Indian mythology, was somewhat quenched.

Now, many scriptures say, that, since we humans identify with our bodies form, it’s easier to worship when we attribute a body to the lord. Only when our practice becomes deeper, and start waking on the path of ascension and evolution, can we start worshipping his formless “Nirgun” self (He is considered birthless, deathless, timeless, faceless, divine, found in elements of earth, in human goodness, in the love within us). In fact, we “are” love. We ourselves are the eternal “COSMIC SOUL”, and the divine consciousness!

So, the seeker I am, some days cosmic stamina pervades, and I sit in a state of “dhyaanam”, (Meditation), little lines of wonderment furrowed in my brow, as I feel the benevolence of Waheguru (Lord in Punjabi). My momentary self-forgetfulness invigorates my senses, arousing me to an undeniable faith, a childlike humble plea for forgiveness escaping my lips, uttering aloud a joyous divine praise. I blush like a bride being caressed by her lover, as my soul and internal divine alter ego, entwine themselves around the unabashed and liberating “surrender!

Other days, I feel caught amidst a storm – a struggling branch of an immobile tree held in earth’s deep embrace in velvet-black night, my frenzied breath waiting for the weeping winds to die, and the morning twilight to turn my inner landscape ablaze with golden rays, showing me the long and windy road to “Moksha” (liberation from worldly illusionary veil of Maya). I patiently and silently breathe….and watch my own shadow being played on by wind, sun, and shade, my soul immersed in itself, awaiting with longing for a wonder, a miraculous re-union, while a genuine dialogue carries on between him and me, me and me, echoes of “Oms” deflected back at me.

If, however, you are a non-believer, believing in the things believers do not believe in – stay with your merciful, benevolent and gracious Heart, your humane-ness, and you are good too.

But if you believe in your spiritual potential…I wish for the divinity inside you to instill faith, confident expectation, peace of mind, cheerfulness, calmness, courage, self-mastery, and fair-mindedness! 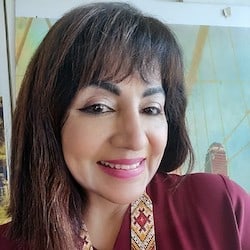 Minnku Buttarhttps://thecircleofjoy.com/
Award-winning Transformational Facilitator and Energy Healer for Professionals wanting to re-claim Joy, embrace their awesomeness and Full potentials at work and relationships. Helping you show up in your Fearless, Authentic, and Significant self to Shine your light in the greatest way! Other Roles; Moderator: International Radio channels/ Panel discussions; Founder Director: - “Circle of Joy" (Platform for Masterclasses & Retreats - Rewilding with Nature); State President - Karnataka Lifestyle & Fitness Improvement Council, WICCI, Women’s Indian Chamber of Commerce and Industry; Director/ Designer: Minkse Fashion Label. On a passionate mission to help people re-introduce Joy in their lives through reflecting and finding solutions for the un-needed storms in their lives. My tutelage under various enlightened Masters, working with numerous energy modalities (Pranic and Tibetan Bowl healing, Phyllis Krystal’s Cutting the Ties that bind), imbibing the learnings from living in nine countries amongst innumerable nationalities, extensive travel opportunities to the most exotic destinations in the world, has brought me to the conclusion that: Our Divine path needs to be a deep dive work that becomes from being “Unconsciously Incompetent to Unconsciously Competent”- AT ALL TIMES – just like breathing air! My mantra: WHAT THE CATERPILLAR Calls the END…. the rest of the world calls a BUTTERFLY, so Dare to show up in your Vulnerable Authentic self anyway!