I was fortunate to be able to see the “Great Conjunction” in the early evening on December 20, 2020, when a neighbor brought out his professional-grade telescope and shared a look at what appeared to be Jupiter and Saturn merging in the sky. I had heard about the planetary event that occurs about once every 20 years, but I didn’t expect to be able to observe the two planets, with a crisp view of Saturn’s rings, for myself.

While the celestial occurrence was exciting to behold, another event that same week involving a different Saturn and its departure was occupying my mind.

I had decided to donate my 15-year-old Saturn Vue to support a local charity, and the transfer would take place in a few days. It’s hard to believe, but I bought my first Saturn 28 years ago. I had just graduated from college and needed a reliable car to get me to my first professional job. I thought I would buy a used car, but my sister convinced me to visit the local Saturn dealership. She had researched Saturns, which first came on the scene in 1990 (https://www.company-histories.com/Saturn-Corporation-Company-History.html).

I ended up going once, then twice, and then a third time. I liked the look and the price of the SL1 sedan, and it was available in a beautiful, medium blue color. A unique feature of the first Saturn models caught my attention – their “plastic” doors and panels that made them resistant to dents. I was also happy to learn that the Saturn Corporation began as an employee-owned subsidiary of General Motors. I still recall the feeling of excitement and, well, giddiness when I signed all of the paperwork and held the keys to my new Saturn in my hand. I was now a proud member of the “Saturn Owners Club”.

A week or two after my purchase, I received a card in the mail addressed from the Saturn manufacturing plant in Spring Hill, TN. A hand-written note inside the card was from a Saturn technician involved in building my SL1. In a long paragraph, the technician thanked me for my purchase and expressed hope that the Saturn was “one of the smartest decisions” I ever made. I have to agree, all these years later, that it was.

I remember the experience in those early days of spotting Saturns everywhere when I was driving. Other Saturn drivers would give a friendly honk or wave, knowing that we were both in the “Club”. Homecoming events even took place at the Saturn plant in Tennessee (https://www.chicagotribune.com/news/ct-xpm-1994-06-28-9406280064-story.html) and across the United States. It was a fun time, knowing that I was driving a unique make of car from a “different kind of car company” (https://en.wikipedia.org/wiki/Saturn_Corporation).

Within a few years after I had bought the SL1, three of my siblings also bought Saturns. We lined them up in front of the house we all grew up in and took a family photo.

My life with the SL1 included a drive to and from the west coast for a summer internship and another trip a few states south for a career change. I also survived an accident on I-70 where another car almost veered into me, causing me to swerve around a few times and end up in the embankment. Leaving the scene with only a bruise from the seatbelt made my loyalty to Saturns that much deeper.

After 13 years, the SL1 started to show its age. It was time to look for a new car, but I had no desire to look at other makes. Saturn had introduced an SUV, the Vue, in 2002. I made the upgrade in 2005, and the Vue came in the same beautiful blue as my SL1. I was thrilled to own another Saturn and remain in the “Club”. The Vue was just the right height for me, and its large front, side, and rear windows offered terrific visibility.

It served my commuting needs quite well, requiring only typical maintenance issues. During what would end up being its last routine checkup, however, a repair that would likely be an astronomical cost made me decide to replace the Vue. This time, I had to look into another “universe” of car makes for my next vehicle. I did keep one of the side panel logos with the Saturn name and rings, though. It will serve as a memento and a reminder that I can always look up at the night sky and see the inspiration for the means of transport that helped propel part of my life’s journey. 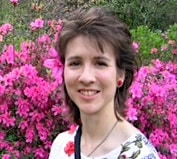 J.M. Pridotkas
J. M. Pridotkas is semi-retired from a career in engineering and teaches French and Chess to homeschool students. She is a lifelong Catholic and helped form a writers group at her church. She has published an article based on her Master's thesis and an article on COVID and prayer; After This Our Exile. She presented an abstract at the 7th Annual Symposium for Advancing the New Evangelization at Benedictine College, “Humanae Vitae 50 Years Later: A Call to Self-Gift.” and is currently working on a variety of writing projects. When faced with doubts about her endeavors, she is encouraged by a quote from Fr. Richard Neuhaus: “If you want to write, then write” (ref. “Write Away”, Randy Boyagoda).