REWARDS – What Do I Get?

In our serialisation of my book “Punk Rock People Management”, we continue with a piece about the vexed HR question of Rewards and Recognition.  Punk Rock Events are available on a worldwide basis based on a heady mix of HR strategy and on the ground practice, contrasting the good, bad and ugly of HR.

Classical HR says you use an unemotional set of exchange tokens to get performance from people.  Simply stated, we’re talking money, money, money.  Had HR studied their social science theory more carefully, they would uncover the truth about rewards and recognition.

Maslow offered us his hierarchy of needs.  He said that rewards and recognition should take account of ‘where people are at’, rather than attempting to apply a ‘one size fits all’ approach.  Critics of Maslow point out that his hierarchy is too simple, and that he never dealt with money in his study.  Having travelled widely, one can sometimes see examples of the inverted Maslow triangle with people placing more value on a widescreen TV than having shoes on their feet.  Nonetheless, Maslow’s principle remains a good one if you want a rough guide as to where people are at in their cycle of needs.

A classic case of getting Maslow’s triangle wrong occurred when a subsidiary of the Munich Reinsurance group rewarded its top executives by giving them an evening in a brothel.  This was completely inappropriate, crass and also divisive, as women were excluded.

Maslow would have advised that senior people are motivated by self-actualisation rather than “basic instincts”.  Worse still, someone blew the whistle and their dirty secret was exposed for all to scrutinise.  Hopefully, the HR department will suggest a visit to a monastery next time, to compensate for their “premature evaluation” of the reward options and consider their values through reflective practice.

“Money don’t satisfy but it sho’ ‘nuff pays for the search” – wise words from Prince, based on the wiser research of Frederick Herzberg on the so-called ‘satisfiers’ and ‘dissatisfiers’.  Basically, the things that produce long term satisfaction differ from those that are required just to prevent dissatisfaction.  Money is a dissatisfier – double people’s salary and they don’t necessarily work twice as hard for twice as long.  First direct, an online banking subsidiary of HSBC understands this very well, as do Virgin. 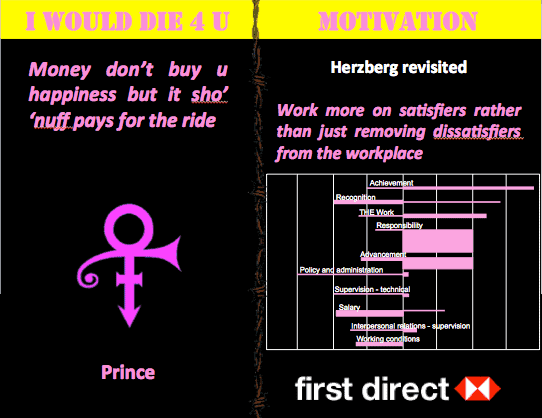 More recently, the US HR guru Daniel Pink came out with the insight that, if you reward behaviour, you get more of that behaviour, especially where profit meets purpose.  More surprisingly, he said that if you punish behaviour you get less of that behaviour.  We only have to look at the risk-taking of banks to generally agree with Pink’s first point, but the second is not always as obvious as the headline would suggest.  A study of child psychology would point out that punishment for some kids acknowledges bad behaviour.  If you really want to change a child’s behaviour, then you must ‘extinguish’ the behaviour by ignoring it and making sure that the child gets no social approval from others in their circle.  Adults are just big kids in many respects …  So, sometimes, punishments are wrong because they perversely reward the perpetrator.  The wise leader always looks at the individual circumstances.

I am presently engaged in writing the sequel, entitled “The Great HR Swindle”.  You might like to join me in writing the text for these in a global crowdsourced collaboration for reforming the HR paradigm for good …

How Do We Want to Be Remembered?