Repurpose the Past into Our Present

We’re older now, my favourite cousin and I: she in her mid-seventies, I in my late sixties. We are loyal and fun, devoted to the friends and family we possess and to the greater world. My cousin had been active in the union and made a lifelong friend who was in the terminal stages of lower region cancer – liver, and intestine complications that caused the doctors to let her know – more than once, that she had mere weeks to live. And then she would pull a “miracle” out of somewhere and so the years progressed. Forward and backwards like a waltz. Once a year, to celebrate her friend’s birthday, my cousin would travel from the west coast of Canada to the prairies where her friend, and I happened to live. And so it was I would capture treasured visits of laughter, stories, and a shared depths/perceptions of our lives. Made a new friend along the way.

Time passed and so did my mother, one of those visits. I arrived for our visit with a lovely old ‘Golden Imperial’ Topaz ring that my mom had bequeathed me. That ring had been given to her by her best friend, my godmother, an extraordinary combination of wisdom, musicality, laughter, grace, and altruism, a guardian of dreams. As I grew up, I watched my mother’s hands as she wore that ring, in all settings – at the barn mucking out and riding her beloved horses, or all dressed up to greet Queen Elizabeth at a social event in our small prairie city, Regina, Saskatchewan. Topaz – signifies wisdom – truth dipped in compassion. It was the one thing I had wanted from all my mom’s possessions. She granted my wish. Bless her socks!

A couple of times. I felt the hold I had upon the ring and what it ‘meant’ to me loosen.

My cousin had admired it too, her whole life. We are candid with each other, and she let me know that more than anything she wanted that ring. I listened, and yet… Before I left to go back to the nearby city I lived in, after our visit, I went to the washroom, and sat quietly. “Could I give this ring to my cousin? I make a practice of letting go of attachments in my life. Could I let go of this ring? Nope. Fair enough.” However, I continued the discussion by gently removing the ring from my right hand and placing it on my left hand. Back and forth. A couple of times. I felt the hold I had upon the ring and what it ‘meant’ to me loosen. Then I washed my hands, replaced it on my right ring finger, and returned to say goodbye to these two extraordinary friends. I promised to return the next weekend to catch a last little visit. As I hugged my cousin, I stopped and said” I cannot give you this ring, and yet I believe I can let you wear it for the next week and get it all charged up with the stories the two of you will share”. We both lit up inside.

I walked into the story of my next week, lighter, fueled by the energy generated by repurposing my ownership of my mom’s ring. A week later, when we visited, I let her know that although I couldn’t give her that ring, she could borrow it for a year and return it when she came back to visit our friend in May for her birthday. It was a ‘presence of mind’ promise – I’m willing to bet you’ll still be alive my new friend, and I know, my cousin will be here, and that “Lady Topaz” can drink in the power of the Pacific Ocean.

During that year, I acted upon a newly hatched dream, to become a life coach, and stayed with my cousin on the coast during part of my training. I loved seeing her wearing “Lady Topaz” on her hand as again, we shared stories, love, laughter, and our ongoing devotion to growth and change. Candidly she asked if I wanted the ring back. ‘Yes”, I countered immediately “and yet not now, the year’s not up! Hello, I am delighting in being in both of your company. Let’s enjoy the richness of this story of our present lives together.”

A hearty story needs protagonists, folks who push forward or back at the conditions/beliefs that surround them.

It made for a hearty story. A hearty story needs protagonists, folks who push forward or back at the conditions/beliefs that surround them. I do not stand apart from death. I know I am not permanent here. And so, I enjoyed the thrill of possessing such a meaningful thing and letting it go, sharing it. Even leaving the province without it, for a freaking year! Six months later I thoroughly enjoyed placing it upon my hand again. A year after that, during the birthday visit our beloved friend did die and we were together to hold space for each other and her community of friends and family.

I have repurposed what I hold goals to be. For me now, goals are three things – What we want to be, do, and have. Fair enough. They are also who we want to share that/our journey with. Finally, what do we want to be doing when we get there!

Speaking of protagonists, leadership, and joy, one of my many delights is that I do not travel alone – many thanks to the many great-hearted leaders who may read this. Thanks for all you be and do, you make a difference for the greater good of all. In the words of a new storytelling friend, (Joseph Carrabis) “Today, we will let magnificent things happen.” 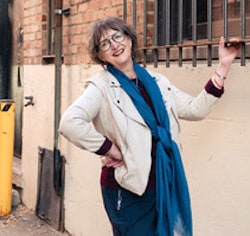 Susan Sneathhttps://www.bluewindcoaching.com/
I'm a Story-Architect, Whole-Life Coach, and Performer who has spent over 20 years helping people bring their visions and stories to life. In all of my work, I fuse personal development theory, acting techniques, and a sprinkle of mindfulness. I love meeting people where they're at and helping to create a safe space to play with what life's thrown them. I collaborate with: Leaders of all shapes, ages, and sizes; creatives – artists, and those who make an ‘art of life’. Folks who watch things happen, folks who make things happen, folks who wonder what happened? The most important thing – Your faculty of perception changes everything. Be patient with the process. What truth do you need to hear, to understand, to be willing to change? My lived philosophy: Listen, do, and then use what you know in as many ways as you can imagine. It’s over six months now since I moved from the boardroom to the production studio, where I co-host a TV Talk Show “The Change Zone” with my friend Gail McDonald. We help people “On Purpose!” bring stories of their Leadership Presence and Visions to Life/Community. changezonetalk.com. Spotify, Apple, and iHeart Radio, Building the community that embodies change, one conversation, one story at a time. Everyone is welcome in The Change Zone.