Wow, I cannot believe I just wrote that headline!  You are probably wondering whether this article will be as long as “The Wealth of Nations” or “War and Peace”?  Relax! I am always brief, but my aim is to get you thinking and talking – maybe you can write the rest of the book in the comments haha ….  So, where do we go from here? 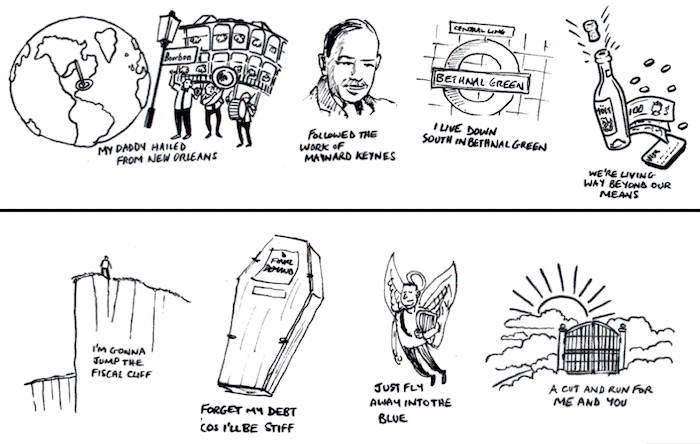 A brief history of capitalism

We have not moved from hunter-gatherers in a certain sense.  Whereas at first we hunted animals, now we hunt information in the 4th Industrial Age … As we became more efficient at hunter-gathering the agrarian economy began, otherwise known as farming. As people began to grow more crops than they needed, the idea of trade was born and, with it, the exchange token we call money. With the gradual development of transport, we were able to trade globally and make profits from our labour. Some people did much better than others and started to live in much bigger houses. Others thought this unfair and thus was born the “haves” versus the “have-nots”. In recent times, the gap between rich and poor has far exceeded that suggested by the Greek philosophers. With this has come feelings of being left behind. This helps in part to explain the various uprisings of populism around the world, although these also are not without some equally questionable ideologies. In the immortal words of Prince:

“Dirty fat banker sold a house today
Sold at auction wants the family out the way
Kick them on the street, cause he couldn’t pay the tax
Call it an act of God”

We lurch between capitalism and communism, left or right, zero or one, plus or minus, like or dislike, good or bad, black or white, public or private in a repetitive bipolar digital carousel. As we enter the machine age, the digitisation of everything is likely to become increasingly troublesome for all. We need analog thinking to combat digital obsessions.

Reforming capitalism and the Fiscal Cliff

In my latest book “Brain Based Enterprises”, I set out a new standard for capitalism:

Questions for Capitalism in the 21st Century

How much profit do you make?

What do you do with it?

Speaking personally, I’d much rather drink tea with Richard Branson, who balances Passion, Purpose, and Profit, than Rupert Murdoch. How then did capitalism overstretch its safe design limits? A pivotal moment in the history of capitalism was the 1970’s tipping point for MBA’s when Milton Friedman wrote his article in The New York Times. He stated that the primary role of a business was to make money for its shareholders. This was followed by Agency Theory in 1976 which completed the volte-face from the more humanistic outlook on the purpose of businesses.

It’s time we remembered our history to find ourselves again.

Managerialism has subsequently informed the last 40 years of corporate development in many business schools. Charles Handy, Tom Peters and I are united in our disagreement with Milton Friedman et al. If you look after the people, the profits look after themselves. This is akin to what is now viewed in some circles as the “quaint” outlook of Quaker-based companies such as Cadbury, Pilkington, Virgin, Johnson & Johnson, companies like Merck who stated: “Do good work and the profits will come”. It also echoes my own experience working at the “Bruce Wayne” inspired philanthropic pharmaceutical company The Wellcome Foundation, teaching ethical inspired MBA’s for the Open University in the UK and, more recently, for Sir Richard Branson’s Virgin Group. It’s time we remembered our history to find ourselves again. My experience at working for Wellcome have underlined the imperative that capitalism needs reform to a point where we balance Passion, Purpose, and Profit.

What do you do when you are driven by a compelling idea?  Start a business? Write a rock song? I did both but I will turn to the song. “Fiscal Cliff” started out as a reaction to the 2008 recession. The song storyline runs something like this … a banker looks out across the city skyline.  He realises he is financially rich but emotionally bankrupt so he decides to end it all by jumping off the “Fiscal Cliff” … the song is deeply ironic as you will see.

One Sunday morning, my wife and I were talking about the song in bed. We realised that suicide was not a radio-friendly concept unless you are Radiohead or Pink Floyd fan!  So we needed a transformation in the song so that it had a happy ending.  Who better to invoke in that transformation than “The Management Consultant formerly known as God”?  I will leave you to find out how the story unfolds by watching the film. We recorded the song and made the film in one day from a standing start with a band who had never played together before whom I had hired from a Facebook post …

Although Fiscal Cliff is a deeply ironic rock song, it points to the vacuum between aspiration and perspiration, which seems to be the zeitgeist of our age. Capitalism needs reform for a world in which we must learn to generate SCA or “Sustainable Co-opetive Advantage”.  I merged the word collaborate and compete to describe the kinds of behaviours that will be good for us as individuals, good for our lives and work and good for the planet in terms of recognising that “we are all in this together”. This will require fundamental shifts in ownership, how we are rewarded and so on, all discussed in “Brain Based Enterprises” and I’d welcome your thoughts on this.