I have always found reflections in rivers fascinating.  Favorite walks alongside the River Itchen; sun shining, glistening water, faint scent of natural elements, sights, sounds of Nature.  From gazing upwards, gradually lowering and resting my eyes on the river surface.

A distinct contrast to the magnificence of treetops reaching for the sky through clouds and ultimately blue skies, reflections in rivers present another dimension; almost a fourth dimension.

Regenerating standard interpretations for a world perceived deep as the Universe itself. Infinity. But infinity through and beyond a river. As ‘deep’ as an imaginary Universe? 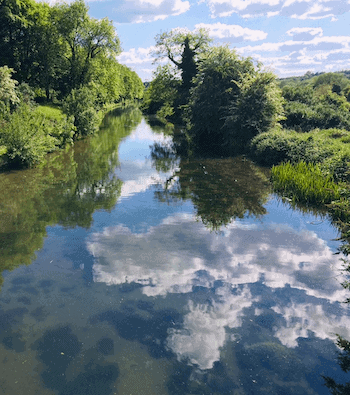 Look‎ closely at the photo, allowing the spirit of imagination to free itself. Transport yourself to the River Itchen and witness depths of fantasy.

In parallel with this photographic image of reality, allow fantasy and freedom of imagination inviting visual senses to create a world beyond normal perception. Forget the surface; gaze down towards the depths of clear water. Depth of time itself.

Fluffy white clouds against a blue sky and beyond, even further down, outer space; Planet Earth. Patterns of land, and oceans as if viewed from an airliner.

Looking ‘down’ from above the clouds, blue sky permitting a clear view, the heart takes over, rigidity of standard perception left behind,

Imagination reverses normality as we look down through the clouds at a globe.

Should we not be looking up at the sky and clouds?

A maze of perception and deception’; there ends the dream-like state in which we have flown. Cloud-9?