Reflections: A Walk on the Bright Side

Winter months can cause people to feel low; sometimes depressed. There is a clinical reason; that being the lack of sunlight. Sunshine is a benefit, not just to keep us warm, but feeding the body with what could be interpreted as positive vibes. In fact endorphins; generated by a smile, positivity; more easily available during Spring or summer.  Or a smile generated by witnessing seasonal waves offered by Nature’s generosity. 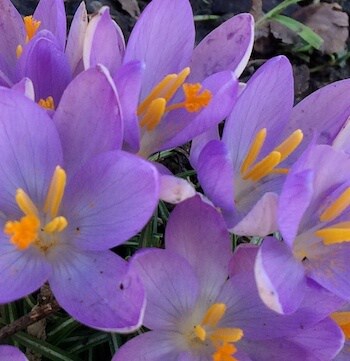 Any time of the year can bring on a smile, be it a squirrel racing after a fellow squirrel up a tree, robins daring to sit on a twig close to a pathway as if examining a human onlooker. Robins must be the most naturally tame, ‘untrained’ birds‎.

Once when sitting on a park bench during a leafy walk, a robin actually sat on my shoulder. Whether this delightful robin red-breast‎ wished to say something in my ear, I have no idea, but this lovely bird must have at least been curious, or brave; not that it was in any danger.

In some rural areas where cafés serve scones, ‘clotted cream’ (sounds horrible, but it is thick cream)  and strawberry preserve, sometimes a robin will arrive at a table; imperious as if signaling a waiter,  asking, awfully politely of course, whether it could have some scone. How could one refuse!

Scones, cream and strawberry conserve are my all-time favorites. Not really a desert, but to be enjoyed anytime; which is a splendid luxury.‎ Scones and sunshine seem to go together, no complaints.

The sun’s therapeutic value cannot be underestimated. Considering it is around 95 million miles away (four or five minutes for the light to reach us at 186,600 miles per second), the distance; feeling its warmth is something we take for granted. It has always been there; although the solar system within the Milky Way is rather insignificant being on the edge of one of the ‘spirals’. ‎And the Universe was created around 15 billion years ago as a result of the big bang, or Divine Creation?

Back to planet Earth, the February weather; a variety of cold spells accompanied by torrential rain or with luck, lots of snow. Snow!? Snow transports me back to childhood and later, the sixties and Bob Dylan. Did it really snow just in time for Christmas or during the school holidays?

Dylan’s ‘Mr. Tambourine Man’ is my all-time favorite, be it raining, snowing or sunshine.‎

‘To dance beneath the diamond sky with one hand waving free…….’ 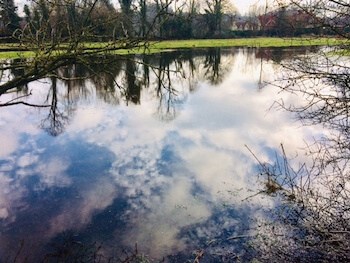 When walking along a riverbank on a sunny day, sun high in the sky during summer months, light shines on the surface presenting a display of mesmerizing reflections.

Wintertime offers a different perspective. Sunrise and sunset can be the most spectacular; no leaves to hide dawn’s awakening‎ and clear vistas as the sun sets. Colors galore – stunning, beautiful, lighting up clouds in myriad shades of glory.

River Itchen; poet Keats favorite walks. Beside this ancient and the few remaining chalk-based rivers; the only sound being the caressing of water by a gentle breeze. A swan gliding along the surface, occasionally lowering its head into the water in search of some delicacy. Or if one is lucky, witnessing the spectacular take-off by usually more than one swan. Or the landing; a graceful splash!

Onward through tree-lined river walk, branches, and twigs waiting with patience for the season of revival; Nature’s rebirth.

Imagine. Close the eyes, let the heart drift, to be embraced by Nature, allowing a non-visible focus, blessing, enhancing the senses beyond imagination.

Stop and listen; free the heart and senses. There is an invisible element; not silent, but the whole scene alive with Nature’s sounds, sparrows chirping, blackbirds singing with their hearts, ducks quacking; they always sound as though they’re arguing,  pigeons cooing for a friend or lover. Ring-necked doves, their cooing naturally rather well-toned and awfully elegant!

‎There is a wider presence as if the air we breathe possesses tangibility, alive with a myriad species of the natural environment.

Think of deep snow; blanketing sound, absorbing sound; that is the feeling experienced, snow or no snow. 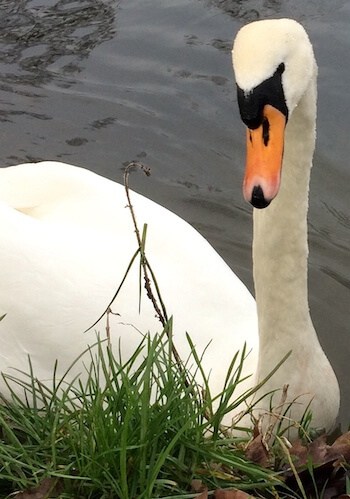 Out in the woodlands, one is wrapped in a dream-like state of awe. Blackbirds moving through fallen leaves, creating a distinct rustling sound as they seek out something to eat.

Believe me, I have walked the pristine natural ways many times; at least once a week or more. There is always something unseen on previous walks; something new to witness

Be the sky blue, be it cold or warm,  countryside, rivers, and hills do not just beckon, but call as if summoning one to join the heaven-sent joys of Mother Nature.

One is transported to another level of consciousness; to float or fly; to be part of and to celebrate peace, tranquility, and beauty.

Awareness of much-dreamt rapport with Nature’s treasure; freedom to be at one with the countryside, where those who are open-minded, accept the privileged rewards of sights, sounds, and scents.

The tall grass beneath my feet, a brushing sound;  aroma of late winter; Spring holding her breath in a form of ceremony awaiting the call to enlighten lives in expectation of those willing to absorb and recognize the Universe of all things that are there in reality, but expand with imagination.

Never to be taken for granted.