There is a long legacy of using music to reach people in ways that Gantt charts and spreadsheets do not, from Nina Simone, Pete Seeger, through Joan Baez, Tracey Chapman, John Lennon, Prince, Marvin Gaye, Kate Bush and Billy Bragg et al.  I was moved by the plight of our EU Citizens caught in limbo by the UK Government’s attempts to use them as bargaining chips in our bizarre “Brexit” negotiations.  In some cases, this meant that people who had settled in my country and lived, worked etc. for decades were suddenly threatened with having to leave the place they call home, dividing families and friends alike.

Over some 3 years, various pressure groups have written letters, hired lawyers and so on to persuade our Government to change its policy on “EU Citizens caught in limbo. These appeals have largely fallen on deaf ears, being entirely rational in nature.  Yet, our Brexit referendum was won through the heart rather than the head.  I wondered what would somehow mainstream the stories and emotional journeys of these “Citizens of Nowhere”.  I thought music may be worth trying since music is the language of the emotions (Kant and Madonna).

The result was a poignant piece of music called “In Limbo”, a dance / EDM piece that contains soundbites from EU Citizens in 12 different languages, expressing feelings of hope, hopelessness, fear etc. associated with their situation.

“In Limbo” achieved number one status on Amazon for three days, beating chart entries from Ed Sheeran, Abba, and Kylie Minogue.  This is remarkable for a song produced in a basement studio with no established artist as a brand.  Even more remarkable is the back story of the song’s production in terms of creativity, collaboration and the use of technology to work globally.

Behind the stage: Design Thinking and Creativity

My original concept for the song was informed by listening to the song “Why does my heart feel so bad” by Moby.  In pure design terms, the song has a downbeat minor feel in the verse with a contrasting major lift in the chorus.  This perfectly fitted the mood I felt I needed to create.  Simply to have written a piece about feelings of isolation without a lift would have been too depressing for any commercial success.  The contrast between major and minor is one of the classic design principles for music and I blend design thinking with creativity in my work as a musician as well as my professional life as a business consultant and keynote speaker.

With a true professional, few instructions are needed.  Rachel pulled out the needed vocal gymnastics right the first time.

Working with my friend, a professional singer and voiceover artist Rachel Ashley, I had to communicate what I wanted to achieve at a distance.  Although Rachel and I have collaborated many times, we have never actually met in person.  I had previously played a slide guitar solo in the middle of the song as a draft idea.  I had wanted to throw it away as I felt it did not fit the overall electronic / EDM feel of the song.  However, when a few people listened to the demo, they insisted that I should keep it in, as they felt it was reminiscent of Pink Floyd’s David Gilmour.  I, therefore, explained the major to minor feel of the song and that I had something in mind vocally around the idea of “The Great Gig in the Sky” to Rachel.  With a true professional, few instructions are needed.  Rachel pulled out the needed vocal gymnastics right the first time.

Behind the stage: Collaboration, Creativity, and Technology

Due to advances in music technology, I was also able to gather voices from all over Europe and as far afield as Thailand to tell the tales of people’s hopes, fears, and experiences of being treated as “Citizens of Nowhere”.  Here are the basic technological facts behind the song’s production: 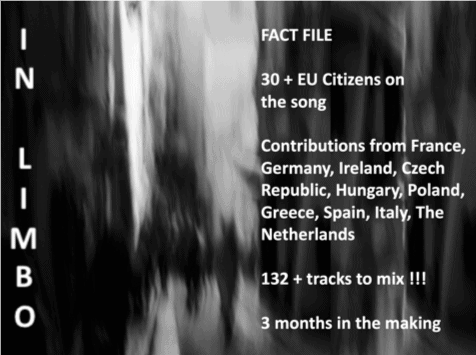 The song’s construction was essentially an emergent process, once I had laid down the musical “substructure”, laying in soundbites between the spaces in the music.  Given that these were spoken word pieces, this was especially difficult as the song relies on the words being audible throughout.

All the voice contributors were amateurs, save for a professional opera singer.  All required some level of coaching via Skype or similar, to help them refine a micro soundbite and record it insufficient quality for the song.  This is creativity under constraints, as each contributor had to sum up their feelings of being in limbo in under 7 seconds.  I also had to rehearse some to get their “voice” in the right place, so that the song flowed.  In the case of the German woman from Thailand, I nearly lost her contribution.  She sent some brilliant voice clips but all sounded as if she were using a vacuum cleaner whilst she was talking.  I made various enquiries and she became somewhat frustrated at having to do the clips several times.  I eventually worked out that her computer fan was working overtime in the Thai heat and this is what was causing the vacuum cleaner sound.  We switched to a phone with much better results!

“In Limbo” was conceived and produced with a cast from all over the world from my basement studio, with the help of Rachel Ashley and a supremely great animated film from Mark Duffy.  Comparisons have been made with Brian Eno, Leftfield, Pink Floyd and Prince.  Judge for yourself:

Our latest piece of music seeks to ghostbust some of the myths of Brexit populism.  It also reaches for the heart rather than the head.  A unique synthesis of the French love anthem “Je T’aime”, Hard Rock, Hard Brexit illusions and women in Brexstacy.  Find “Take Back Control” on iTunes and Amazon.